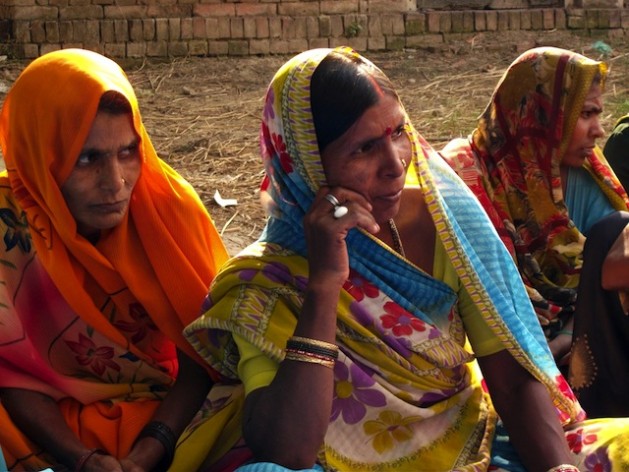 Increasing levels of violence across India due to ethnic tensions and armed insurgencies are taking their toll on women and cutting off access to crucial reproductive health services. Credit: Stella Paul/IPS

BASTAR, India, Sep 26 2014 (IPS) - Twenty-five-year-old Khemwanti Pradhan is a ‘Mitanin’ – a trained and accredited community health worker – based in the Nagarbeda village of the Bastar region in the central Indian state of Chhattisgarh.

Since 2007, Pradhan has been informing local women about government health schemes and urging them to deliver their babies at a hospital instead of in their own homes.

Ironically, when Pradhan gave birth to her first child in 2012, she herself was unable to visit a hospital because government security forces chose that very day to conduct a raid on her village, which is believed to be a hub of armed communist insurgents.

“I have seen women trying to use home remedies like poultices to cure sepsis just because they don’t want to run into either an army man or a rebel." -- Daniel Mate, a youth activist from the town of Tengnoupal, on the India-Myanmar border
In the panic and chaos that ensued, the village all but shut down, leaving Pradhan to manage on her own.

“Security men were carrying out a door-to-door search for Maoist rebels. They arrested many young men from our village. My husband and my brother-in-law were scared and both fled to the nearby forest.

“When my labour pains began, there was nobody around. I boiled some water and delivered my own baby,” she said.

Thanks to her training as a Mitanin, which simply means ‘friend’ in the local language, Pradhan had a smooth and safe delivery.

But not everyone is so lucky. Increasing levels of violence across India due to ethnic tensions and armed insurgencies are taking their toll on women and cutting off access to crucial reproductive health services.

This past June, for instance, 22-year-old Anita Reang, a Bru tribal refugee woman in the conflict-ridden Mamit district of the northeastern state of Mizoram, began haemorrhaging while giving birth at home.

The young girl eventually bled to death, Anita’s mother Malati told IPS, adding that they couldn’t leave the house because they were surrounded by Mizo neighbours, who were hostile to the Bru family.

According to Doctors Without Borders (MSF), a global charity that provides healthcare in conflict situations and disaster zones across the world, gender-based violence, sexually transmitted infections including HIV, and maternal and neonatal mortality and morbidity all increase during times of conflict.

This could have huge repercussions in India, home to over 31 million women in the reproductive age group according to the United Nations Population Fund (UNFPA).

There is a dearth of comprehensive nationwide data on the impact of conflict on maternal health but experts are agreed that it exacerbates the issue of access to clinics and facilities.

But according to Waliullah Ahmed Laskar, an advocate in the Guwahati High Court in the northeastern state of Assam, who also leads a rights protection group called the Barak Human Rights Protection Committee, women wishing to access government programmes must travel to an official health centre – an arduous task for those who reside in conflict-prone regions.

In central and eastern India alone, this amounts to some 22 million women.

There is also a trust deficit between women in a conflict area and the health workers, Laskar told IPS. “Women are [often] scared of health workers, who they think hold a bias against them and might ill-treat them.”

For Jomila Bibi, a 31-year-old Muslim refugee woman from Assam’s Kokrajhar district, such fears were not unfounded; the young woman’s newborn daughter died last October after doctors belonging to a rival ethnic group allegedly declined to attend to her.

Bibi was on the run following ethnic clashes between Bengali Muslims and members of the Bodo tribal community in Assam that have left nearly half a million people displaced across the region.

Daniel Mate, a youth activist in the town of Tengnoupal, which lies on India’s conflicted border with Myanmar, recounted several cases of women refusing to seek professional help, despite having severe post-delivery complications, due to compromised security around them.

“When there is more than one armed group [as in the case of the armed insurgency in Tengnoupal and surrounding areas in northeast India’s Manipur state], it is difficult to know who is a friend and who is an enemy,” he told IPS.

“I have seen women trying to use home remedies like poultices to cure sepsis just because they don’t want to run into either an army man or a rebel,” added Mate, who campaigns for crowd-funded medical supplies for the remotest villages in the region, which are plagued by the presence of over a dozen militant groups.

The solution, according to MSF’s Jones, is an overall improvement in comprehensive maternal care including services like Caesarean sections and blood transfusions.

Equally important is the sensitisation of health workers and security personnel, who could persuade more women to seek healthcare, even in troubled times.

According to Kaushalendra Kukku, a doctor in the Kanker government hospital in Bastar, “When violence erupts, all systems collapse. The best way to minimise the risk of maternal death in such a situation is to take the services to a woman, instead of expecting her to come to [the services].”

Pradhan, who has now resumed her duties as a community health worker, agrees. “I was able to deliver safely because I was trained. If other women receive the same training, they can also help themselves.”