GENEVA, Oct 23 2014 (IPS) - As Juan Evo Morales Ayma, popularly known as ‘Evo’, celebrates his victory for a third term as Bolivia’s president on a platform of “anti-imperialism” and radical socio-economic policies, he can also claim credit for ushering in far-reaching social reforms such as the Bolivian “Law against Political Harassment and Violence against Women” enacted in 2012.

“In many countries women in the political arena, whether candidates to an election or elected to office, are confronted with acts of violence ranging from sexist portrayal in the media to threats and murder,” says the World Future Council (WFC), which monitors the gap between policy research and policy-making.

Speaking to IPS after the 2014 Future Policy Award for Ending Violence against Women and Girls ceremony, organised by WFC, the Inter-Parliamentary Union (IPU) and UN Women on Oct. 14, WFC founder Jacob von Uexkull told IPS that the Bolivian law “is a visionary law, particularly for protecting women against political harassment and violence.”

“Achieving gender equality and ending violence against women and girls is a matter for both men and women ... violence against women is a human rights violation but also a social and public health problem, and an obstacle to development with high economic and financial costs for victims, families, communities and society as a whole” – Martin Chungong, IPU Secretary-General

“For the first time we introduced the category of what are called visionary laws which aim to curb violence against women in politics and other professions,” he said, adding that the passing of such a law in Bolivia is “very significant”, suggesting that other should emulate the Bolivian example.

The law against political harassment and violence against women was enacted in Bolivia by the Morales government following the assassination of Councillor Juana Quispe after she had complained about the abuse she suffered from other councillors and the mayor of her town. The law defines political harassment and political violence as criminal offences which carry imprisonment ranging from two to eight years depending on the magnitude of the offence.

The WFC, which promotes the world’s best laws and solutions for implementation by policy-makers in countries all over the world, chose to offer the “honourable mention” for the Bolivian law in the visionary category.

Based in Hamburg, Germany, the WFC was set up in 2007 to pioneer the campaign for the spread of best laws in different areas. Beginning in 2009, the WFC has been offering the Future Policy Award (FPA) for the strongest laws in the field of sustainable development.

Last year, the FPA went to the treaty for the prohibition of nuclear weapons in Latin America and the Caribbean.

With 2014 having been designated by WFC as the year for ending violence against women and girls, UN Women Executive Director Phumzile Mlambo-Ngcuka says that governments must adopt a “comprehensive legal framework” that addresses violence against women, by “recognising unequal power relations between men and women” and advocating a “gender-sensitive perspective in tackling it.”

According to Martin Chungong, Secretary-General of IPU, the key message is that “achieving gender equality and ending violence against women and girls is a matter for both men and women.” Moreover, “violence against women is a human rights violation but also a social and public health problem, and an obstacle to development with high economic and financial costs for victims, families, communities and society as a whole.” 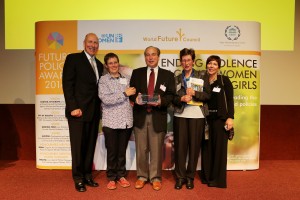 Michael Paymar (centre), member of the Minnesota House of Representatives, along with others behind the ‘Coordinated Community Response to Domestic Violence’ programme of Duluth, Minnesota, winner of this year’s gold Future Policy Award (FPA). Credit: Courtesy of World Future Council

This year’s WFC gold award went to the “Coordinated Community Response to Domestic Violence” programme of the City of Duluth in the U.S. state of Minnesota. Among others, said von Uexkull, the “Duluth model” has a shared philosophy about domestic violence and a system that shifts responsibility for victim safety from the victim to the system.

The “Duluth model” has helped countries formulate laws and policies based on the principles of coordinated community response and paved the way for the intervention of criminal justice in cases of intimate partner violence.

Each year, an estimated 1.3 million women are victims of physical assault by an intimate partner.

According to von Uexkull, such violence entails huge human, social, and economic costs which are estimated to be around 5.18 percent of world GDP.

HBO (Home Box Office), a U.S. pay television network, has recently produced a documentary entitled Private Violence, which looks at domestic violence against women. In an interview with The Guardian, Cynthia Hill, the documentary’s director, said: “The thing that I did not know that was so revealing to me was that anywhere between 50 percent and 75 percent of domestic violence homicides happen at the point of separation or after [the victim] has already left [her abuser].”.

One of the biggest issues facing women and girls today in the world, says Nyaradzayi Gumbonzvanda, General Secretary of the Young Women Christian Association (YWCA), is violence. “I see the violence against women as a manifestation of inequalities, disempowerment and exclusion,” Gumbonzvanda told IPS. “It is the accumulation of many realities that women find in their own lives, particularly that of social disempowerment.”

To highlight the importance of enforcing and implementing existing laws to eradicate violence against women, the WFC gave awards this year to Austria and Burkina Faso for their stringent implementation of laws to protect women against violence. “When the justice system and specialised service providers work hand in hand, real progress can be made,” said von Uexkull.

However, as countries are preparing to celebrate the 20th anniversary of the Fourth World Conference on Women in Beijing, there is not a single country in the world where we have succeeded in eliminating violence against women, warns Gertrude Mongella, Secretary-General of the Beijing conference, former President of the Pan-African Parliament and WFC Honorary Councillor from Tanzania.

“Many countries now have laws that protect women from violence,” Mongella told participants at the FPA ceremony. “However, women who report violence often face a range of challenges, including resistance or disbelief from law enforcement officers, judges and lawyers.”