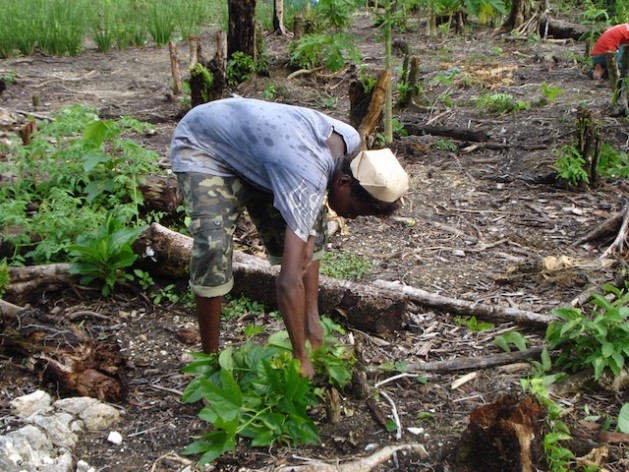 Customary land remains a vital source of food security, cash incomes and social wellbeing in Pacific Island countries, such as Vanuatu, where formal employment is only 20 percent. Credit: Catherine Wilson/IPS

PORT VILA, Oct 14 2014 (IPS) - Stemming widespread corruption in the leasing of customary land to investors is the aim of bold land reform, introduced this year in the Southwest Pacific Island state of Vanuatu, which puts the rights of traditional landowners above the discretionary powers of politicians.

Less than one hour from the capital, Port Vila, is the village of Mangaliliu, one of many across this sprawling nation of 82 islands and more than 247,000 people where livelihoods centre on agriculture and fishing.

Here, villagers are battling the loss of their traditional land due to a lease negotiated without their consent.

“We thought the tourism business or selling our land would give us work and employ a lot of our people, but now we realise we made a mistake." -- Mangaliliu’s Chief Mormor
“Somebody from another village leased one piece of our land to an investor. I tried to stop him. When he started bulldozing the land, I went with my people and took palm leaves, which we use as a sign of [something that is] taboo [forbidden]. We hung them all along the road and the case is now in court,” Mangaliliu’s Chief Mormor recounted.

Pristine coastlines and sea views on the country’s main island of Efate have attracted foreign investors interested in property and tourism development and now an estimated 56.5 percent of coastal land on the island has been leased for periods up to 75 years.

More than 80 percent of land in Vanuatu is customary, with ownership held by extended families, who are custodians for the next generation. Rights of use for farming or commercial enterprises are decided by group consensus, as are proposals on leasing to other parties. The importance of land to the culture, identity, food security and social wellbeing of Pacific Islanders is reflected in most national laws, which only allow the lease – not sale – of customary land.

Yet today with the penetration of the cash economy land has also become a source of windfalls to villagers and politicians alike.

“People have learned that if they sell [lease] one piece of land they can buy a car, satellite dish or speedboat,” Mormor said. “It can take many years to save this sort of money, so it is just like a miracle if you sell land.”

However under group custodianship conflict can quickly arise if, for example, “I have a brother who sells a piece of land and doesn’t ask permission of me or my sister, or my children, or my sister’s children,” he added.

In the past, the lands minister could personally decide on disputed leases. The World Bank’s Justice for the Poor programme reports that 21.4 percent of all new leases since the country’s independence in 1980 have been signed under this provision. Last year alleged improper land dealings accounted for almost two-thirds of lawsuits against the government.

Now, the ambitions of land reform by indigenous leader Ralph Regenvanu, who was appointed lands minister in 2013, have become a reality.

In December last year new laws were passed making it mandatory that all members of customary landowner groups give their prior informed consent to any leases over their land. Potential investors must apply to a land management planning committee for approval to conduct negotiations with custom owners. Two customary institutions, Nakamals and Custom Area Land Tribunals, will decide the outcome of disputes, rather than the courts.

According to Regenvanu, investor confidence will increase because now when “you get a lease you can be assured that it was gained lawfully.” But he also believes that the economic and social security which land provides to his people will be strengthened.

Steve Namali of the Vanuatu National Council of Chiefs in Port Vila commented that, while consultation on the reforms had not been conducted nationwide, he believed they would help address the fraudulence of land deals in the past.

With adult literacy in the province estimated at 27.6 percent, the greater thoroughness of the approval process should also improve local awareness of the ramifications of entering into land agreements. For example, reclaiming land on a lease expiry often requires compensation to the lessee for developments, even though many villagers do not have the financial means to reimburse an investor the value of a tourist resort or luxury home.

Local communities often “don’t understand what is going to happen in the long term” and that most likely “at the end of a lease, it [land] will never come back to traditional tenure,” Joel Simo of the Melanesian Indigenous Land Defence Alliance (MILDA), a regional civil society landowner solidarity network, said in Port Vila.

“There is now a process in place that has to be followed and it will stop individuals going and doing their own thing,” he said. “It has been a good change for Vanuatu, especially because of this land boom and people selling land left, right and centre.”

International investors from Australia, Europe and Asia have largely driven growth in the real estate market, along with the nation’s tax haven status. In 2012, foreign direct investment (FDI) amounted to 37.7 million dollars or 4.8 percent of GDP, but Mormor claims local people have seen few benefits.

“We thought the tourism business or selling our land would give us work and employ a lot of our people, but now we realise we made a mistake,” he said.

Despite average GDP growth of four percent over the past decade, with a high of 8.5 percent in 2006, an estimated 40 percent of people have incomes below the poverty line.

“I think people want development, but what type of development and in whose interests?” Simo queried. He believes protecting indigenous landownership makes sense when the traditional economy, which includes subsistence and smallholder agriculture, is the biggest employer in Melanesia.

In comparison, “many [formal sector] jobs available involve cheap labour and that only gets people into more poverty,” he said. Formal employment in Vanuatu is only 20 percent and the average local wage is 316 dollars per month. So, he continued, “If you don’t have a job, you fall back to the land,” which is the only safety net.

Mormor now wants to retain his land for community-driven projects, such as fish farming and coconut oil production. He is happy that the new laws will help protect the land for his children, but also admits the more thorough land registration and approval process, if he engages with development partners, will take much longer than in the past.

“I could be dead when these projects start,” he laughs.

While Vanuatu’s new laws are popular, it remains to be seen how well they work, and if they eliminate political cronyism.