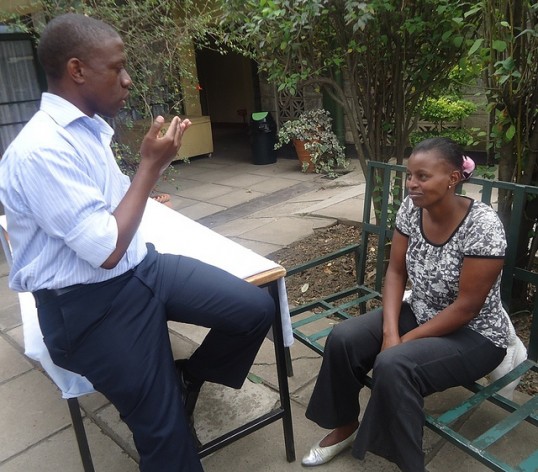 Monica Wambui, 37, who is deaf, receives HIV/AIDS information in sign language. Wambui was among more than 40 people with disabilities who attended a workshop organised by the USAID-funded APHIAplus Nuru ya Bonde project in Nakuru, Kenya. Credit: USAID/George Obanyi

NEW YORK, Nov 28 2014 (IPS) - Jane is a young Zambian mother with a physical disability in Lusaka, who uses a wheelchair to get around. She does not let clinics without ramps or without wheelchair accessible toilets and equipment stop her from claiming her right to health care, including HIV prevention services.

“You have to go the clinic to test yourself, to know your status – you have to force yourself, even crawling, so that the government can see that the clinics are not user-friendly,” she told Human Rights Watch.

Faith, 25, a deaf, HIV-positive woman in Zambia, lost her hearing when she contracted cerebral malaria at the age of five. Faith did not know about HIV prevention until she tested positive in 2012.

In local communities, legislatures and at the United Nations, people with disabilities like Jane are demanding their right to equal access to HIV services. Not only on Dec. 1, World AIDS Day, but every day.

This week we also observe the international day of persons with disabilities. This coincidence of the calendar is not a coincidence for millions of people with disabilities around the globe who may have never received any information on HIV and are unable to access HIV prevention, treatment and care services.

Yet they are at increased risk of HIV infection because of discrimination in schooling, poverty and greater risk of physical and sexual violence.

Faith, 25, a deaf, HIV-positive woman in Zambia, lost her hearing when she contracted cerebral malaria at the age of five. She dropped out of school after only a few years because her family could not afford the transportation costs to send her there, and in any case did not believe she would benefit from schooling.

Today, Faith cannot read and communicates through a mix of formal sign language and informal signs that are understood and translated by her brother.

Faith did not know about HIV prevention until she tested positive in 2012. HIV prevention meetings in her local community are not conducted in sign language. And even if Faith had been able to continue her schooling, she likely would not have learned about HIV because of the lack of accessible materials and peer-based HIV prevention programmes for children with disabilities.

Faith found out that she was HIV-positive after giving birth to her daughter, who is also HIV-positive. Her husband is abusive and often absent. Faith relies on her mother to accompany her to appointments for antiretroviral medication and to help her understand information about care and treatment for her and her baby. There is usually no sign language interpreter at the clinic she visits.

A healthcare worker at her clinic told Faith and her mother that someone like Faith should not be allowed to have any more children.

But these barriers, and stigmatising attitudes, are starting to change.

In its 2014 ‘Gap Report’, UNAIDS recognised people with disabilities as one of the 12 vulnerable populations left behind by the AIDS response.

In Zambia, where more than one in 10 adults are living with HIV, and a similar number of people are estimated to have a disability, the government could recognise people with disabilities as a key population within the national HIV response, who should be prioritised for targeted action.

A disability-inclusive approach to HIV policies and national strategic plans is critical for countries in eastern and southern Africa, which remain the epicentre of the HIV pandemic.

Disabled persons’ organisations (DPOs) as well as other disability and health organisations in the region are also working hard to promote and develop inclusive and targeted HIV and sexual and reproductive health services.

Zambia Deaf Youth and Women (ZDYW), a local organisation from the Copperbelt province for example, has been supporting training of deaf counselors to provide peer-based HIV testing services in the region.

This year the U.S. President’s Emergency Plan for AIDS Relief (PEPFAR) in Zambia will recognise a number of ‘PEPFAR Champions’ who are promoting equal access to HIV services for people with disabilities.

This is a good start, but more needs to be done, and quicker, to draw broader attention to the needs of individuals with disabilities in HIV services and to integrate HIV issues within all disability work. This requires resources, specific budgetary provisions, donor funding allocations and data collection on disability.

The Zambian HIV/TB activist and advocate for disability rights, Winstone Zulu, would have turned 50 this year that marks half a centenary of Zambia’s independence. In this week that recognises both the global AIDS pandemic and the more than one billion people worldwide who have a disability, Zambia should honor his and others’ struggle for equal access to HIV services, and implement inclusive HIV services as a priority, to ensure that people with disabilities such as Jane and Faith no longer remain invisible in the fight against HIV.