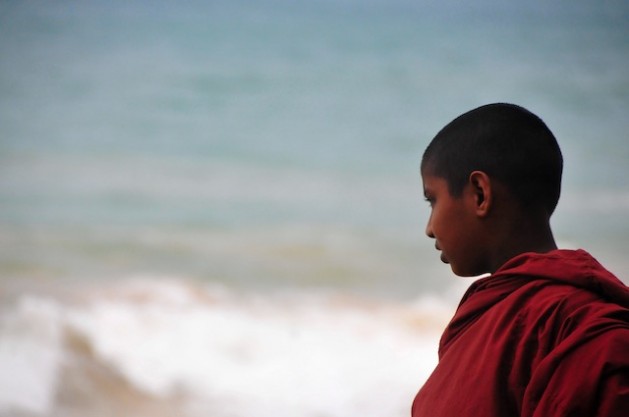 A novice monk stares at the sea, after taking part in commemoration events to mark the 10th anniversary of the Asian tsunami in Sri Lanka’s southern town of Hikkaduwa. Credit: Amantha Perera/IPS

KALMUNAI, Sri Lanka, Dec 31 2014 (IPS) - About six months after a massive tsunami slammed the island nation of Sri Lanka on Dec. 26, 2004, large plumes of smoke could be frequently seen snaking skywards from the beach near the village of Sainathimaruthu, just east of Kalmunai town, about 300 km from the capital, Colombo.

A petrified population had devised a makeshift early-warning system that would alert their fellow villagers of any incoming tsunami – burning rubber tires on the sand by the sea.

Residents of small coastal villagers would regularly look up from the task of removing rubble or repairing their demolished houses to check if the dark, smoky trails were still visible in the sky.

“You have to face a monstrous wave washing over your roof, taking everything in its path, to realise that you can’t drop your guard, ever." -- Iqbal Aziz, a tsunami survivor in eastern Sri Lanka
“If the smoke vanished, that meant the waves were advancing and we had to move out,” explained Iqbal Aziz, a local from the Kalmunai area in the eastern Batticaloa District.

Their fears were not unfounded. The villages of Maradamunai, Karativu and Sainathimaruthu, located 370 km east of Colombo, bore the brunt of the disaster, recording 3,000 deaths out of a total death toll of 35,322.

Humble homes, built at such close quarters that each structure caressed another, were pulverized when the waves crashed ashore the day after Christmas. What scared the villagers most was the shock of it all, with virtually no warnings issued ahead of the catastrophe by any government body.

In retrospect, there was plenty of time to relocate vulnerable communities to higher ground – it took over two hours for the killer waves to reach Kalmunai from their origin in northwest Indonesia. But the absence of official mechanisms resulted in a massive death toll.

Trauma and paranoia led to the makeshift early-warning system, but 10 years later the villagers have stopped looking to the sky for signs of another disaster. Instead, they check their cell phones for updates of extreme weather events.

The new system, fine-tuned throughout the post-tsunami decade, is certainly an improvement on its predecessor. Just last month, on Nov. 15, a huge 7.3-magnitude offshore earthquake was reported about 150 km northeast of Indonesia’s Malaku Islands. Villagers like Aziz only had to consult their mobile phones to know that they were in no danger, and could rest easy. 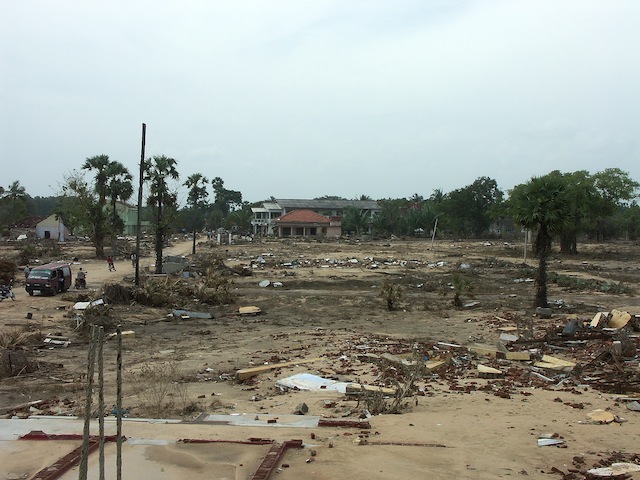 “The tsunami was like a wake-up call,” Ivan de Silva, secretary of the ministry of irrigation and water management, told IPS.

Besides the tragic death toll, the reconstruction bill – a whopping three billion dollars – also served as a jolt to the government to lay far more solid disaster preparedness plans.

Dealing with the destruction of 100,000 homes and buildings, and coordinating the logistics of over half a million displaced citizens, provided further impetus for creating a blueprint for handling natural catastrophes.

Now, less than a decade later, it has offices in all of the country’s 25 districts, and carries out regular emergency evacuation drills to prep the population for possible calamities.

In April 2012, the DMC evacuated over a million people along the coast following a tsunami warning, the largest exercise ever undertaken in Sri Lanka’s history.

But the national plan is far from bullet proof. As Sarath Lal Kumara, assistant director of the DMC, told IPS: “Maintaining preparedness levels is an on-going process and needs constant attention.”

In fact, glaring lapses in disaster management continue to cost lives on an island increasingly battered by extreme weather events.

The latest such incident occurred during the same week as the 10th anniversary commemoration of the tsunami, when heavy rains lashed the northern and eastern regions of the country.

By the time the rains eased, 35 were dead, three listed as missing, a million had been marooned and over 110,000 displaced. Most of the deaths were due to landsides in the district of Badulla, capital of the southern Uva Province.

Unfortunately, two months ago, another village in the same district suffered multiple fatalities due to landslides. On Oct. 29, in the hilly village of Meeriyabedda, located on the southern slopes of Sri Lanka’s central hills, a landslide prompted by heavy rains killed 12 and 25 have been listed as missing. 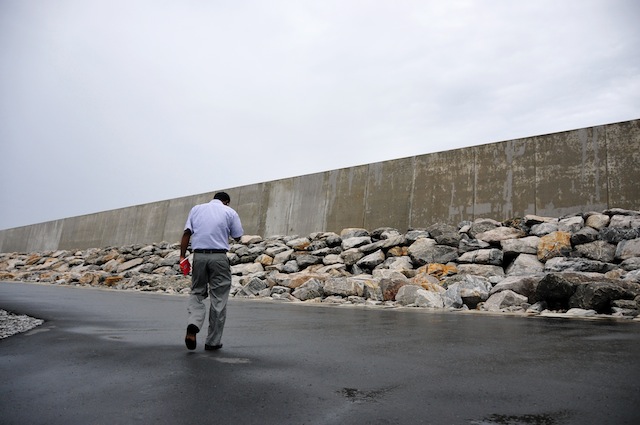 A man walks past the 10-foot wall near the boundary of the Southern Extension of the Colombo harbour, which was built as a protective measure against a future tsunami. Credit: Amantha Perera/IPS

There was no clear early warning disseminated to the villagers, despite the National Building Research Organisation (NBRO) issuing warnings several days before of possible landslides. Nor was any pre-planning undertaken using NBRO hazard maps that clearly indicated landslide risks in the villages.

The twin tragedies were not the first time – and probably won’t be the last – that lives were lost due to failure to effectively communicate early warnings.

In November 2011, 29 people died in the Southern Province when gale-force winds sneaked up the coast unannounced. In July 2013, over 70 were killed in the same region, largely because fisher communities in the area were not informed about the annual southwest monsoon moving at a much faster speed than anticipated.

“We need a much more robust early warning dissemination mechanism, and better public understanding about such warnings,” DMC’s Kumara said.

According to the U.N. Office for Disaster Risk Reduction (UNISDR), around 500,000 Sri Lankans are impacted directly by natural disasters each year. The average death toll is roughly 1,200.

The island of little over 20 million people also needs to factor in damages touching 50 million dollars annually due to natural disasters, the most frequent of which historically have been floods caused by heavy rains.

The latter point – cultivating awareness among the general public – is perhaps the single most important aspect of a comprehensive national plan, according to experts.

The recent landslide proved that simple trainings alone are not sufficient to prompt efficient responses to natural disasters.

Meeriyabedda, for instance, has been the site of numerous training and awareness programmes, including a major initiative carried out in conjunction with the Sri Lanka Red Cross Society (SLRCS) in 2009 that involved mock drills and the distribution of rain gauges and loudspeakers to locals in the area.

Yet there was no evidence to suggest that villagers used the training or equipment prior to the landslide.

R M S Bandara, head of the NBRO’s Landslide Risk Research and Management Division, told IPS that while extensive maps of the island’s hazard-prone areas are freely available, they are not being put to good use.

“Not only the [general] public but even public officials are not aware of disaster preparedness. It still remains an issue that is outside public discussions, [except] when disasters strike,” he asserted.

Currently, only those who have faced disasters head-on understand and appreciate the need to think and act at lightening-quick speeds. “You have to face a monstrous wave washing over your roof, taking everything in its path, to realise that you can’t drop your guard, ever,” Aziz said.