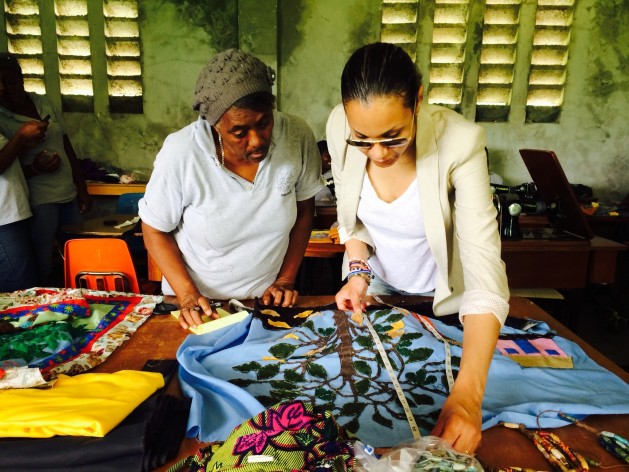 With that in mind, Italian-born Cipriani founded a programme in 2009 called the Ethical Fashion Initiative (EFI) that links some of the world’s top fashion talents to marginalised artisans – mostly women – in East and West Africa, Haiti and the West Bank.

Now a flagship programme of the International Trade Centre, a joint agency of the United Nations and the World Trade Organization (WTO), the Geneva-based EFI works with leading designers such as Stella McCartney and Vivienne Westwood to facilitate the development and production of “high-quality, ethical fashion items” from artisans living in low-income rural and urban areas.

The EFI says its aim is also to “enable Africa’s rising generation of fashion talent to forge environmentally sound, sustainable and fulfilling creative collaborations with local artisans.” Under its slogan “not charity, just work”, the Initiative advocates for a fairer global fashion industry.

“We work with women who sometimes face discrimination in their communities, but by having a job, their position in society improves. They gain independence and respect, and in many situations they become the only breadwinner in their families” – Simone Cipriani, Ethical Fashion Initiative

This year, for the first time, the EFI is collaborating with the most important international trade fair for men’s fashion, Pitti Immagine Uomo, to host designers who represent four African countries.

Taking place June 16 to 19 in Florence, Italy, the fair will present a special edition of its Guest Nation Project, in which a particular area is designated for the “rising stars” of fashion from various countries, according to Raffaello Napoleone, CEO of Pitti.

Napoleone said that the African designers in this year’s Guest Nation give priority to manufacturing in their home countries, helping to reduce poverty, and that they are already known on the international market.

The stylists will put on a runway show, highlighting their men’s collections, in a special event titled ‘Constellation Africa’. The brands – Dent de Man, MaXhosa by Laduma, Orange Culture and Projecto Mental – have designers who represent Cote d’Ivoire, South Africa, Nigeria and Angola, and were selected as part of the African Fashion Designer competition launched by the EFI last December.

“This is where our global society is going: interconnectedness. Global and local dimensions brought together through fashion,” said Cipriani.

Market analysts expect the global value of the apparel retail industry to rise about 20 percent from 2014 levels to reach some 1,500 billion dollars in 2017. With such high volumes, the various sectors of the industry could be an increasing source of employment in many regions, from design to garment-making to sales.

But over the past several years, there has been controversy about the apparent exclusion of fashion designers and models of African descent in high-profile ‘Fashion Weeks’ and other international events

Tansy E. Hoskins, author of a polemical book published last year titled Stitched Up: The Anti-Capitalist Book of Fashion, has a whole chapter devoted to the question “Is Fashion Racist?”

She says that several decades after a renowned fashion magazine had its first black model on the cover, “all-white catwalks, all-white advertising campaigns and all-white fashion shoots are still the norm”. 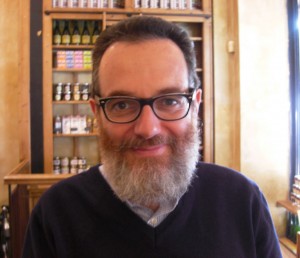 The Ethical Fashion Initiative is primarily concerned with poverty reduction and ethical treatment of artisans, but Cipriani acknowledges that racism is an issue and that poverty can be linked to ethnicity as well as gender.

Still, the fashion industry does have companies that try to adhere to ethical standards, including diversity, working conditions and environmental sustainability; and 30 international brands have signed on to the EFI project. But not every company is a good fit.

“We try to work almost exclusively with brands that have a clear scheme on responsible business and social engagement, otherwise there’s always the risk of being used and having to clean up after somebody else,” Cipriani told IPS in an interview, during a trip to Paris to meet with designers.

“We’ve had our troubles and have had to work through a long learning curve”, he added. “We also tried to work with big distributors and realised it wasn’t possible for what we do, so here we are.”

Groups such as the EFI and activists like Hoskins say that their major concern is how to make the fashion industry fairer, particularly with decent labour conditions for workers everywhere.

Two years ago in Bangladesh, for instance, more than 1,100 workers died and 2,500 were injured when a factory building collapsed after safety warnings were ignored. The workers made clothing for brands including Benetton, which only this year announced that it would contribute to a compensation fund for the victims.

That agreement followed a campaign in which one million people signed an online petition calling for the company to take proper action.

“What happened in Bangladesh was a horror, and there are many situations in which exactly the same horror can occur,” Cipriani said. “The first thing about responsibility should always be people. Dignified working conditions for people.”

He said that many artisans working in the fashion industry’s supply chain also do not earn enough to live on. “They don’t get the remuneration for their work that allows them to have a dignified life,” he told IPS. “Many of them are paid in such a way that they have to live at the margin.”

In Haiti, which is known for its artistry as well as its poverty, activists say that linking local artisans with international designers can and have made some impact. The Haitian-Italian designer Stella Jean has been working with EFI, using Haitian craftsmanship in areas such as embroidery and beadwork in her collections, for example. She also employs textiles made in Africa.

Jean has been an EFI “partner” since 2013 and she sources several elements of her designs through its projects, Cipriani said. The collaboration started with a visit to Burkina Faso – one of the largest producers of cotton in Africa with an important tradition of hand-weaving – where the designer saw the possibilities of “working with these ethically produced textiles”. She incorporated them as a key feature of her women’s and men’s ready-to-wear collections.

Last year, she also launched a new range of bags, produced in Kenya with fabric from Burkina Faso and Mali and vegetable-tanned leather from Kenya, “making each bag a pan-African product,” says the EFI.

In Kenya, British designers McCartney (who declined to be interviewed) and Westwood have placed several orders for fashion items, and the EFI has carried out “Impact Assessment” studies to evaluate compliance with fair labour standards “and the impact the orders had on people and the communities they live in.”

“We work with women who sometimes face discrimination in their communities, but by having a job, their position in society improves,” Cipriani told IPS. “They gain independence and respect, and in many situations they become the only breadwinner in their families.”

The Ethical Fashion Initiative has testimonials from artisans about the improvement in their lives from the income they received through the orders, with several workers detailing their new ability to pay rent and school fees, among other developments.

Hoskins says that these steps are important, but that the fashion industry cannot be fully transformed without massive, collective action. “Ethical fashion has become a catch-all phrase encompassing issues such as environmental toxicity, labour rights, air miles, animal cruelty and product sustainability,” she argues.

“After 20 or so years and despite some innovative initiatives, it holds an ‘exceptionally low market share’ at just over 1 percent of the overall apparel market.”

“There are small companies doing things differently but they’re producing maybe a few thousand units every year. The fashion industry produces billions and billions of units every single year.”

Hoskins also asked the question: “Why is it not the case that all products are ethically made?”

But reform evidently takes time. With the Pitti trade fair in Italy now collaborating with EFI, the “ethical fashion” movement may get a boost. It is also up to consumers to make the right choices, activists say.