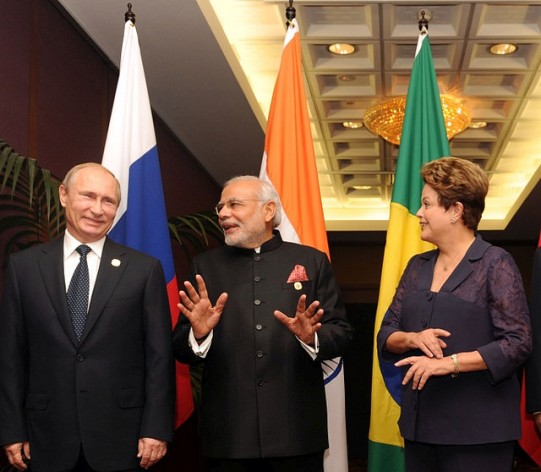 The heads of state of three of the five BRICS countries - Russia, India and Brazil – pose for a photograph during the 2014 BRICS Summit. Credit: Official Flickr Account for Narendra Modi/CC-BY-SA-2.0

UNITED NATIONS, Jul 7 2015 (IPS) - Just days ahead of a summit of the BRICS group of emerging economies (Brazil, Russia, India, China and South Africa) in which the five countries are expected to formally launch their New Development Bank (NDB), 40 NGOs and civil society groups have penned an open letter to their respective governments urging transparency and accountability in the proposed banking process.

“In terms of the type of development the bank delivers, we don't have signs yet that the NDB will go in a qualitatively different direction than the Washington Consensus institutions." -- Gretchen Gordon, coordinator of Bank on Human Rights
The NDB is expected to finance infrastructure and sustainable development in the global South.

With an initial capital of 100 billion dollars, it was born from a combination of circumstances including emerging economies’ frustration with the largely Western-dominated World Bank Group (WBG) and International Monetary Fund (IMF).

According to a 2014 Oxfam Policy Brief, another factor leading to the creation of the BRICS Bank was a major gap in financing for infrastructure projects, with official development assistance (ODA) and funding from multilateral institutions meeting just two to three percent of developing countries’ needs.

Strained by economic sanctions as a result of the Ukrainian crisis, Moscow has been particularly keen to bring the fledgling lending institution to its feet and has been pushing international rating agencies to rate the bank’s debt, as a necessary first step for it to begin operations.

Even without counting the contributions of its newest member – South Africa – the four BRIC nations represent 25 percent of global gross domestic product (GDP) and 41.4 percent of the world’s population, or roughly three billion people.

In addition, the borders of these countries enclose a quarter of the planet’s land area on three continents.

But even as the five political leaders prepare to take centre stage in the Russian city of Ufa on Jul. 9, citizens of their own countries are already expressing doubts that the nascent financial body will truly represent a break from traditional, Western-led development models.

“The existing development model in force in many emerging and developing countries is one that favors export-oriented, commodity driven strategies and policies that are socially harmful, environmentally unsustainable and have led to greater inequalities between and within countries,” said the statement, released on Jul. 7

“If the New Development Bank is going to break with this history, it must commit itself to the following four principles: 1) Promote development for all; 2) Be transparent and democratic; 3) Set strong standards and make sure they’re followed; 4) Promote sustainable development,” the signatories added.

Gretchen Gordon, coordinator of Bank on Human Rights, a global network of social movements and grassroots organisations working to hold international financial institutions accountable to human rights obligations, told IPS, “[Although] the Bank’s Articles of Agreement have an article on Transparency and Accountability […] thus far we haven’t seen any indication of operational policies on transparency or anything relating to accountability mechanisms.”

“And unfortunately,” she added, “there is no open engagement with civil society on these questions.”

“In terms of the type of development the bank delivers, we don’t have signs yet that the NDB will go in a qualitatively different direction than the Washington Consensus institutions,” Gordon told IPS in an email.

“That is why civil society groups in BRICS countries are calling for a participative and transparent process to identify strategies and policies for the NDB that can set it on a different path and actually deliver development.”

A primary concern among NGOs has been that the BRICS bank will replicate the old “mega-project” model of development, which has proven to be a failure both in terms of poverty eradication and increased access to basic services.

A recent international investigation revealed that in the course of a single decade, an estimated 3.4 million poor people – primarily from Asia, Africa and Latin America – were displaced by mega-projects funded by the World Bank and its private sector lending arm, the International Finance Corporation (IFC).

Though these projects were ostensibly aimed at strengthening transportation networks, expanding electric grids and improving water supply systems, they resulted in a worsening of poverty and inequality for millions of already marginalised people.

Following closely on the heels of this damning expose, a major report by the international watchdog Human Rights Watch (HRW) found that the Bank’s lax safeguards and protocols resulted in a range of rights violations against those who spoke out against the economic, social and environmental fallout of Bank-funded projects.

Behind this track record, rights groups and NGOs are concerned that a new development bank operating on within a broken framework will contribute to the spiral of violence and poverty that has marked the age of mega-projects.

At a time when one billion people lack access to an all-weather road, 783 million people live without clean water supplies and 1.3 billion people are not connected to an electricity grid, there is no doubt that the developing world stands to gain greatly from a Southern-led financial institution.

What remains to be seen is to what extent the new bank will move away from the old model of financing and truly set a standard for inclusive and pro-poor development.