KUMASI, Ghana, Jul 18 2012 (IPS) - At eleven years old, Thema, a native of Kumasi, hopes to be a nurse when she grows up. Currently, however, she is employed wandering between taxis and tro-tros or minibus taxis at rush hour, carrying packs of ice water on her head and selling them for 10 pesewas apiece. She manoeuvres through traffic in Ghana’s second-largest city with practiced ease; she has been doing this for four years.

Child labour is on the rise in Ghana, particularly in urban areas. According to the United Nations Children’s Fund’s (UNICEF) 2012 State of the World’s Children Report, 34 percent of Ghanaian children aged between five and 14 years are engaged in child labour – up from 23 percent in 2003. Emilia Allan, a Child Protection Officer at UNICEF Ghana, noted that Kumasi alone makes up eight percent of that figure.

She described some of the harmful impacts of child labour. 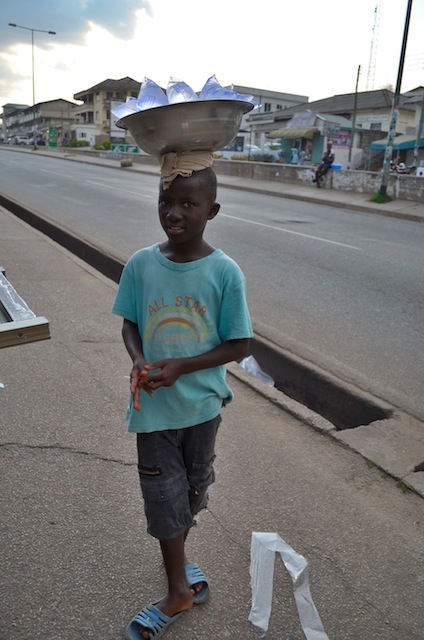 A young boy carries ice water on his head in Amakom, Kumasi. Any work that is detrimental to a child’s development is considered child labour in Ghana. Credit: Portia Crowe/IPS

“It infringes on the rights of children, it affects their health, and it may result in injury,” she said. “It prevents and interferes with their education, and it leads to other protection concerns such as sexual exploitation, violence, and child trafficking.”

But working children are generally accepted in Ghana, and the definition of child labour is hotly debated. Though the minimum legal age of employment is 15 years, the 1998 Children’s Act stipulates that children aged 13 and older may engage in some forms of light work. And the recent National Plan of Action for the Elimination of the Worst Forms of Child Labour, based on the International Labour Organization (ILO) Convention No. 182, recognises the challenges to completely eradicating child labour; it is designed, instead, to protect children from work that might harm their physical or educational development.

One area of contention is household work, such as cooking, cleaning, running errands, and caring for younger siblings. Prince Ohene-Koranteng, the director of communications at Defense for Children International Ghana, explained that such chores are sometimes acceptable.

“Those things are possible, and they must not be stopped, as long as they don’t prevent the child from accessing quality education,” he said. “But it should end somewhere, because at a certain point the child should be able to take care of his or her school assignments,” he added.

UNICEF’s Allan said that some household tasks can contribute to a child’s socialisation or training, but she specified when even light work infringes on children’s rights.

“In Ghana, children help their families,” she explained. “Where that help is hazardous to the child’s health, or is harmful to the education of the child, then it is termed child labour,” she said, adding that every child has the right to be protected from engaging in work that constitutes a threat to his health, education, or development.

Many children also help their families by working part-time, and attending school on a shift system. They might go school in the mornings and work afternoons, or work certain days and study others. But this too can inhibit their development and be deemed child labour, according to Allan.

“If a child is . . . going to sell and then going on the shift system, the it goes to school tired and sleepy. That is affecting the child’s education, because it is not performing,” she said, adding that they do not have time to do their homework.

She also noted that when a child is given a load to carry on her head, though considered light labour, it could affect their physical growth and pose a threat to development.

Allan’s understanding of the national legislation mirrors that of Ohene-Koranteng. He said that any form of harmful work, whether “light” or “hazardous,” is child labour – and therefore illegal. But, he said, the legislation is rarely implemented.

“Even though the law is there in our books, the implementing agencies should do more to be able to protect the children,” he said.

“If we have to leave this to the parents alone to do, they will say that because their children are helping them to make ends meet, they will continue to put them on the street.”

According to Jacob Achulu, the Ashanti regional director with the Ministry of Employment and Social Welfare, such implementation problems stem from financial insecurity.

“The legal framework is there,” he said. “The problem is the enforcement – and I think it’s because poverty is widespread in most parts of our country.”

Financial insecurity prevents Aku from going to school. She is 10 years old, and attends school when she can, but when her parents cannot afford her school feels she sells hot peppers, locally known as pepe, in Kejetia Market.

“She went to school today, but the teacher sacked them because they are not paying their school fees,” explained a woman in the market.

“They want to go tomorrow, but because of money—school fees—the mother said they will go into service instead,” she translated.

Achulu called for more concrete action on the ground.

“The ILO interventions and NGO interventions are welcome, but there is the need to have sustainable activities that will make sure the families are able to keep their children in school,” he explained.

The Ghana Children’s Rights Protection Foundation, or GCRPF, is an organisation that aims to do this by addressing child labour at its root. Its members provide school supplies and funding to low-income families, and help parents to earn additional income through hands-on projects. The secretary, Osborn Kwasi-Sarpong, noted the importance of supplementing family earnings.

“How must a child go to school tomorrow if he stops selling water today?” he asked. “The basic thing we have to do first is to see to the welfare of the mother, the parent, to be able to find something to do with her hands,” he explained.

And ultimately, said the GCRPF’s director, Reverend Christian Antwi-Boasiako, getting more children out of the streets and into schools will have a positive impact not only on the child, but also on the nation as a whole.

“A child is supposed to have good education, and good health care,” he said, “and then when he or she grows, he would also contribute to the development of the nation.”