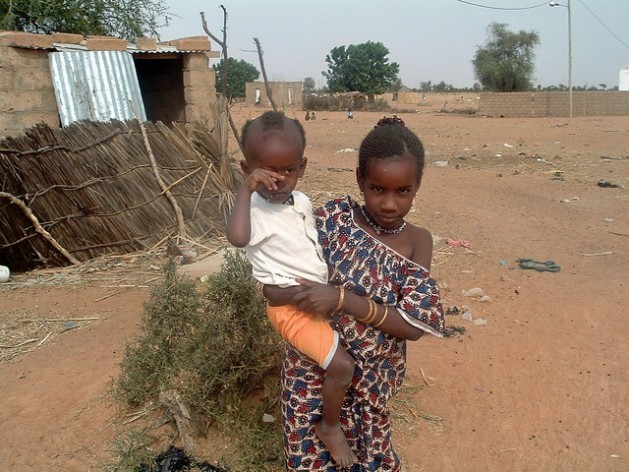 Only 12 percent of women in Senegal use contraceptives, which has led to a “baby boom” in the country. Credit: karah24 /CC-BY-ND-2.0

DAKAR, Jan 21 2013 (IPS) - A 25-year-old mother of five hailing from Senegal’s eastern Tambacounda province believes that contraceptives damage the womb and cause health problems in the long term, such as a rise in blood pressure and chronic headaches.

“This is what I heard some women saying in the bus I boarded to go to town,” the woman, now living in the capital city of Dakar after her tragic divorce, tells IPS.

She was only 16 when she was forced to marry her 35-year-old cousin. When she tried to discuss contraception with her former husband, “he beat me up and swore that he would kill me if I ever mentioned it again. So we kept having babies.”

As a result of misconceptions about children and family planning, religious dogma and a lack of reproductive health services, thousands of women across Senegal share her plight.

Children are a symbol of wealth in this West African country of 12 million people, a perception that has led to a “baby boom”, experts here say.

“This ancient belief implies that more boys mean more manpower (for) a farm, or that you stand a chance of seeing (your son) become a rich man or even the president of the republic or a minister, while many girls bring their parents more money or livestock for dowry when they get married, ” marriage counsellor Fatoumata Sow tells IPS in Dakar.

“The moment (women) get married, they start making children as if a high-speed train has taken off late at a station, and is flying to catch up.

“And though I’m using Senegal as a case study, the trend is almost the same all over West Africa,” according to Sow, the mother of nine children.

She says family planning is taboo in many parts of West Africa, especially in rural communities where illiteracy is rife and awareness about family planning services – let alone access to contraception and birth control – is non-existent.

“Lack of effective family planning policies and (this perception) of children being a symbol of wealth has seriously damaged the social fabric of Senegal,” a doctor at one of the country’s public hospitals, who was afraid to give his real name for fear of persecution by the authorities, tells IPS.

“I always ask every pregnant woman who stands before me for consultation if she has ever used contraceptives, and the response I get every day is no.”

Coll-Seck, who confessed that the country’s current contraceptive prevalence rate is one of the lowest in the world, says her government’s vision is to move the needle from 12 to 27 percent by 2015.

This will mean reaching five percent of users per year. “It is possible,” an optimistic Coll-Seck told the press in Dakar.

In a bid to create awareness and break down the stereotypes surrounding contraception, the government launched a national day of family planning action late last year.

The plan comes not a minute too soon: according to Coll-Seck, one woman out of two has expressed the desire to space births but does not have access to family planning products and services.

The national action day will also be used to sensitise men about the importance of spacing births, because family planning is a matter for the couple, not just for the woman.

The Senegalese government says it has set a target of reaching 350,000 women in the next three years.

In order to effectively reach its goals, the campaign has been divided into three phases, according to Dr Bocar Mamadou Daff, national director for reproductive health and child survival.

First of all, creating awareness through mass communication, which includes sending specific messages to selected targets and embarking on an advocacy campaign to get leaders to support family planning values.

The second phase involves a community-based distribution system to improve access to short-term contraceptives. Private actors will also be involved, Daff says, to help expand the supply of contraceptives.

The third and final phase is to ensure that contraceptives are readily available for those who need them.

According to Sow, better family planning could also help the government tackle two related problems that it has struggled for many years to address: malnutrition and homelessness.

This past December, the United Nations Children’s Fund (UNICEF) said it had distributed life-saving treatment to more than 850,000 severely malnourished children in the Sahel region, who were starving to death in 2012.

Senegal has one of the highest rates of acute malnutrition in the world; in the northern province of Matam the rate is as high as 19 percent, according to the World Food Progamme.

“When there are too many kids to feed, the head of the household must have plenty of (money) to take care of them, otherwise they will either get sick from hunger and die, or move to the streets to beg,” says Sow.

But not everyone is supportive of the new government initiative. Religious leaders like Al-Hajj Ibrahima Dieng (61) believes such practices “are anti-Islamic”.

“Allah is the one who gives (us) children and he’s in charge of providing everything for them, to enable them to grow healthy and strong,” an incensed Dieng, father of 15 children, tells IPS.

“And you want to stop that from happening? I swear by Allah that I will never be part of such nonsense. It’s haram.”

Though such opinions are widespread among the country’s conservative religious majority, not all religious leaders share Dieng’s anti-contraception sentiments.

Cheick Mouhamadou Mbara Segnane, a highly respected leader of the Tidjiane community in Senegal, is extremely concerned about the baby boom.

Some experts like Sow believe change will only come slowly.

“I think as a society, we are not yet ready for such an evolution,” she tells IPS. “Traditions and cultural beliefs have affected our minds so much and brainwashed us so totally that we have become blind. But there is room for hope.”