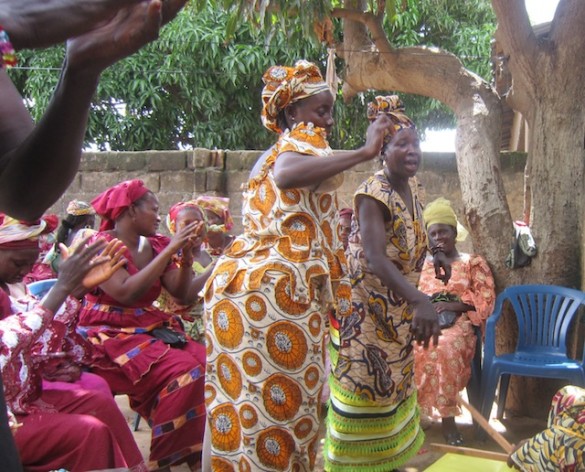 A group of women in rural West Africa participate in a traditional ceremony to celebrate a polygamist marriage. Credit: Fatuma Camara/IPS

DAKAR, Sep 12 2012 (IPS) - Fatou (40), Awa (32) and Aissatou Gaye (24) sit in a meditative mood on the tiled floor outside their matrimonial home in Keur Massar, a township in the Senegalese capital Dakar.

“These are my three wives and soon I’ll take a fourth to comply with Islamic law,” brags Ousmane Gaye (50), a businessman who has commercial interests in this West African nation and also in neighbouring Mali and the Gambia.

“As you can see, they love one another and live in harmony and peace like three sisters,” he says. But peace and harmony have a strange meaning in Ousmane Gaye’s vocabulary.

“Last night, Fatou and Awa beat Aissatou repeatedly and launched a litany of insults at her,” a family source tells IPS on the condition of anonymity.

“They accuse her of bewitching their husband to make him love her too much. In fact, as you came in, he was busy reprimanding them. Honestly speaking, since Ousmane brought in Aissatou three years ago, his home has not known peace and harmony.”

The women are prohibited to speak to strangers, including neighbours, women’s rights activists or marriage counsellors about their matrimonial problems. They also do not have the right to complain unnecessarily as long as they have “everything”, which includes food, clothes and sex.

“This is the way of life in Senegal,” says Adama Kouyate, an internet café owner in the middle-class suburb of Golf Sud. Two years ago, Kouyate “inherited” the wife and six children of his late brother. He has just had a baby with his late brother’s wife, bringing the number of children under his care to 14.

“This has nothing to do with Islam, but it’s our culture. And no woman has the right to oppose this because she will be harshly cursed for the rest of her life,” he says in Wolof, Dakar’s widely-spoken language.

Aminata* a Dakar woman who secretly counsels and advises wives in polygamist marriages, says: “Polygamy is a form of modern slavery, believe me it’s not easy as it sounds. Women involved in this form of marriage have no voice and no channels to complain.”

Rokhaya*, a 23-year-old university graduate who earlier this year was forced to marry a 48-year-old rich man, agrees: “Polygamy is hell and a pack of lies.”

“Look at me, I am young and supposed to be doing things most girls my age are doing. I had dreams and aspirations to own a small company and travel the continent. I’m trapped and feel I’m going crazy because this illiterate rich man won’t let me fulfil my dreams,” she says, sobbing.

Daya* says she wants to further her education but is afraid that her husband will not allow it. She stopped going to school in Grade 7, at the age of 15, when she was given in marriage to her cousin, a Muslim cleric. Now she is 30 and has seven children.

Aminata, a divorcee who was involved in an 18-year polygamist marriage, says that polygamy violates the principle of equality, promotes gender disparity and compromises women’s progress in society. “And it’s getting worse in Senegal,” she says.

“In virtually every sector of life here in Senegal – in issues of inheritance rights, involvement in business, and access to land and education – women still lag behind, despite our constitution asserting equality between men and women.”

According to the Global Gender Gap Index produced by the World Economic Forum since 2006, Senegal ranks 102nd out of 134 countries. The index measures the position of women relative to men in the areas of economic participation and opportunity, educational attainment, political empowerment, and health and survival.

A “2010 USAID-Senegal Gender Assessment” report, published in April 2012, also points to continued gender disparities in many areas in this country.

“It is widely noted that implementation of the various international and national laws on gender equality and women’s rights is weak and that the government lacks an adequate plan to enact its policies,” the USAID report says.

According to the report, 39 percent of girls in Senegal aged 20 to 24 have been married by the age of 18, while the country ranks 27th out of 68 countries surveyed in terms of girls marrying before the age of 18.

Most young men interviewed at the Place de l’Independance in the Dakar city centre say they would opt for polygamy when they are ready for marriage.

Lamine Camara, 22, a student at the Cheik Anta Diop University of Dakar, says he would rather be a polygamist and “officialise all my relationships instead of taking a string of girlfriends and risking diseases such as AIDS.”

“It’s like fashion, you follow the trend. Besides, women outnumber men in Senegal. Polygamy is helping a lot. Almost every man in my area, young or poor, is now a polygamist. So what?”

Slightly more than half of Senegal’s 12.9 million people are women. In the 15 to 64-year age bracket there are 3.6 million women compared to 3.2 million men, according to the country’s demographic profile for 2012.

“The practice, which in the past was widespread in rural areas, has reached urban areas with alarming proportions. And abuse is on the increase, mostly in Dakar, where polygamists are becoming younger and younger,” says Fanta Niang, a social worker and gender activist from Senegal’s third-largest city of Thies.

“There are no official statistics on polygamist marriages in Senegal that I know of. They used to say one out of four marriages in urban areas and one out of three in rural areas was polygamist, but these figures are flawed to downplay the gravity of the matter,” Niang says.

She adds that sadly most wives in polygamist marriages are illiterate and unaware of women’s rights and the right to equality.

Senegal’s gender parity law of May 2010, enacted under the Abdoulaye Wade government amid criticism from traditionalists and Muslim hardliners, has paved the way for 64 women members of parliament of a total of 150 under the newly elected government of Macky Sall. The law requires political parties to ensure that half their candidates in local and national elections are women.

“There has been no progress regarding women’s emancipation in Senegal, and polygamy continues to play a big role in that respect,” Niang says. “Women’s empowerment should start on the ground, not at the top. These 64 MPs are just the tip of the iceberg. What about the 61 percent who cannot read and write.

“We interact with these women on a daily basis, and we see things you don’t even want to hear. That’s why I said there is no progress.”

Some argue that polygamy constitutes a threat to Senegal’s constitutional principles of gender equality and the National Strategy for Gender Equality and Equity which was developed in 2005. Moussa Kalombo, a gender analyst and religious expert, tells IPS that polygamy violates the constitutional principles of gender equality in every country.