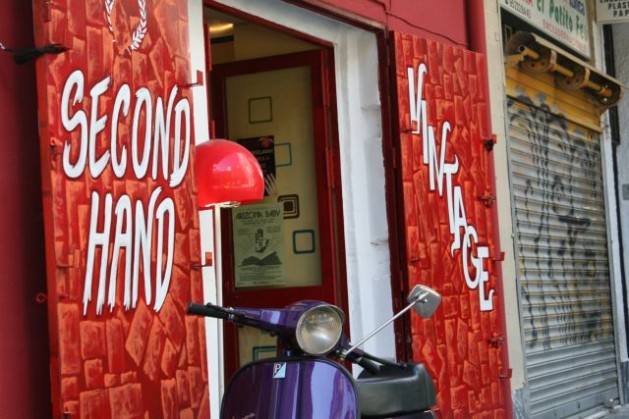 MÁLAGA, Spain, Feb 13 2013 (IPS) - The Spanish public is well aware of the widespread exploitation of workers in the globalised garment industry. But low prices, shrinking buying power and the lure of brand names act as strong disincentives to responsible clothes shopping.

“We know about the kinds of things that go on, but what can you do? In times of crisis like these, you can’t afford to buy much, and what you do buy has to be cheap,” says Virginia as she leaves a shop in a large shopping mall in the southern Spanish city of Málaga. “Those clothes are from Bangladesh, aren’t they?” she asks, pointing to a nearby window display.

Eva Kreisler, the coordinator of the Clean Clothes Campaign (CCC) in Spain, finds it “repugnant” that the women who manufacture clothing in countries like Bangladesh for big companies “subsidise low production costs for the companies and the low prices paid by consumers” by working for meagre salaries and in highly precarious conditions.

The other day I was in a fair trade store and all I could do was look, because everything was so expensive...

Although Kreisler believes that there is greater awareness among the general public of the abuse and exploitation suffered by garment industry workers, “there is still a great deal that needs to be done.”

“The problem is that labour exploitation is structural,” and therefore requires the adoption of “structural measures” by big companies, she told IPS.

The CCC does not promote boycotts of specific brands or store chains. Instead, it calls on consumers to question the employment practices of garment manufacturers and to participate in campaigns to demand better pay for garment workers and compliance with international standards established by the International Labour Organisation (ILO).

The CCC is an alliance of NGOs, trade unions and consumer advocacy groups in 14 European countries, which works in conjunction with a partner network of organisations and unions in garment-producing countries in Asia, Africa, Central America and Eastern Europe and cooperates extensively with similar labour rights campaigns in the United States, Canada and Australia.

Lourdes has worked for 11 years as a sales clerk at a shop run by the Spanish group Inditex, one of the world’s largest fashion retailers and owner of a number of different store chains including Zara, Pull & Bear, Massimo Dutti, Bershka and Stradivarius.

But Lourdes does not know what a code of conduct is, and has no idea if the company has adopted one or complies with it. She says that she has never been asked by a customer about where the clothes come from, and admits that she herself buys clothes without reading the labels.

When questioned by IPS about the working conditions of the people who manufacture the clothes, like a dress made in Romania and a tank top made in Turkey hanging in a nearby display, she replied, “I don’t know anything about that. The workers here are happy with the company.”

In the last three months, fires have broken out in factories in Bangladesh that manufacture clothing for Inditex, Gap, H&M and Levi’s, among other brands. Hundreds of women factory workers were killed in the fires.

In the latest, on Jan. 26, seven women died, four of them only 17 years old, reported Kreisler, who is pushing for companies with factories in Bangladesh to adopt a safety programme proposed by local and international unions to prevent tragedies like these. Two days after the fire, Inditex announced that it was cutting ties with suppliers in this South Asian country.

“Workers are dying to produce the clothes we wear,” she said.

Purchasing “clean” clothes that are manufactured without these injustices can cost a bit more, however, and buying power in Spain is currently at record low levels.

“The other day I was in a fair trade store and all I could do was look, because everything was so expensive,” Virginia the shopper tells IPS while standing in front of a shop window in the mall announcing clearance discounts of 70 percent.

María, a salesperson in a cosmetics store, said she used to be more selective about where the clothes she purchased were made. “But not anymore.” And for one simple reason: she has less money to spend.

Mercedes walks between bins of clothing items that are all priced at just three euros. She says she reads the labels on clothes, knows about the cases of exploitation in the garment industry from the media, and wonders to herself, “How can they possibly charge such low prices?”

The power of large clothing chains and big name brands to demand low production costs has repercussions on the garment workers in supplier countries, explained Kreisler.

This is why she calls for a “change in mentality” when it comes to clothes shopping, which is quite often “compulsive and unnecessary” and overly influenced by fashion trends.

But the economic crisis in Spain has had other impacts on shopping behaviour. “It has made people more interested in second-hand clothes,” said Pepe Morales, a journalist who has also been managing a used clothing store in Málaga for the last year and a half.

Second-hand clothes shopping is not as widespread and well-established in Spain as in the United Kingdom and the Nordic countries, “but this is a good time for things to change,” said Laura Rubio, coordinator of the Spanish Association of Social and Solidarity Economy Recyclers.

The association is an alliance of non-profit groups that provide environmentally friendly services, like the reuse and recycling of used clothes, while also offering job training and employment opportunities for disadvantaged sectors of the population.

“We try to increase the useful life of clothing by promoting reuse,” through a chain of second-hand stores, Rubio told IPS.

In Málaga, the Cudeca Foundation operates a dozen second-hand shops stocked with donated clothes and uses the profits to help finance a hospice for cancer patients.

The shops are run by a network of more than 400 volunteers. UK native Katie O’Neill, who is the coordinator of the shops, stressed the importance of “giving clothes a second life”.

Clothes should not be thrown in the garbage, because this harms the environment, she said. Instead, they should be placed in containers designated for textile recycling, she told IPS, while nearby a man hands a volunteer a jacket that is still “in perfect condition”.

According to business owners consulted by IPS, the crisis has also given a welcome boost to services such as clothing alterations and shoe repairs, which are in growing demand as people seek to make their clothes and footwear last longer.

*This story was originally published by Latin American newspapers that are part of the Tierramérica network. Tierramérica is a specialised news service produced by IPS with the backing of the World Bank.