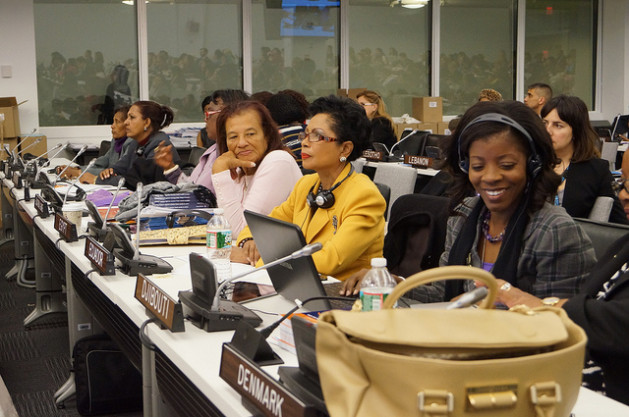 U.N. delegates listen to a high-level heads of agencies panel at the 57th Commission on the Status of Women (CSW). Credit: Lusha Chen/IPS

UNITED NATIONS, Mar 6 2013 (IPS) - U.N. agency heads gathered Tuesday to reassert their unified commitment to ending the epidemic of violence against women and girls, and bringing justice and healing to survivors.

Grim statistics underscore the urgency of this issue: 70 percent of women worldwide report experiencing physical and/or sexual violence, 50 percent of reported sexual assaults are committed against girls under 16 years of age, and 603 million women live in countries where domestic violence has not been criminalised.

Secretary-General Ban Ki-Moon articulated another fact: “Too many women and girls face intimidation and physical and sexual abuse often from those who should care for and respect them most – fathers, husbands, brothers, teachers, colleagues, and supervisors.”

Tuesday’s forum transpired as a part of the 57th Commission on the Status of Women (CSW), whose primary theme is the elimination of violence against women and girls.

It opened with remarks from the secretary-general and continued with a panel of high-level U.N. agency representatives, including Michelle Bachelet, executive director of U.N. Women, and Irina Bokova, director-general of the U.N. Educational, Scientific, and Cultural Organisation (UNESCO).

Bachelet stressed the importance of the diverse contributions of U.N. agencies to the efforts of the CSW.

“Whether we’re talking about UNESCO through education, UNDP (U.N. Development Programme) through government cooperation, UNFPA (U.N. Population Fund) through the promotion of sexual and reproductive health and rights, or UNICEF (U.N. Children’s Fund) through protecting the rights of children, this work is making a difference on the ground,” she said.

UN Heads of Agencies Forum on Violence Against Women and Girls from IPS Inter Press Service on Vimeo.

Perhaps the strongest message of this forum was its unified and indisputable affirmation of violence against women and girls as a priority on the international human rights agenda.

The long struggle for recognition of violence against women as a human rights issue first achieved serious global attention at the 1993 World Conference on Human Rights in Vienna, quickly followed by the General Assembly Declaration on the Elimination of Violence against Women.

Commenting on the development of the issue at the U.N., Bokova told IPS that today, “there is a lot more awareness, commitment, and concrete action… But of course we are not there at all – it’s just the beginning.”

UNICEF Deputy Executive Director Geeta Rao Gupta added, “I can tell you that over this past decade, the amount of attention that this issue has received internationally would not have happened if the U.N. had not taken a leadership position.”

“I think the major difference is that it has become a public issue. (Violence against women) is not tolerated in the way it was before,” Rebeca Grynspan, associate sdministrator of UNDP, told IPS.

“Having acknowledged that, I think that we have not had the accelerated progress that we expected,” she said. “Many times we are pedaling to stay in the same place and not go backward. That’s why I really welcome the fact that this issue has come again to the table of the CSW.”

A recent milestone was the 2010 establishment of U.N. Women, which last year provided capacity-building for stronger legislation and provision of services to survivors of violence in 57 countries.

U.N. Women manages the secretary-general’s campaign, United to End Violence Against Women, and works with U.N. Habitat and UNICEF on the Global Safe Cities Initiative, striving to make urban spaces violence-free for women and girls.

Speaking on behalf of UNESCO, Bokova stated, “Raising awareness and changing the environment through education is crucial. We have to go deep to the root of the violence,” explaining the need to instill within youth the idea that violence is not a “normal” part of life.

UNESCO has created international guidelines on sexuality education, HIV education, gender equality in education, and guidelines for teachers on stopping violence in schools.

Research shows that violence is a major threat to girls’ education, causing poor attendance and forcing many to drop out of school – another reason why the issue is high among UNESCO’s priorities.

Grynspan argued that violence against women is also a dangerous obstacle to global productivity, currently preventing seven in 10 women from achieving their greatest potential contribution to society and the economy by making them more likely to be absent from or quit school and work; violence also costs society in terms of health and legal services for victims, she explained.

Grynspan cited the 2010-2011 Human Development Report, which showed 49 percent loss in human development due to gender inequality. “There is one thing that will bring productivity up and cost down,” she said, “and that is ending violence against women.”

Deputy Executive Director Anne-Birgitte Albrectsen of UNFPA and Regional Director of UNAIDS Sheila Tlou reiterated the extremely detrimental effects of violence against women on the battle against AIDS, which has come too far to be stopped now.

Across the panel, representatives recognised the wide range of causes and perpetuators of the violence against women.

They made references to cultural practices of early, forced marriages of girls and female genital mutilation; they pointed to cultural norms that shame women as victims, discourage seeking help, and normalise violence in domestic, educational, and work settings; they discussed the vulnerability of women in conflict and post-conflict societies, where rape often becomes a weapon.

Recognising the vast majority of women both on the panel and in the audience, the representatives also called for greater engagement of men and boys and male ownership of the issues.

As Grynspan noted, with her fellow panelists nodding in agreement, “We are still, by and large, talking to ourselves.”