One of the numerous initiatives to promote fuel-efficient, low-carbon wood-fired cookstoves aims to be the second in the world financed with carbon credits. 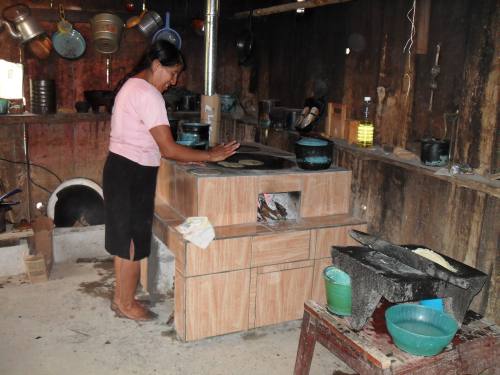 MEXICO CITY, Apr 25 2013 (IPS) - Environmental organisations in Mexico are hoping to finance the promotion of fuel-efficient wood-fired cookstoves, which reduce harmful greenhouse gas emissions, through the sale of carbon credits on the voluntary market.

Two non-governmental organisations are working in the municipality of Felipe Carrillo Puerto, in the southern Mexican state of Quintana Roo, to develop and promote these improved cookstoves, which would also reduce wood consumption as well as the incidence of respiratory problems caused by the smoke from traditional stoves.

“The majority of rural families in the region cook with firewood. We began with a series of workshops to find out what kind of stoves there are in the country,” said Dulce Magaña, the ecotourism and ecotechnology coordinator at U’yo’olché (“tree shoot” in the local Mayan language), which is leading up the initiative in conjunction with the Mexican Fund for the Conservation of Nature (FMCN).

U’yo’olché, founded in 1999, works in the areas of community forest management, ecotourism and biodiversity monitoring in Quintana Roo and the neighbouring states of Yucatán and Campeche.

The cookstove initiative started off in 2006 with the distribution of Patsari stoves, one of the most commonly used models of efficient cookstoves in Mexico. They are made of clay and manufactured with federal and state subsidies.

But clay is scarce in the region, which led the organisation to adapt these stoves and develop a new model called Túumben K’óoben (“new stove”), made with local materials such as white earth, nopal (prickly pear) cactus juice, lime and corn husks.

In terms of design, the stove is basically a brick and cement structure with a combustion chamber where the firewood is placed, two or three metal burners, and a pipe through which the smoke is released.

More than 2,000 improved cookstoves have now been distributed, half of them based on this new model. A solar power cooker is included with each one.

Thirteen percent of Mexico’s 117 million inhabitants cook with firewood, which is used at an estimated rate of 2.5 kilograms daily per person.

And every year, over 4,000 deaths occur due to smoke exposure from traditional cookstoves or open fires, according to the Global Alliance for Clean Cookstoves, an association of governments, universities, the private sector and non-government organisations.

“The distribution of solar cookers and energy-saving cookstoves and training in their use has made it possible to reduce the consumption of firewood in the country’s rural communities,” Lorenzo de Rosenzweig, the general director of the FMCN, told Tierramérica*.

In addition to reduced wood consumption and the elimination of hazardous household smoke, the improved stoves decrease the risk of accidents, cut down on household expenses, and give women more free time for other activities, such as education or work outside the home, thus strengthening women’s rights while improving quality of life.

In addition, a traditional wood-burning stove releases 7.14 tons of carbon dioxide (CO2) annually, while the use of a solar cooker and improved stove can reduce those emissions by up to four tons, according to the FMCN.

“Cookstove projects can be successful. Some have achieved stable development. The crucial component is the model of the stove, which must be adapted to the needs of the users, the quality of the materials, and follow-up of the adoption of the technology,” said Iván Hernández, the regional manager for the Americas of The Gold Standard.

This Geneva-based organisation certifies renewable energy, energy efficiency, waste management and forest carbon offset projects. In Latin America it has certified 63 initiatives so far. Nine percent of these have issued credits equivalent to between 150,000 and 200,000 tons of CO2, Hernández told Tierramérica. Only four of those projects are in Mexico.

Carbon credits are issued for activities that demonstrate a concrete and measurable reduction in CO2 emissions, and are traded on carbon markets. The buyers, while financing the clean energy project that generated the credits, can use them to demonstrate that they have contributed to the global reduction of greenhouse gas emissions.

Utsil Naj (“clean house for everyone”), a programme that helps clean technology initiatives in Latin America to enter the carbon market, accepts projects aimed at the promotion of energy-efficient stoves, solar cookers and water heaters, photovoltaic panels and greenhouses, and operates in Guatemala, El Salvador, Honduras and Peru, as well as Mexico.

For Mexican initiatives, the voluntary carbon markets in the United States, Brazil, Chile, Australia or Japan could be better alternatives than the mandatory carbon markets established under the Clean Development Mechanism (CDM) of the Kyoto Protocol.

In force since 2005 and extended until 2020, the Kyoto Protocol allows industrialised nations that are obliged to reduce their greenhouse gas emissions to invest in emission-reduction projects in developing countries, as a way of “offsetting” the emissions they have not managed to cut within their own borders.

As of this year, Mexico can only sell carbon credits in Europe from projects registered under the CDM up until 2012, which makes voluntary carbon reduction schemes an attractive option.

“Through the carbon credits we could earn income for maintenance or for activities with women, such as providing access to other technologies, as well as follow-up and monitoring of the cookstoves,” Magaña told Tierramérica.

U’yo’olché is preparing to conduct an assessment of the adoption of the improved cookstoves among their users. Each stove costs roughly 162 dollars. Through an interest-free microcredit loan, purchasers can pay for them in weekly instalments of eight dollars. They can also opt to pay part of the cost of the stove, with the remainder financed by an organisation, said Magaña.

The project would be the world’s second improved cookstove initiative certified by The Gold Standard to sell carbon credits on the international market. The first is the Peruvian initiative Qori Q’oncha, which also entered the market with the assistance of Utsil Naj and generates around 100,000 tons of carbon credits.

“The resources will be reinvested to expand the coverage of the project and to train community leaders. One it is underway and producing results, the initiative will be replicated with partners in other regions of Mexico,” said de Rosenzweig.

Hernández noted that “many regions and countries have undertaken individual or bilateral initiatives for the potential trade of emissions reductions. Their combination with voluntary markets will be key for the development of these new mechanisms.”