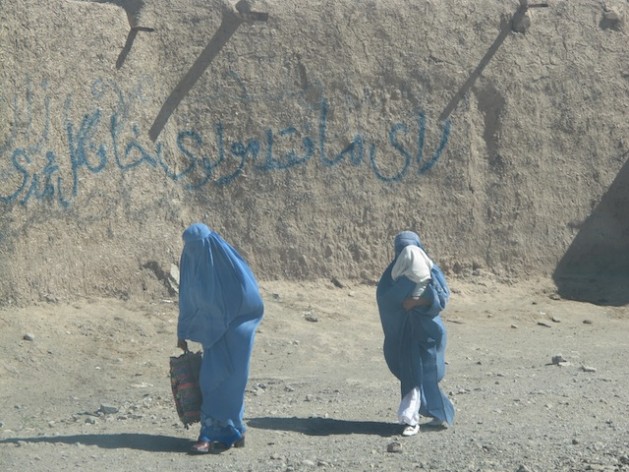 Burqas fail to shield many Afghan women from daily harassment, both in the street and at the workplace. Credit: Shelly Kittleson/IPS

KABUL, May 17 2013 (IPS) - While global attention is fixed on the scheduled pullout of U.S. and NATO troops from Afghanistan in 2014, women here have a much more immediate concern: how will they survive another day at work?

Having a job is now considered a routine aspect in the lives of many women around the world, but here, female employees are forced to navigate entrenched sexist and patriarchal attitudes, dodge sexual advances, and live with memories of harassment, abuse and even rape.

Last month, the international watchdog Human Rights Watch drew attention to the plight of Afghan policewomen who were being raped and harassed on the job due largely to a lack of gender-segregated bathroom facilities.

A flurry of press coverage ensued, drawing the ire of the Interior Ministry, which grudgingly promised to take action but has yet to implement any concrete safety measures or bring the perpetrators to justice.

In the face of apparent indifference on the part of many officials to a growing trend of sexual abuse in the workplace, one branch of the government has stepped up, drafting a set of anti-harassment guidelines that, if enforced, all employees will be required to abide by.

Spearheaded by 26-year-old Matin Bek, deputy director of Afghanistan’s Independent Directorate for Local Governance (IDLG) and the youngest deputy minister in the country, the draft regulations acknowledge that workplace safety is a fundamental right and provide women with mechanisms to seek redress should this right be violated.

The son of a mujahedeen leader credited with fighting to keep girls’ schools open in his northern Takhar province during years of civil strife from the late 1970s until the end of the Taliban era in 2001, Bek is well aware of the challenges that lie ahead.

In a country where most women languishing in prison are there for committing so-called “moral crimes” – such as having been raped, leaving abusive marriages or choosing their own partners  – he recognises that attempts to improve workplace safety may be perceived by some as “quixotic.”

But, as Bek tells IPS, he grew up in an “entirely different environment” to the urban patriarchal landscape. Since his father’s untimely death in a bomb blast in late 2011 he has been helping to dismantle the patronage networks that have traditionally been responsible for appointing district governors.

The IDLG now promotes a professional, merit-based body of civil servants accountable to the constitution.

This year, his ministry chose the date of Mar. 13, in honour of International Women’s Day on Mar. 8, to institute the anti-harassment guidelines as a national commitment to stop “treating women as commodities,” Bek said.

The guidelines define harassment as either verbal or physical intimidation, including unnecessary physical contact or drawing attention to an employee’s “sex appeal’’. Employers are obliged to follow up on complaints made via email or telephone and take disciplinary action against the perpetrators.

The threat of rape, harassment and the “loss of honour” are thought to play a bigger role in keeping Afghan women at home than religious motivations.

Women’s rights are not won overnight in Afghanistan, and implementation of the guidelines will certainly take time. But the conversation has been opened and that is a crucial first step, according to Bek.

Similar conversations, started after the Taliban’s fall from power in 2001, have seen more concrete victories, such as the enactment in 2009 of the Elimination of Violence Against Women law. While convictions remain exceedingly rare and enforcement erratic, the law has broken much of the stigma around reporting issues like domestic violence.

Former Human Rights Commissioner Nader Nadery told IPS that a greater willingness to report similar incidents, if not to the authorities then at least to human rights organisations, was unquestionably a step in the right direction.

“Taboos like rape and sexual violence were not reported at all in the past,” he noted.

An even more disturbing trend, advocates say, is that women often bear these violations in silence, facing harsh repercussions if they complain.

Sexual harassment is pervasive in the country’s larger cities, like the capital Kabul, the northern city of Mazar-e Sharif and the western city of Herat. One NGO worker who did not wish to be named told IPS the harassment she faced in the capital was so extreme that she left the country in search of work elsewhere.

“I couldn’t take it anymore,” she said.

A large part of the female workforce is employed in the government sector, but even here women are far outnumbered by their male counterparts: last year the Reuters news service reported that out of a total of 363,000 state employees, only 74,000 were women.

According to a report by the World Bank, the labour participation rate of women over the age of 15 years was 14.4 percent in 2012, compared to 80 percent for men.

Increasingly, even this small portion of women who are able to secure jobs are being forced by their male relatives to stay home, or are doing so out of fear of being attacked on the job.

This trend, according to Bek, is a dangerous one, as a result of which entire communities suffer significant economic losses: in a country where per capita GDP is about 1,000 dollars, a woman’s salary can mean the difference between healthy and malnourished children, or between sending youth to school versus forcing them into child employment.

Thus the new anti-harassment regulations, implemented in hundreds of local government offices under the IDLG’s beat, aim not only to raise respect for individual rights within Afghan society but also to foster economic growth, Bek said.

Various studies show that women’s participation in the workforce and in leadership positions play a vital role in economic and overall development.

One such report claims that if female employment rates were to match male rates, Japan could see a rise in GDP of nine percent, the United Arab Emirates (UAE) of 12 percent and Egypt of 34 percent.

If women were allowed to concentrate on their jobs instead of looking for ways to avoid harassment, molestation and violence, their potential to the Afghan economy could be “vast,” Bek noted, adding that women’s participation in economic activities could also contribute to overall stability in the region, as fears of “chaos” and even civil war proliferate ahead of the 2014 departure of Western troops.

Despite ample evidence on the need for such guidelines, enforcing them will not be easy. Reports of misconduct by public officials often meet with accusations that such claims by women or their advocates “insult the honour’’ of the alleged perpetrators or the public institutions to which they belong.

For example, the Apr. 25 HRW report on the need for safe bathroom facilities for Afghan policewomen provoked the wrath of the Interior Ministry, which demanded the rights group “apologise” for its findings.

The government of President Hamid Karzai had set itself the goal of recruiting 5,000 women into the Afghan National Police (ANP) before 2014 to boost the miserable one percent female participation rate that currently exists.

Barr says this move is crucial, since most Afghan women are too frightened to report rape to male officers and cannot be searched by them. But, she said, the Interior Ministry’s attitude towards reports of rape and harassment could “harm efforts to recruit female police.”