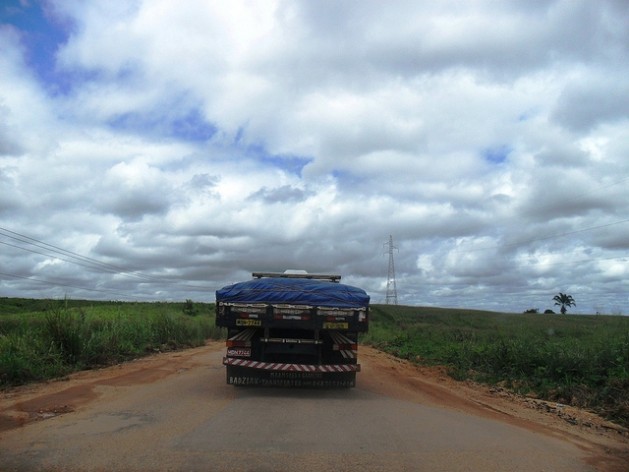 Road in Pará's Amazonian region shows only pasture where once there was rainforest. Credit: Fabíola Ortiz/IPS

MARABÁ, Brazil, May 2 2013 (IPS) - A fresh outbreak of violence between large landowners and landless peasants is looming in the Amazonian state of Pará, in northern Brazil.

The large estate of Itacaiúnas, in the southeast of Pará, in the municipality of Marabá, 684 kilometres from the state capital, Belém, is owned by Agro Santa Bárbara (AGRO-SB), a company that possesses at least 600,000 hectares of land in the state of Pará.

Since 2002 the Federation of Agricultural Workers of Pará (FETAGRI) has demanded that the property be confiscated and the land redistributed under Brazil’s land reform laws. More than 300 families are living on the land, in an encampment.

In late April, the landless rural workers announced that they would carry out “definitive occupation” of the estate and on Monday Apr. 29 they started dividing it into lots in order to “build the settlement themselves,” according to a FETAGRI communiqué.

AGRO-SB regards the landless farmers as criminals and says it has reported their actions to the military police, in order to keep the peace and avoid conflict.

“This group of land invaders is planning to divide the property into lots. Its goal is to expand the illegal occupation. This is a new criminal action by the invaders, who have the estate under their control and are blocking access by other people,” AGRO-SB said in a communiqué.

There is a real possibility of imminent violent conflict, because heavily armed groups hired by the estate owners have been reported in the area.

José Batista, a lawyer for the Catholic Church Pastoral Land Commission (CPT) who is following developments closely, told IPS the conflict in Itacaiúnas is “quite serious.”

“These families have been waiting to be settled (with legal distribution of land under the land reform process) for a long time. The company has hired armed guards and we have received information that it has poisoned the pastures in order to force the families to leave. This has added to the tension, and now (the peasants) have decided to occupy a larger area,” he said.

Although the police were called in to prevent a direct clash between the rural workers and the armed guards, sometimes the police presence itself generates conflict.

According to Batista, the government decided to expropriate the estate in 2010, but AGRO-SB obtained a court injunction suspending the issuing of property titles to the settlers by the National Institute for Colonisation and Agrarian Reform (INCRA).

“The encamped families will not give way, but they want a peaceful solution to the problem,” Batista said.

Meanwhile, there is a dispute over the value of the indemnity that the government should pay AGRO-SB for expropriating the estate. The company had negotiated with INCRA to accept the equivalent of 11.5 million dollars.

But the cost of the environmental damage caused by the company, which deforested the jungle area of the estate, estimated at three million dollars, was deducted from that sum. The company then presented a report valuing the property at 21 million dollars.
According to Batista, the estate has an area of 10,600 hectares. There are reports that over 60 percent of the land was publicly owned, and that the estate is unproductive.

A large proportion of the conflicts and deaths caused by land disputes have occurred in the Amazonian region, where the agricultural frontier is expanding and infrastructure and mining projects have intruded.

This is one of the main causes of violence in the south and southeast of Pará, the second largest state in the country and the national leader for human rights violations and murders over land conflicts.

According to the CPT, between 1964 and 2010 there were 914 murders of rural workers, trade unionists, lawyers and members of religious orders in Pará, of which 654 were perpetrated in the south and southeast of the state.

The figures are not precise, because many cases do not even make it to the light of day, according to the report “Violação de direitos humanos sul e sudeste do Pará” (Human Rights Violations in the South and Southeast of Pará) published by the CPT, FETAGRI, and other organisations in March 2013.

“Action by the justice system is also a distance of light-years away from the crimes committed and the punishment of offenders,” Batista said.

Of the 914 murders in Pará mentioned above, only 18 have come to trial.

Between 1980 and 2003, 35 massacres were committed in the south and southeast of Pará, with a death toll of 212 rural workers. Some of the trials in the courts have dragged on for more than 25 years.

Death threats are common currency. The report says that between 2000 and 2011, 165 people in the country received death threats, including 71 in Pará. Of those threatened, 42 have been murdered, 18 of them in Pará state.

“Land reform is a Utopia. Violence in Pará is increasing, impunity hinders any advance in the investigation of cases, and the targets of the murders are leaders of social organisations,” Adebral Lima Júnior, the representative in Pará of the human rights commission of the Ordem dos Advogados do Brasil, the Brazilian bar association, told IPS.

According to Marianne Andersson, a member of the board of trustees of the Right Livelihood Award Foundation who was part of a delegation that visited the area in April in solidarity with Brazilian activists, “internationalising” the issue is a way of pressuring for its solution.

The Foundation, which awards what is known as the “Alternative Nobel Prize,” will encourage its global network to write letters of complaint to Brazilian embassies the world over. “We are calling on the Brazilian government to urgently implement land reform for the sake of justice,” Andersson said.