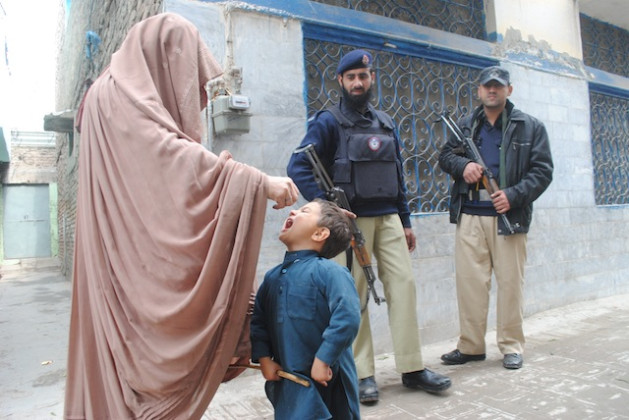 PESHAWAR, Pakistan , Jul 11 2013 (IPS) - Four-year-old Muhammad Jihad is handicapped, and his parents know who to blame: the Taliban.

Jihad’s father, Muhammad Rishad, says the boy tested positive for polio on May 6 at the National Institute of Health in Islamabad.

The family had travelled from their home in North Waziristan, a mountainous region that comprises part of Pakistan’s Federally Administered Tribal Areas (FATA), to ensure their son had the best possible care, only to be told that the virus had spread too far, and little Muhammad would likely never walk again.

"The Taliban are enemies of children. They are against education and vaccination, both of which are necessary for a child’s development.” -- Noor Gul, a schoolteacher in northern Pakistan
A distraught Rishad told IPS, “The Taliban militants are responsible for my son’s (paralysis) – they placed a ban on the oral polio vaccine, so my son could never get immunised.”

Rishad is a daily wage-labourer, who had few dreams beyond securing a decent life for his only son. Now, he says, the Taliban have robbed him of his little hope for the future.

“When he grows up, my son will condemn the militants,” Rishad added, even though such thoughts bring him little solace.

Experts here say children are the future of this troubled country of 170 million, and should be protected at all costs.

Sadly, such advice has fallen on deaf ears in the militancy-ridden northern regions, where the Taliban have imposed a complete ban on all vaccines against preventable childhood diseases, including polio – sometimes referred to simply as “infantile paralysis” due to its crippling effects on a child’s nervous system – measles, diphtheria, hepatitis, meningitis, pertussis, influenza and pneumonia.

Children in all seven agencies of FATA have been the worst affected by the ban on the oral polio vaccination (OPV), which the Taliban have described as a ploy by the United States to render the Muslim population infertile. Over 160,000 children in North Waziristan and 157,000 children in South Waziristan are now at risk of contracting deadly ailments.

The Taliban have used violence and terror to implement the ban – since December 2012 at least 20 volunteer health workers and policemen have been assassinated for daring to defy the militants’ orders by participating in immunisation drives in the Khyber Pakhtunkhwa (KP) and Sindh provinces.

Two years ago, polio had been wiped out in all but three countries worldwide: Afghanistan, Nigeria and Pakistan. In Pakistan, the recent recurrence of the disease marks several steps back from successful attempts at eradication: from just 28 cases in 2005, the country saw a rapid increase of up to 117 cases in 2008, and 198 cases in 2011.

Eighteen cases have already been reported in 2013, and experts fear that number could rise very quickly.

Dr. Farman Ali, based at the Agency Headquarters Hospital in the town of Miranshah in North Waziristan, told IPS “an outbreak of polio” is never far off when large numbers of children remain unimmunised while the virus is in circulation.

According to the Health Department, medical workers have recorded over 50,000 incidents of families refusing the vaccination in FATA and the KP.

“The Taliban have strictly warned us to stay away from vaccination. They have broken the iceboxes of health workers and threatened to kill them if they (continue their work),” Ali said.

Taliban Spokesman Ihsanullah Ihsan told IPS last year that his “leadership decided to ban the vaccine because it was an excuse for the U.S. to send in its spies and expose Taliban leaders to drone strikes…we will allow vaccination when the U.S. stops its drone strikes.”

But rather than the U.S. government, it is poor families who are paying the price for this ban.

Gul Daraz, a resident of North Waziristan Agency, has a three-year-old son who had already received his first dose of the OPV when the ban was announced. Because he was never allowed to complete the full course of three doses, as required by the World Health Organisation, he is now handicapped.

“Every time my wife sees our crippled son, it reduces her to tears,” Daraz, a poor shopkeeper, told IPS.

Sadly they are not alone in their plight. According to FATA Health Director Dr. Fawad Khan, “We have only been able to vaccinate 400,000 of the 900,000 target children under five years in FATA.”

He told IPS 58 cases were reported across the country last year, including 27 in KP and 20 in FATA, of which 12 of the victims had been prevented from receiving the OPV.

Zareen Taja, a housewife in FATA’s Bajaur Agency, told IPS over the phone, “My son is very beautiful, but he will not be able to walk like normal people. I have no one to blame but the Taliban.”

At this rate, she added, Pakistan will never achieve its goal of eradicating this preventable disease that has been stamped out in all but two other countries in the world.

Noor Gul, a schoolteacher in the Frontier Region Bannu, whose son is one of the two affected children in the province, labeled the Taliban “enemies of children”.

“They are against education and vaccination, both of which are necessary for a child’s development.”

An international conference of Islamic scholars held on Jun. 6 in the capital, Islamabad, condemned Taliban militants for killing Pakistani polio workers, and held them responsible for the resurgence of the disease.

Thirty-four scholars from Pakistan, Yemen, Egypt and Saudi Arabia issued a decree saying that those impeding vaccination efforts were committing a crime, for which God would hold them accountable.

Such interventions by clerics are crucial to correcting the misconception that OPV is “anti-Islamic”. Dr. Jan Baz Afridi, head of the KP immunisation programme, told IPS his office is working with religious scholars and volunteer health workers to continue vaccination drives.

“We are under tremendous pressure to immunise all 5.2 million children in the KP in order to effectively wipe out the disease,” he added.