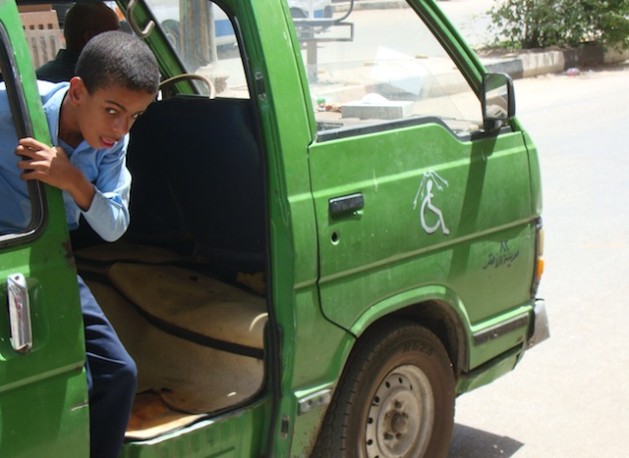 In Egypt, there are few resources for children with disabilities. Credit: Cam McGrath/IPS.

“They are the ones with the disability,” she says. “They have eyes, but cannot see past his blindness. He is able to do far more than most people think.”

Her son Mahmoud likes music, excels in languages, and with the aid of special software, can surf the Internet. He hopes to be a journalist one day.

“A lot of parents feel shame. So they just hide their special needs children and never let them go out of the house.” -- Hanaa Helmy, founder and coordinator of NGO, MOVE Middle East

Sociologists say children with special needs or disabilities in Egypt face formidable barriers that prevent them from participating in society and exercising personal agency. The barriers are a result of ossified institutional structures and deeply-entrenched stereotypes that marginalise those who are physically or mentally different from perceived norms.

Based on a 2006 census, government agencies recognise nearly a million Egyptians – about one in 80 – as having some form of disability. Civil society organisations argue that the actual figure may be closer to eight million, of which nearly half are minors.

“It’s hard to know the real number because many families are usually reluctant to discuss their children’s disabilities,” Helmy tells IPS. “They don’t tell their neighbours, and they certainly don’t tell strangers who show up at their door with surveys.”

The stigma of having a physically or mentally disabled child puts societal pressure on Egyptian families. Parents often worry about the impact the child’s disability will have on their siblings, fearing for example that prospective grooms will turn away when they learn that a girl has a brother who is handicapped.

Making matters worse, traditional Egyptian lore ascribes a child’s physical or mental disabilities to the curse of “jinn” (malevolent spirits). Many Egyptians believe that “jinn” inflict the disabilities on children to punish their parents for moral transgressions.

“A lot of parents feel shame,” says Helmy. “So they just hide their special needs children and never let them go out of the house.”

Disabilities also carry a heavy financial burden in a country where a quarter of the population lives below the United Nations-recognised poverty line of two dollars a day. Few families can afford the medical and physical therapies that could enrich the lives of children with disabilities. Fewer still can afford a basic education.

“Most of these children cannot go to regular schools,” says Helmy. “The schools here won’t accept children with physical or mental disabilities, and are not equipped to handle them.”

She says that most public schools, and all private institutions, require the parents and child sit for an admissions interview. Even a minor disability such as hearing disorder or a crippled leg is likely to disqualify the child.

One alternative is to send the child to the handful of “tarbiya fikriya” (conceptual schools), special schools set up to handle children with learning disabilities. But even these state-run institutions have a lot of conditions that exclude many disabled children, or make their admission prohibitively expensive, says Helmy.

“They often insist that the family provides a ‘shadow teacher’ for the child, but only rich families can afford this,” she says.

Sometimes just getting to school can be a challenge, says 22-year-old Eman Ibrahim, whose younger brother has Down Syndrome. She speaks of some of the difficulties in taking her brother to classes at a “tarbiya fikriya” in the southern Egyptian city Aswan, 15 kilometres from her village.

“My brother cannot get around on his own,” she explains. “There is no school bus, so I must accompany him on a microbus every morning and wait under the trees outside the school with the other mothers and sisters until his classes finish and I can take him home.”

Ibrahim says that besides the added cost of school transportation, the responsibility prevents her from working, further reducing the family’s income.

Abeer Eslam, a former programme manager at Wayana International Foundation for Integration and Awareness, a local NGO working to integrate people with disabilities into the community, says transportation is one of the biggest obstacles for Egyptians with disabilities.

“Our city planners have completely overlooked the disabled,” she says. “Moving in the streets is extremely difficult for them. Imagine not being able to hear cars honking and having to walk in the middle of the street because there are no sidewalks, or having to be carried up stairs because there is no wheelchair access.”

“Public transport and uneven sidewalks are hard enough for normal people to manage, let alone those with mobility disabilities or in a wheelchair,” she adds.

MOVE’s Helmy says the transportation gap typifies Egyptian society’s attitude towards people with disabilities, either ignoring their existence, or identifying them exclusively in terms of their disability.

“We need to change the culture, to make Egyptians aware that people with disabilities exist,” she says. “It’s not just about teaching people how to accept disabilities, it’s about making integration not the exception but the norm.”