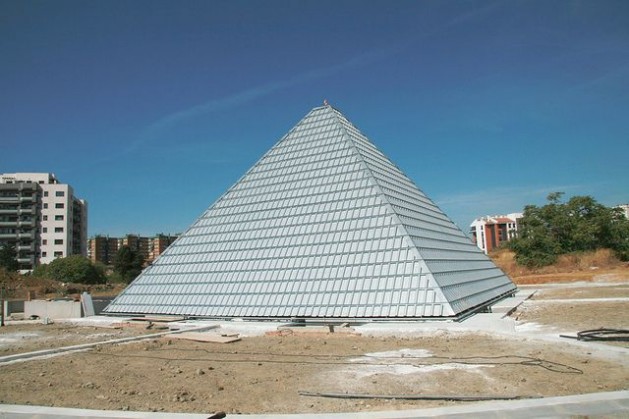 The remains of 2,840 victims exhumed from a common grave will be laid to rest in the memorial in the old San Rafael cemetery in Málaga. The families will be able to reclaim them after each body is identified. Credit: Inés Benítez/IPS

MALAGA, Spain, Sep 27 2013 (IPS) - A pyramid is being built in the old San Rafael cemetery in the southern Spanish city of Málaga – a monument to thousands of people shot by firing squads here during the 1936-1939 Spanish Civil War and the 1939-1975 dictatorship of General Francisco Franco.

Their bodies were exhumed from the biggest of the mass graves from that era scattered around Spain.

On a Wednesday Sept. 25 visit to the cemetery, which was closed in 1987, IPS saw the nearly complete mausoleum in the shape of a pyramid, which will be covered in slabs of white marble engraved with the names of the people buried there.

The rest of the abandoned cemetery will be a public garden.

The monument and mausoleum will be completed in a few weeks. But it will be many years before the remains of each body to be placed there are identified and, in some cases at least, handed over to the families.

“We are asking that the bodies be removed from the ditches so they can be buried as people.” -- Francisco Espinosa

“The only thing I remember are my mother’s screams when they took him away,” said José Dorado, 79, who was three years old when Franco’s troops shot his father, Pedro Dorado, a railway worker, in the nearby village of Bobadilla.

It was 1937. The body of Pedro, 33, was dumped along with the corpses of his workmates in a huge ditch dug in the San Rafael cemetery, Dorado told IPS.

Documents show that 4,471 people were shot by right-wing firing squads here during the civil war and the early years of the dictatorship, presumably because they were “republicanos” – in other words, they belonged to the side that was defeated by the Franco troops or Franquistas in the civil war.

From October 2006 to October 2009, 2,840 bodies were recovered here, in one of the largest exhumations carried out in Western Europe.

The rest of the bodies may have been moved at some point to the Valley of the Fallen in Madrid – a monument that the Franquistas built in the 1940s and 1950s, said Francisco Espinosa, with the Málaga Association against Silence and Oblivion – Historical Memory, which represents more than 400 relatives of victims.

Dorado, the president of the association, describes himself as “a person who likes to give battle.” In 2002, he started to wage the struggle to exhume the bodies in the common grave in San Rafael, which finally got underway in 2006.

The University of Málaga took DNA samples from the bodies to compare to the DNA from over 1,000 relatives of the people killed here, Antonio Somoza, a founding member of the association, told IPS.

The remains now lie in boxes, waiting to be put in the new mausoleum.

The names of the 4,471 victims have been identified. But it will take years to match the specific remains in the boxes to names, Somoza explained, adding that none of the 2,840 bodies recovered had been specifically identified so far.

Over the space of four decades, between 88,000 and 130,000 people were killed and buried in common graves across Spain, and some 30,000 babies were stolen and sold in illegal adoptions, according to human rights groups.

“We are asking that the bodies be removed from the ditches so they can be buried as people,” said Espinosa, 76, who has struggled for over three decades to find the body of his father, a carpenter from Argentina.

“My father died here. I was still in my mother’s belly, and my brother was three years old,” he told IPS in the San Rafael cemetery.

No attempt at investigating the mass graves around the country has been successful, because the courts invoke the 1977 amnesty law that blocks investigation or prosecution of Franco-era human rights crimes.

Moreover, the conservative government of Prime Minister Mariano Rajoy closed down the office that was coordinating the exhumations around the country and the funds collecting money to help pay for the costly DNA tests.

Emilio Silva, the 47-year-old grandson of another of the Málaga victims, took part in a Monday Sept. 23 meeting in Madrid with two experts from the United Nations Working Group on Enforced and Involuntary Disappearances visiting Spain Sept. 23-30 to examine the measures taken by the government on the prevention and eradication of forced disappearance, and the response given to the victims’ families.

In the meeting, the victims’ relatives asked the Working Group to review its decision not to address forced disappearances committed before 1945, when the United Nations was founded.

“We have hundreds of well-documented cases from prior to that date, and forced disappearance is an ongoing crime [not subject to any statute of limitations],” Silva told IPS.

His grandfather, Emilio Silva, was executed in October 1936 in Priaranza del Bierzo, in the northern Spanish province of León.

“He was the first victim of Franquista repression in Spain to be identified through a DNA test,” said Silva, a member of the Association for the Recovery of the Historical Memory. “Now he is buried next to my grandmother.”

The U.N. experts “should be flexible and should accept the cases of forced disappearance dating before 1945. If they don’t, the majority of the cases of the victims of reprisals will be left out,” said trade unionist Cecilio Gordillo, who coordinates the Todos los Nombres (All the Names) web site, which has a list of the names of nearly 78,000 victims.

There is a possibility that the Working Group will reconsider its decision when it presents its final report to the U.N. Human Rights Council in 2014.

The Working Group urged the government to repeal the 1977 amnesty law.

The Truth Commission Platform launched the campaign #DiseloalaONU (Tell the U.N.) this week, to denounce that “there are more than 2,500 common graves that have not been exhumed.”

Dorado hopes to bury his father’s remains in Bobadilla, where the body of his mother Pilar Cubero, who was 29 years old when her husband was killed, rests. “If I’m alive then [when the bodies are identified through DNA tests], I’ll take him there. I’ve already bought a niche,” he said.

On Tuesday Sept. 24, a Spanish prosecutor challenged the arrest of four former agents of the dictatorship requested by Argentine Judge María Servini.

Servini is investigating human rights crimes committed in Spain, based on the principle of universal jurisdiction. Hers is the only investigation of Franco-era crimes.

The trade unionist Gordillo, who met Friday Sept. 27 with the U.N. Working Group experts in the southern city of Seville, said one aspect of Judge Servini’s investigation involves forced labour to which political prisoners were subjected in Spain.

“The state ‘rented out’ prisoners to private companies, which used them as slave labour to build roads, airports and canals. There were around 250,000 victims of forced labour,” said Gordillo, whose great-uncle was killed by the firing squads.

Emilio Silva said most of the exhumations around the country have been carried out thanks to the work of the victims’ families and volunteers.

Miguel Alba, another founding member of the Málaga association of families, is the grandson and great-grandson of a mayor and justice of the peace who were killed by the firing squads.

For eight years, he has investigated forced disappearances in 31 villages and towns in Axarquía, a comarca or region east of Málaga.

“It’s not about opening old wounds,” Alba told IPS. “It’s about closing them in good conditions, and without political bias.”