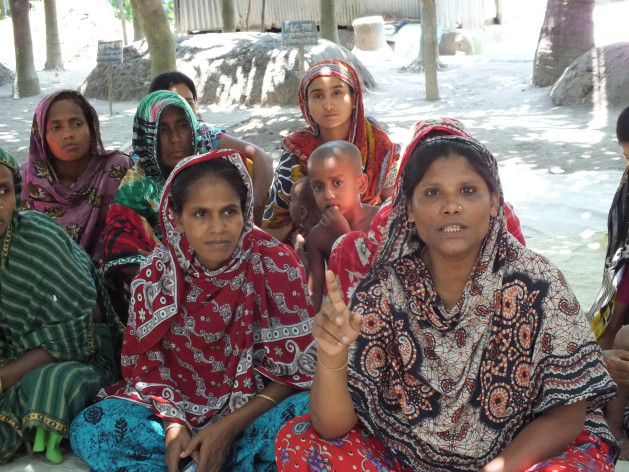 DHAKA, Nov 5 2013 (IPS) - On a hot and humid day in northwestern Bangladesh, Anisa Begum sits with a group of 25 homemakers, explaining how to use natural fertilisers to increase grain yield.

The 47-year-old mother of two tells them if men can grow crops and make money, so can women. She is a leader of the Common Interest Group (CIG) that brings together women who want to take up farming in this South Asian nation.

Begum has got hands-on training from the local agriculture office on how to maximise crop yield from natural fertilisers. She and nine other successful women farmers last year visited Vietnam, a country known for its efficient grain harvest.

“More than two million farmers, 30 percent of them women, are now adopting new technologies in project areas in the northwestern districts.”

“This is a wonderful feeling,” a smiling Begum tells IPS, standing at the courtyard of her home in Islampur village in Rangpur district in northern Bangladesh.

This year she has trained a dozen or so fellow CIG members in the Pairabond area of Rangpur, 255 km from the Bangladeshi capital Dhaka, and says an increasing number of women have been showing interest in new and improved farm practices.

The CIGs, formed with the help of local agriculture offices, are part of a programme to enhance farm productivity for food security in Bangladesh – the National Agriculture Technology Project (NATP).

“It is absolutely incredible,” says NATP monitoring and evaluation officer Mizanur Rahman. “More than two million farmers, 30 percent of them women, are now adopting new technologies in project areas in the northwestern districts.”

But traditionally women have been more involved in household work than agriculture. A study titled ‘Economic contribution of women in Bangladesh’ reveals that just about 21 percent of women in rural areas are directly engaged in agriculture compared to 78 percent of men. The study was carried out in 2008 by the Bangladesh Bureau of Statistics with several partners.

So the idea behind the free training to women was also to encourage small entrepreneurship in agriculture. The local agriculture office has been very supportive.

Sarwarul Haque, agriculture officer in Mithapukur sub-district, tells IPS: “Initially we had a hard time convincing women to invest more time in agriculture. We demonstrated how they could adopt new technologies and reap benefits.”

Through the CIGs, women learn new technologies such as cultivating drought-resistant and high yielding aromatic rice, vermicomposting and planting all-season tomato seeds that keep the crop free of the leaf curl disease.

Rowshan Ara, a successful woman agriculturist in Pairabond, tells IPS: “When the demonstrations began in Islampur village, there were hardly any women who showed an interest in agriculture.

Before joining the CIGs, many of the women used to be farm labourers, earning as little as Taka 70 (88 cents) a day for 10 hours of physical labour, cultivating and harvesting rice.

A woman farm labourer, depending on the season and the size of the cropland, can make a maximum of Taka 1,500 or 20 dollars a month.

Increasing participation in agriculture has changed things. A woman can now earn anything between Taka 5,000 and 8,000 (64 dollars and 100 dollars) a month by growing fine quality grain that is in great demand abroad.

Momena Begum, 42, says, “I chose vermicomposting and by the end of last year I sold vermin [red earthworms] worth 4,500 dollars. I made a nearly 30 percent profit.”

Vermicomposting has become very popular as farmers reap rich benefits from a healthy soil. It is cheaper than chemicals (less than 25 cents a kg). Producing pest free seeds at home is another popular practice.

Parul Sarkar, Momena Begum’s neighbour in Pairabond, says: “I learnt how to produce natural fertiliser from decomposed water hyacinth. The plants are available in plenty, so there is hardly any need for big investment. The fertiliser gives one and a half times the yield compared to chemical fertilisers in vegetables. With a small investment I started supplying the local market.”

Sarkar made over 380 dollars from the sale of natural fertilisers in the first quarter of this year. The income was in addition to the 90 dollars her husband earned from hard labour harvesting crops.

A growing number of women have been joining the CIGs. From less than 20 such groups in Mithapukur in 2009, the number has now gone up to more than 240.

Such efforts to boost national food production are designed and jointly funded by the World Bank, International Fund for Agriculture Development (IFAD) and the government in a 82.6 million dollar project known as the National Agriculture Technology Project (NATP).

Adopting new technology in agriculture has had tremendous impact. Retailers, brokers and wholesalers prefer to market natural fertiliser-based vegetables and grains as they are cheaper compared to crops grown with chemical fertilisers.

“The potatoes and tomatoes grown using natural fertilisers show a healthy and glazed look,” says Raja Miah, a wholesaler in Bogra district. “One can tell the difference.”