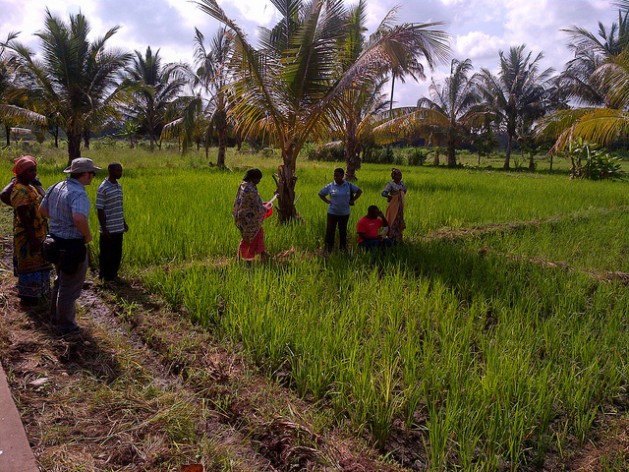 Clashes between farmers and pastoralists over land and water are an ongoing problem in Tanzania. Pictured here are rice farmers from Kiroka village, in Tanzania’s Morogoro Region. Credit: Kizito Makoye/IPS

DAR ES SALAAM, Tanzania, Jan 16 2014 (IPS) - Tanzanian authorities are finding it increasingly difficult to deal with ongoing conflicts between farmers and pastoralists as they fight over limited land and water resources in this East African nation.

From Tanzania’s Coast Region to Kilimanjaro, violent and sometimes deadly clashes have been raging for decades as farmers and pastoralists scramble for resources.

Most recently on Jan. 12, 10 people were killed in Kiteto district in central Tanzania when Maasai pastoralists allegedly invaded villages in the disputed Embroi Murtangosi forest reserve and set homes ablaze. Local farmers accused district officials of colluding with Maasai pastoralists to intimidate farmers living on the reserve in an attempt to chase them off their land.

“It’s no secret, we are being harassed because there are certain people who are getting paid to evict us from this area,” Kisioki Mesiaya, a farmer in Kiteto district told IPS.

Pastoralists, who are generally more affluent than farmers here, have been accused of influencing political decisions through bribery.

Tanzania has approximately 21 million head of cattle, the largest number in Africa after Ethiopia and Sudan. According to the ministry of livestock and fisheries development, livestock contributes to at least 30 percent of agricultural GDP.

“Land disputes are fuelled by officials … who have been soliciting bribes in terms of money and livestock from pastoralists to evict farmers on the pretext that the land occupied by farmers is a reserved area,” Ndugai said in December from his constituency in Kongwa, in the country’s capital, Dodoma.

Kiteto district commissioner Martha Umbulla, however, dismissed this as false. “There’s nothing like that, those allegations are not true,” she told IPS.

Yefred Myenzi, a researcher from the Land Rights Research and Resources Institute known locally as HakiArdhi, told IPS that most of the fighting over land was the indirect result of decisions and actions taken by the state through its various agencies.

He said that the struggle for land and water was a result of lack of public awareness and knowledge of the country’s laws, inadequate participation of local people in policy and law formation, and violation of laws by district officials. Of Tanzania’s 42 million people, only 0.02 percent have traditional land ownership titles.

“We have seen the influx of investors who take swathes of land to start commercial farming ranching or mining activities, in the process triggering conflicts with local people who are evicted from their land without due process,” he added.

He blamed the existing land tenure system for sidelining pastoral communities since no land has been set aside for them.

“Although land laws require every village to have in place a land use plan, many villages are yet to implement this due to conflict,” he said.

Myenzi warned that although a conflict resolution mechanism offered hope, disputes over land are likely to persist due to corruption and a weak system of reinforcement.

Henry Mahoo, professor of agricultural engineering at Tanzania’s Sokoine University of Agriculture, told IPS that in order to resolve tensions between the two groups, a land use plan, which will clearly identify areas under pastoralists’ ownership and those controlled by farmers, should be drawn up.

“The problem [behind] these clashes is deeper than we think. All concerned parties must be involved in the negotiation process, and there must be a forum where farmers and pastoralists openly talk about their problems,” he said.

“I think these conflicts are a sign of a growing social problem. There are so many idle minds out there who can be incited to do anything,” he added.

Meshack Saidimu, a Maasai pastoralist in Mbalali, told IPS that most of the disputes occurred because the government has not set aside areas for pastoralists.

“I think we are being made scapegoats for all these problems. The Maasai are disciplined people they don’t just hurt somebody for the sake of it,” he said.

The disputes over land and water have also caused food insecurity among farmers, many of whom have been unable to harvest crops for fear of reprisals from enraged pastoralists.

“In analysing land conflicts we need to critically look at the issue. The farmers complain that pastoralists let their animals trample on their crops while searching for water and pasture but herders argue that there are paths that cattle use without causing damage to crops,” Myenzi said.

But he said a lasting solution could be found only if pastoralists and farmers respect and value each other.