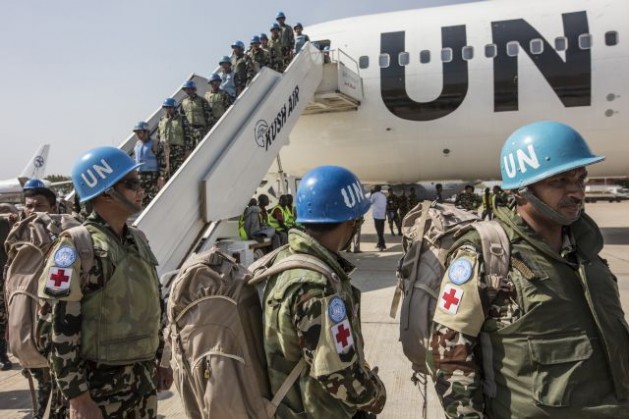 A contingent of Nepalese peacekeepers arrives in Juba, South Sudan from Haiti on Feb. 4 to support UNMISS, after an outbreak of violence in mid-December between pro- and anti-government forces. Credit: UN Photo/Isaac Billy

UNITED NATIONS, Feb 26 2014 (IPS) - An interim human rights report released by the beleaguered U.N. peacekeeping mission in South Sudan is being tentatively hailed by rights groups and observers who have pressured the mission to be more transparent with its findings.

The report, delivered to the Security Council Friday and tweeted by the mission, UNMISS, on Sunday, is an overview of evidence collected by its roughly 80 human rights officers dating from the outbreak of violence on Dec. 15 through the end of January.

“Malakal is deserted, with houses burned throughout and countless dead bodies strewn in the streets.” -- Carlos Francisco

Jehanne Henry, senior Africa researcher at Human Rights Watch, who returned last week from Bentiu and Rubkona, said she welcomed the report but stressed that in a country beset by impunity, regular reporting from the mission would serve as a powerful deterrent against atrocities.

“This is definitely a good step, but it is also clear that this is an interim report,” Henry told IPS, adding that the mission didn’t provide “any recommendations, fact-finding or legal analysis.”

“We would have wanted to see more regular public reporting that might have prevented some of this,” said Henry.

Based on more than 500 interviews with civilians and officials, the report contains accounts of mass ethnic-based killings, gang-rapes and torture carried out by government troops and various militias in opposition.

The mission said it was also investigating reported mass grave sites in Juba, Bentiu and Rubkona.

Shortly after fighting broke out in Juba, the report states, “Sudan People’s Liberation Army (SPLA) soldiers were reported to have engaged in targeting killings of civilians of Nuer origin following house-to-house searches.”

Meanwhile, in the strategic oil city of Malakal, Dinka civilians were the alleged targets of defected Nuer SPLA and national police elements and of the so-called Nuer White Army.

The report came as a surprise to some observers who had expected nothing public until the end of April, when the mission delivers its full report to the Security Council.

*NB: Statistics for international and local civilians are as of 31 August 2013. Source: UNMISS

But the interim document does not contain charges or name individuals under investigation. UNMISS human rights chief Ibrahim Wani defended that decision Wednesday, saying “the most important response to such allegations is obviously the credibility of the report itself.”

Outside of what it sends the Security Council, UNMISS has released publicly only two human rights reports in its nearly three-year history.

Both sides in the conflict appear to be ignoring the cessation of hostilities reached by negotiators in Addis Ababa on Jan. 23. Shortly after it was signed, government forces reportedly retook Leer, the hometown of rebel-leader Riek Machar, burning down much of the town and forcing thousands to flee.

On the day of the interim report’s release, the U.N. said it had found 50 bodies in Malakal and more at a local teaching hospital where the medical charity MSF said many had been shot through the head, execution-style.

“Malakal is deserted, with houses burned throughout and countless dead bodies strewn in the streets,” said Carlos Francisco, MSF’s emergency coordinator in Malakal.

On Sunday, the British NGO Oxfam was forced to evacuate all of its workers from the city.

Malakal has already changed hands at least five times and the ethnic makeup of the overflowing U.N. camp there largely depends on what army is currently laying siege to the city.

Last week, the U.N. base there reported that during gun battles outside its walls, inter-ethnic fighting broke out within the camp, resulting in the deaths of six and injuring more than 43. Though UNMISS denied it via Twitter, former BBC journalist Martin Plaut reported fighting took place at the Malakal camp not only between displaced persons but between local U.N. employees.

On Feb. 11, a mission spokeswoman informed IPS the interim report wouldn’t be public but rather was “an internal report similar to a roadmap that will indicate trends based on initial findings and lead to” the late April Security Council Report.

Sources at the U.N. who were aware of the report’s delivery to the Security Council Friday said they were unsure until the last moment whether it would be made public. Though the report stresses its findings are still provisional, it does appear the mission changed its mind at some point over the past several weeks and decided to post the 21-page document publicly on its website.

UNMISS’ special representative Hilde Johnson has come under criticism for her perceived closeness with the government of President Salva Kiir. Human rights groups specifically alleged that the mission under her command should have been more vocal, via regular reporting, about human rights violations that foreshadowed the current conflict. Hilde Johnson, Special Representative of the Secretary-General for South Sudan and Head of the UN mission in the country (UNMISS), speaks at U.N. Day celebrations organized by UNMISS in South Sudanese capital Juba on Oct. 24, 2012. Credit: UN Photo/Isaac Billy

Observers close to the U.N. and UNMISS suggest that when the mission’s mandate is renewed – as it is expected to be – in July, a new special representative will likely be appointed. One diplomatic source who spoke with IPS anonymously said Johnson, feeling heat from U.N. headquarters over her bunker mentality and paralysis over reporting, is perhaps now less inclined to safeguard relations with a government more belligerent towards her by the day.

In a statement that accompanied the release, Johnson spoke of accountability and said “without bringing to justice the perpetrators of these horrendous crimes, revenge and impunity is likely to lead to a perpetual cycle of violence.”

“Some observers say she was too close to the government,” D’Souza told IPS.

“But in this position, it shows that they are working to be seen as more impartial – throughout the report, there were signs that SPLA soldiers were engaged in targeting of civilians, said D’Souza. “By being impartial, you come under pressure from one side or the other.”

Indeed, upon learning of it, a government spokesperson called the interim report “pure fabrication.”

South Sudan’s 2011 independence failed to bring about a mechanism for south-on-south justice, allowing longstanding schisms in the ruling SPLM to metastasise into a body politic that only staved off collapse by rewarding rebel leaders with ministries and by applying the salve of oil money to succour displeased leaders.

Those schemes came to an abrupt halt on Dec 15, when Kiir, a Dinka, accused his former vice-president and longtime rebel comrade Machar of plotting a coup. Machar denied those charges but fled to take control of a mostly-Nuer rebel force, though his command over erratic groups with local grievances has been questioned throughout the conflict.

Soon after violence began, the African Union (AU) began piecing together a commission of inquiry into the conflict. Recent efforts by the AU to distance itself from the International Criminal Court (ICC) has led to suspicions that the inquiry is at least in part an effort to elude the spectacle of yet another African leader on trial in the Hague.

“You can probably argue that some countries want to sidestep the ICC, however the commission of inquiry is still a huge deal,” said D’Souza. “It is very important for the international community to open its own investigation to complement national initiative.”

“South Sudan has a history of impunity which perpetuates the cycle of intercommunal violence. It’s absolutely critical that UNMISS human rights officers are able to interview senior leadership of both the government and the opposition to analyse the command and control structure and see who should be held accountable within them.”