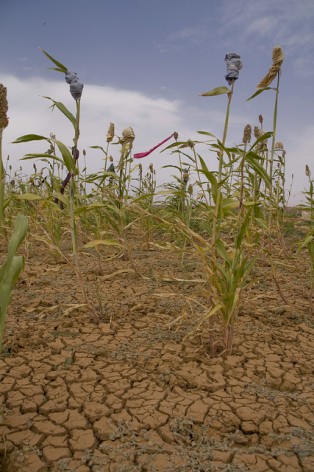 In 2012 recurring droughts destroyed most harvests in the Sahel. This year feeding chronically hungry people in the Sahel has been compromised by regional conflict that has created almost one million refugees. Credit:Kristin Palitza/IPS

TUNIS, Mar 28 2014 (IPS) - Still not enough is being done to improve the food emergency in Africa’s Sahel Region as conflict and instability continue to exacerbate any response towards aiding a region where one in eight people suffer from food insecurity.

“The main problem we have is that food is not reaching conflict areas such as Central African Republic (CAR) because of insecurity. Until now, there has not been enough of a response from the international community, especially given the proportion of the disaster foreseen,” Jose Graziano da Silva, director-general of the Food and Agriculture Organisation of the United Nations (FAO), told IPS at the organisation’s regional conference being held in Tunisa from Mar. 24 to 28.

Last month, the U.N. appealed for more than two billion dollars to address the needs of 20 million “food insecure” people across Africa’s Sahel, a semi-arid area beset by persistent drought and chronic food insecurity stretching from the Sahara desert in North Africa and Sudan’s Savannas in the south. It is described by the U.N. as “one of the world’s poorest and most vulnerable regions.”

New research by international NGO Action Aid highlights how Nigeria and Senegal are alarmingly unprepared to cope with a worsening food crisis.

John Abuya, head of Action Aid’s international humanitarian action and resilience team, told IPS: “Disaster preparedness structures at regional and community levels are still weak and need to be strengthened so as to provide the necessary response and resilience in case of an emergency.”

“Based on early warning signs, it is likely that the Nigerian and Senegalese governments will be overwhelmed if their food crisis escalates. Although Nigeria has a National Emergency Management Authority, its response at state level has been weak and resources have been allocated inadequately by the central government,” Abuya said.

Food insecurity in the Sahel is set to increase in 2014 by 40 percent compared to 2013 when 11.3 million people had inadequate food and required around 1.7 billion dollars in donor assistance.

Feeding chronically hungry people in the Sahel has been compromised by regional conflict that has created approximately 724,000 refugees and 495,000 internally displaced persons.

According to the latest data from the U.N. Office for the Coordination of Humanitarian Affairs, Chad’s open-door policy has resulted in it receiving 419, 000 refugees (86,000 from CAR, and 333,000 from Darfur, Sudan).

Out of the 103,000 refugees residing in Mauritania, a majority are from Mali and Western Sahara, while Burkina Faso has received 43,000 refugees from Mali since the crisis there began in 2012.

Following Mali’s military coup in March 2012, terrorists and criminal organisations exploited the country’s power vacuum and occupied the northern territory creating a huge displacement of the population. It resulted in a refugee outflow into Burkina Faso, Mauritania, Niger, and, to a lesser degree, Algeria and other countries.

Mali maintains it has the capacity to feed its people but is restricted by poor infrastructure and instability in the north.

“Mali’s problem is not agricultural, it is a logistical problem about transporting the food to people. The crisis and the instability in the north is not permitting us to use the roads safely. Therefore the food that farmers produce is restricted in its movement because of insecurity,” Issa Konda, head of Mali’s agricultural delegation attending the FAO conference, told IPS.

Despite efforts to stabilise Mali, including the deployment of a peacekeeping force and presidential elections in mid-2013, very few Malian refugees want to return due to the fragile humanitarian and security situation.

Niger’s severe food shortages due to recurrent drought have also been compounded by conflict in neighbouring countries. Half of the country’s 17 million people are without adequate food all year round, while one in 10 is unable to feed themselves for three months of the year.

Conflict in northern Mali, southern Libya, northern Nigeria and CAR has put pressure on Niger’s resources to deal with its food crisis as thousands of displaced civilians take refuge in the country due to its porous borders.

Since 2012, Malian refugees have regarded neighbouring Niger as a safe haven. According to the U.N. Refugee Agency, over 51,000 refugees (47,000 from Mali and 4,000 from Nigeria) have entered the country as a result of regional conflict.

Last year’s rainy season in Niger, which lasted from July to October, was disappointing says the country’s Minister in the President’s office for the national strategy for food security and agriculture development, Amadou Diallo.

“The situation is dire and has not been improving for several years. We are unable to meet the food demand. The problem is that demand is growing from rising population numbers and incoming refugees, in addition to terrible drought our food supply is being compromised,” he told IPS.

Of the 25 countries listed by the U.N. as being vulnerable to becoming failed states, 13 are in the Sahel. Breaking the cycle of recurrent food crises in the region is next to impossible while there is limited security says Gerda Verburg, chairperson of the Committee on World Food Security.

“In the Sahel we have the solutions. We have the capacity. We have the willingness.  However, as long there is insecurity then food production and access to food is at risk.  There is not enough reliability and stability for us to adequately address food insecurity in the Sahel,” she told IPS.