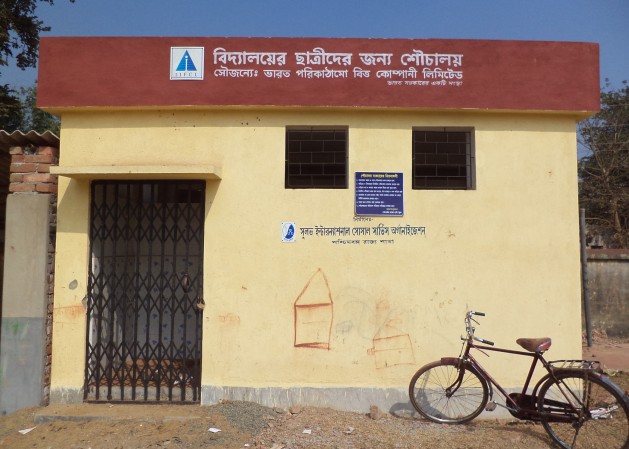 A new toilet for girl students at a school in Murshidabad district in the eastern Indian state West Bengal. Credit: Sulabh International/IPS.

KOLKATA, Apr 19 2014 (IPS) - In large parts of rural India, the absence of separate toilets for growing girls is taking a toll on their education. Many are unable to attend school during their menstrual cycle.

According to the country’s Annual Status of Education Report in 2011, lack of access to toilets causes girls between 12 and 18 years of age to miss around five days of school every month, or around 50 school days every year.

“There is a sharp increase in the dropout rate, mainly among girls, as they move from primary to upper primary, because we cannot till date provide them proper toilets."

The country’s Supreme Court had ruled in 2011 that every public school has to have toilets. But a pan-India study, ‘The Learning Blocks’, conducted by the NGO CRY in 2013, shows that 11 percent of schools do not have toilets and only 18 percent have separate ones for girls. In 34 percent of schools, toilets are in bad condition or simply unusable.

Atindra Nath Das, regional director of CRY East, told IPS, “Children do not have safe drinking water, schools still do not have their own building and toilets are missing. No wonder 8.1 million children in India are still out of school.

“There is a sharp increase in the dropout rate, mainly among girls, as they move from primary to upper primary, because we cannot till date provide them proper toilets,” he said.

A 2010 report by the U.N. University Institute for Water, Environment and Health noted, “Once girls reach puberty, lack of access to sanitation becomes a central cultural and human health issue, contributing to female illiteracy and low levels of education, in turn contributing to a cycle of poor health for pregnant women and their children.”

According to India’s 2011 census data, national sanitation coverage is 49 percent but the rural figure is worse, at 31 percent.  It is even lower for Dalits or socially marginalised communities (23 percent) and tribal people (16 percent).

Lack of sanitation facilities is still a stumbling block for the effective spread of health and education programmes in many parts of rural India.

Mahila Jagriti Samiti (MJS), an NGO working in Jharkhand, an economically backward state in eastern India with a large tribal population, has been conducting awareness programmes on the use of sanitation, but is not very happy with the results.

Mahi Ram Mahto, director of MJS, told IPS: “We have done 300 sanitation programmes, even helping to build toilets in homes with funding from government agencies, but only 15 to 20 percent of the beneficiaries use them.”

Without a cistern for flushing, the toilets pose a problem, he says. “People have to carry water in buckets from a common water source like a hand pump or a pond; most households do not have taps. They say they might as well go to the open field.”

In 1999, India launched the Nirmal Bharat Abhiyan or Total Sanitation Campaign, a community-based programme, under which it gives an equivalent of about 80 dollars to a household to set up a toilet. But many poor people say that is not enough and still defecate in the fields or by railway lines.

The campaign has “provisions for toilet facility and hygiene education in all types of government rural schools (up to higher secondary or class 12) with emphasis on toilets for girls.”

But provisions alone do not help, activists say.

Access to water for toilets is a major problem in many rural schools in the eastern state of West Bengal, says Vijay K. Jha, honorary controller at the state branch of Sulabh International. The NGO leads one of the world’s biggest and most successful sanitation programmes.

“We have worked in 50 schools in Murshidabad district of India’s eastern state West Bengal, providing infrastructure and running awareness programmes on hygiene. Plans are afoot to extend the work to 100 more in the near future,” Jha told IPS.

Despite separate toilets for girls, the results are not satisfactory. As in the case of Jharkhand, non-availability of water hinders toilet use. Most schools do not have water pipes running up to the compounds.

Diara Hazi Nasrat Mallick High School in Murshidabad district, where Sulabh has constructed a separate toilet, is a typical example.

Alaul Haque, the school headmaster, told IPS, “We are happy that this facility has been built. But girls still have to bring water from the tubewell because there’s no water pipe connection in the school yet.” Half of about 300 students at the school are girls.

Another institution in the same district, Gayeshpur High School, has the same complaint. “With around 300 girl students in our co-ed school, we need at least two toilets. We were happy that the toilet has been built, but it still lacks flowing water,” headmaster Prasanta Chatterjee told IPS.

The government scheme under which NGOs take up the work of building toilets does not include providing water pipes – a task that depends on local agencies.

Girl students during the menstrual cycle are advised not to carry heavy objects like buckets filled with water; so they avoid school altogether during those days if there is no easy access to water in the toilets.

Under India’s Right to Education Act of 2009, which recognises the right of children to free and compulsory education till the completion of elementary school, provision of proper toilets as part of school infrastructure is mandatory, says S.N. Dave, WASH (water, sanitation and hygiene) specialist at Unicef Kolkata.

Dave told IPS: “West Bengal being in a riverine area, water is not much of a problem. But there is scope for improvement in terms of better coordination between agencies.”

Some states like Kerala in the south and Sikkim in the northeast fare better.

According to a Planning Commission study in 2013, Sikkim had the best performing gram panchayats (village councils) and maintenance of sanitation facilities, having achieved 100 percent sanitation.