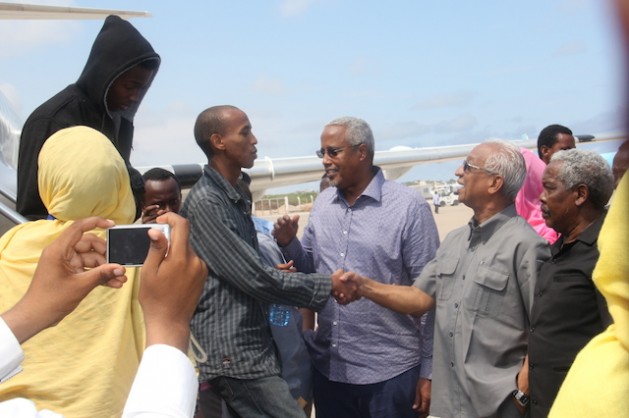 Somalis deported from Kenya are greeted by Minister for Transport and Air Travel Said Jama Qorshel (blue shirt), State Minister for Foreign Affairs Buri Mohamed Hamza (shaking hands with deportee) and the director of Somali Immigration Department, General Abdullahi Gafow Mohamud (black shirt). It is estimated that some 500 Somalis have been deported, while a further 4,000 are detained in Kenya. Credit: Abdirahman Omar Abdi/IPS

NAIROBI, May 27 2014 (IPS) - Somalia’s State Minister for Interior and Federalism Affairs Mohamud Moalim Yahye has told IPS that the hasty repatriation and mass deportation of its citizens by Kenya could compromise recent, critical security improvements made by regional governments against the Islamic extremist group, Al-Shabaab.

“The unplanned and uncoordinated deportation of people, especially the youth, will create chaos and anarchy as there are no resources to support and create jobs for them,” Yahye told IPS by phone from Mogadishu, Somalia’s capital.

The Somali government has asked that Kenya suspend the current mass deportation of its citizens, which began early April, until the Tripartite agreement for repatriation of Somali refugees is implemented.

The agreement, which was signed last year by the two governments and the United Nations Refugees Agency, aims to send refugees back to Somalia over the next three years. However, the agreement only outlines the voluntary and organised repatriation of refugees to Somalia.

Yahye said that Somalia, where the unemployment rate for youth aged 14 to 29 is one of the highest in the world at 67 percent, did not have the capacity to receive and integrate large numbers of returning refugees and deportees.

As a result, security experts, government officials and politicians in Mogadishu and Kenya’s capital, Nairobi, have raised concerns that deportees and returnees could be vulnerable to recruitment by Al-Shabaab, which desperately needs new blood.

“These young men, if they join the militants, will be an asset that could help the group wreak havoc not only Somalia and Kenya, but the greater region of East Africa,” Zakariye Yusuf, an analyst with the International Crisis Group, told IPS.

Kenya is home to more than one million Somali refugees, half of whom are unregistered migrants, according to Kenya’s Ministry of Foreign Affairs and International Trade.

Kenya’s Usalama Watch — which resulted in over 4,000 people, all most of all of them Somali refugees and migrants, being taken into custody — has resulted in the repatriation of about 500 people to Somalia.

Hundreds are awaiting deportation, according to the Somali Embassy in Kenya. Airline and travel agencies officials say a further 7,000 people — half of them youth — fled Nairobi to Mogadishu after the operation was launched.

Thousands of others are believed to have crossed the Kenyan border and returned to Somalia.

Because of their knowledge of the Swahili language and the culture of the region, Yusuf said these Somali youth could be assigned by Al-Shabaab to return to Kenya, and possibly other East Africa countries, to carry out terrorist activities.

“It will be easy for them to hide, infiltrate the society and run safe houses while coordinating operations than other members who haven’t lived in Kenya,” he added.

Al-Shabaab has been suffering from a lack of financial constrains after losing its foothold on Mogadishu and the port town of Kismayo. The group has also experienced a shortage of foot soldiers over the past three years. Hundreds of its fighters have either been killed, sneaked out of the country, or deserted over to the government, which is promised them amnesty, protection and a better future.

“These young men used to run small scale business or work as shop-sellers in Nairobi, but their life is being interrupted by the crackdown and the deportation,” Abdiwahab Sheikh Abdisamad, a Horn of Africa specialist at Kenyatta University in Kenya, told IPS.

“They are now hopeless back in their country and desperate for doing whatever could help them to make a living. That’s the type of recruits Al-Shabaab is looking for,” he said.

He added that the group, which claimed responsibility for September’s four-day terror siege on Kenya’s Westgate Shopping Mall that resulted in the death of about 67 people, was a dying horse.

“Sending or deporting people, especially young men back to Somalia, is simply giving a lifeline to Al-Shabaab, which has a history of forced recruitment of youth, at crucial moment,” said Abdisamad.

He explained that the deportees and returnees could join the militants either to earn a wage to support their families or for revenge because they feel humiliated and abused by Kenya.

He said the deportations created a situation where Al-Shabaab had an opportunity to recruit energetic and cheap foot soldiers.

“When you mishandle the issue of terrorism, it has a lot of repercussions and that’s what the militants wanted and waited for years for. As a result, nothing has improved in terms of security since the operation was launched,” Abdisamad noted.

Indeed, a senior Al-Shabaab commander Fuad Mohamed Khalaf said last week that his group would be shifting its war to neighbouring Kenya, and threatened to send teenage suicide bombers to Nairobi.

Khalaf urged Muslims in Kenya to fight against their government for the retaliation of their “Muslim brothers” killed in Kenya and Somalia.

Abdisamad pointed out that the operation, which has been marred by lack of clear counter-terrorism strategy,  abuses and harassment, has been counter-productive and serves as a perfect conduit for the Al-Qaeda-linked group’s recruitment.