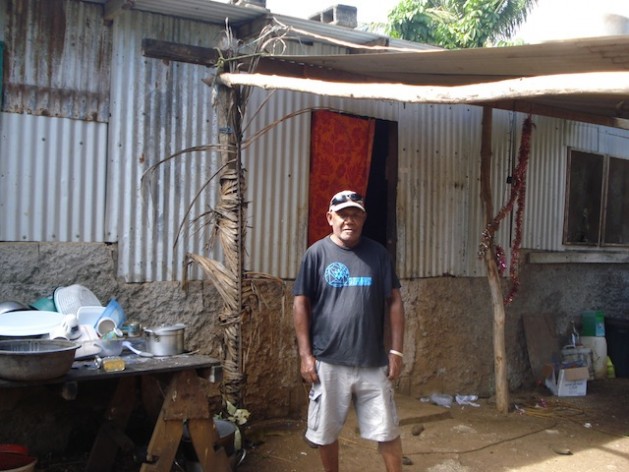 Chief Maki Massing stands outside his modest dwelling built of cement and corrugated iron in an informal housing settlement in Freswota, outside of Port Villa. Credit: Catherine Wilson/IPS

PORT VILA, Jun 10 2014 (IPS) - Rapid migration to cities and towns, driven by scarce public services and jobs in rural areas, is producing a profound social shift in Pacific Island countries, where agrarian life has dominated for generations. But the urban dream remains elusive as a severe lack of housing forces many into sprawling, poorly-serviced informal settlements.

In the southwest Pacific Island state of Vanuatu, which has a population of 247,262, the urban growth rate is four percent, the second highest in the region after the Solomon Islands.

On the outskirts of the capital, Port Vila, with a population of 44,000, is Freswota, comprising six areas known as Freswota 1-6, which are home to an estimated 8,000 people.

Chief Maki Massing, originally from west Ambrym Island in the nation’s northern provinces, is a widower with six children who has lived in Freswota 4 for 30 years.

"If you don’t find work, you must go back to your island, because Port Vila is a very expensive town." -- Chief Maki Massing, community leader in Freswota
As the late afternoon sun fades, light bulbs strung across the front yard of his compound illuminate the house Massing built of cement and corrugated iron. Colourful lengths of fabric curtain the doorways. Early evening bustle fills the nearby street as he tells me why he left his rural village of Lalinda.

“My children came to Port Vila for school,” he explained. “As my income in the village from growing copra was not very good, I came here to find work so I can pay the school fees.”

Massing is fortunate to have landed a job in the formal sector. After working in a bank for 15 years, he joined the state ministry of health, where he has been employed since 1992.

The circumstances of most people in Freswota vary from permanent employment to informal labour (with people taking jobs as market vendors selling fresh produce) to unemployment, but they share one commonality: low incomes and poor living conditions.

Frank William at the Port Vila Municipality Council told IPS that land in the capital has not yet been zoned for specific development uses, such as residential or commercial, which has hindered urban planning progress. “Some public housing is available for people who come to Port Vila to work,” he said, “but people on low incomes are still unable to afford them.”

The average cost of a basic decent house lies somewhere in the range of 31,600-52,700 dollars, which is out of reach for many local residents living on the minimum monthly wage of roughly 316 dollars. The National Housing Corporation, which is under-resourced, sells land without housing development to residents in Freswota 3-6.

The United Nations Development Programme (UNDP) reports that 16.8 percent of government workers and 17.1 percent of private sector employees in Port Vila live below the poverty line.

“For me, it’s too expensive because I must also pay for water, electricity, transport and school fees,” Massing said. Even with a government job, he has to earn extra money by renting out two small rooms in his house.

Throughout the Pacific Islands the scale of rural to urban migration dramatically outpaces job growth, availability of land and state capacity to expand housing and public services.

Thirty-five percent of all Pacific Islanders, in a region with a population of 10 million, now live in towns and cities. In Vanuatu, 25 percent of the national population are urban residents and this is predicted to rise to 38 percent by 2030.

Leias Cullwick, executive director of the Vanuatu National Council of Women, claims that a low minimum wage and high cost of living in Port Vila are tipping families into severe hardship.

“Eighty percent of people in urban areas cannot even afford one decent meal per day. In the hospitals, 70 percent of the women giving birth cannot afford enough healthy food, so [their] babies are going to be malnourished,” she said.

People’s lives are also affected by lack of basic services. Massing claims that water, electricity and roads are urgently needed in Freswota 4.

“For the first five years here, I had to go down to the river every afternoon to wash and collect water to bring back to the house,” he said.

Traditional community leaders, such as Massing, are taking initiatives to address social and development issues in urban settlements.

“I talked to the government on behalf of my people and they then provided some water and electricity in this area,” he continued.

And while he understands the desires that drive people to Port Vila from rural areas, Massing believes that the city is not the best option for everyone.

“I bring everybody together here and talk to them and say you must work to stay here. If you don’t find work, you must go back to your island, because Port Vila is a very expensive town,” he said, emphasising the need to prevent destitution and crime.

According to the Pacific Islands Forum, state institutions need to take measures to improve urban planning and reform the housing market in the interests of those in most need.

Many Port Vila residents, including Massing and Cullwick, are also concerned about the misuse of public funds allocated to improving infrastructure and services. The Vanuatu Corruption Commission, established last year, has a mandate to address political and administrative mismanagement.

Proposing a bottom-up approach, Cullwick said traditional housing in villages could be better utilised for those marginalised in towns. She believes adapting traditional dwelling designs and using readily available natural building materials, such as thatch and bamboo, could reduce the cost of constructing a safe and healthy house.

In the meantime, Vanuatu has joined the UN-Habitat’s Participatory Slum Upgrading Programme (PSUP), which aims to improve urban living conditions and progress toward Millennium Development Goal 7 – bettering the lives of at least 100 million slum-dwellers by 2020. Urban profiles, part of Phase 1, are currently being drafted ahead of the next phases of planning and implementation.