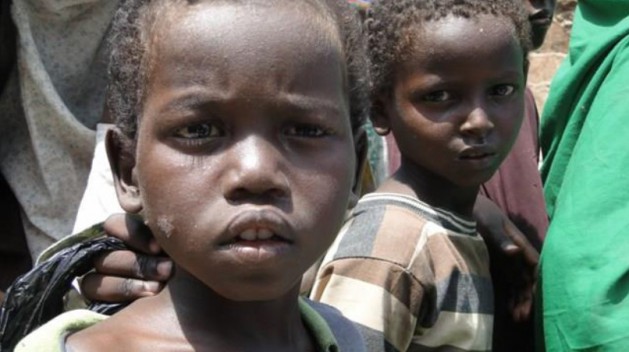 Children from families displaced by the drought line up to receive food at a feeding centre in Mogadishu. Credit: Abdurrahman Warsameh/IPS

ROME, Jun 13 2014 (IPS) - The Millennium Development Goals (MDGs) will expire in 2015 and be replaced with the Sustainable Development Goals (SDGs), which are intended to strengthen the international community’s engagement with eradicating poverty and hunger.

In the run-up to the drafting of the SDGs, the importance of food and nutrition security remains crucial. “In a world that produces enough food to feed everyone, there is no excuse for anyone to go hungry,” David Taylor, Economic Justice Policy Advisor for Oxfam International, told IPS.

Yet, the World Food Programme (WFP) estimates that there are still 842 million people who are under-nourished, representing one in eight globally.

While the first MDG “target of halving the percentage of people suffering from hunger by 2015 appears to be within reach, chronic hunger persists in many areas, particularly in sub-Saharan Africa, with marked disparities in progress,” Taylor remarked.

"In a world that produces enough food to feed everyone, there is no excuse for anyone to go hungry" – David Taylor, Economic Justice Policy Advisor for Oxfam International

For these reasons, he believes that “major challenges in food and agriculture remain” and, consequently, “the post-2015 agenda must chart a new pathway towards a target of zero hunger.”

The discussion surrounding the SDGs as a successor framework to the MDGs began in June 2012 at the Rio+20 Conference. Subsequently, in January 2013, “an Open Working Group (OWG) was established to steer the formulation of the proposal on SDGs,” Dorian Kalamvrezos Navarro, Food and Agriculture Organisation (FAO) Post-2015-SDGs coordinator, told IPS.

On 2 June, the OWG, made up of member states from all five continents, released the Zero Draft on SDGs with 17 proposed goals to be attained by 2030. The group is also supported by a U.N. System Technical Team, which comprises 40 U.N. entities.

Many of the targets of the OWG’s Zero Draft are welcomed by Oxfam, said Taylor, “including the target to end rather than merely reduce hunger, and the emphasis on supporting small-scale producers, women and other marginal groups.”

“If we’re to have an effective framework we need to identify applicable indicators. This is very challenging,” Jomo Kwame Sundaram, Assistant Director-General for Economic and Social Development and FAO lead for post-2015, told IPS.

Previously, critics such as Olivier de Schutter, U.N. Special Rapporteur on the Right to Food, have argued that the 18 targets of the MDGs had been decided on the basis of the most easily compiled data available, neglecting the deeper causes of poverty and hunger.

Sundaram pointed out that in drafting the SDGs, the international community needs to identify suitable goals and targets that are easy to measure, for which we have available data and, of course, that are meaningful.

“A welcome step forward is the inclusion of goals on reducing inequality and on climate change – and of course on food security,” Taylor noted.

This is especially important, he said, considering that “two major injustices continue to undermine the efforts of millions of people to escape poverty and hunger: inequality and climate change.”

But “as member states discuss the next drafts and refine the number of goals and targets, the goals on inequality and climate are at risk of being cut,” he told IPS.

While the MDGs have succeeded in mobilising public and political momentum in supporting development effects, the aim of the post-2015 agenda is to strongly amplify it, explained Navarro.

The challenge is important because the level of Overseas Development Aid (ODA) is plummeting. According to the Organisation for Economic Cooperation and Development (OECD), it fell by 4 percent in real terms in 2012, following a 2 percent fall in 2011.

Additionally, agricultural investment in developing countries has decreased dramatically over the last decades although it has been shown that it is positively correlated with food security and poverty reduction, according to FAO.

The intended shared responsibility of the SDGs could help keep the momentum going. “The MDGs were essentially targeted only at developing and least developed countries, while the SDGs will instead be universal, placed within a global agenda,” Navarro told IPS.

Amid criticism that the design process of the MDGs was not inclusive enough, a “more engaged participation by, and effective partnerships with, the full spectrum of relevant stakeholders has been underlined as a key element of the post-2015 framework,” said Navarro.

For instance, in an attempt to bridge the gaps between all stakeholders and favour global exchange and dialogue, “the United Nations Development Group (UNDG) organised a series of stakeholder consultations at national and regional levels as well as a set of 11 global thematic consultations,” Navarro told IPS.

This is key according to Manish Bapna, Managing Director of the World Resources Institute (WRI). Considering changing climate, rapidly increasing rates of urbanisation and changing demographics, the post-2015 agenda “must be a shared, universal [one] that leaves no one behind – one that elicits action from developed and developing countries, North and South,” Bapna told IPS.

As such, “food security is a perfect example of an area that can be universally relevant and a ‘triple win’ for [the post-2015 agenda] by integrating social, environmental and economic aspects,” he said.

Navarro explained further that “a new global partnership must emphasise triangular or South-South cooperation and focus on the exchange of good practices, institutional and otherwise,” in order to achieve worldwide food security.

An example of such a partnership is the Beyond 2015 coalition, of which Oxfam International is a member. Beyond 2015 is a global campaign mainly made up of civil society organisations from the North and the South that advocates a strong and legitimate post-2015 framework that is based on shared values, such as environmental sustainability, human rights, equity and global responsibility.

The U.N. Secretary-General is expected to report on the post-2015 agenda towards the end of 2014, taking into account the different contributions received throughout the process. The intergovernmental negotiations on the post-2015 development agenda, which will lead to a high-level Summit in September 2015, are expected to coincide with the unveiling of the final version of the SDGs.