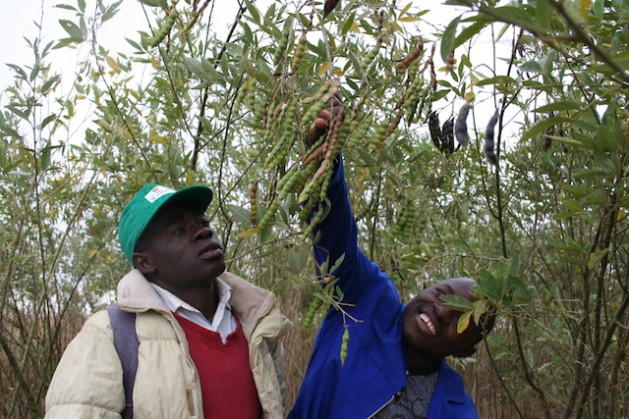 CHIMOIO, Mozambique, Sep 25 2014 (IPS) - Eherculano Thomas Rice, is pleased to have harvested 40 bags of white maize from his eight-hectare field in Chimoio, in Mozambique’s Manica Province. But he knows that his productivity and yield would be higher if he had been able to afford to buy fertiliser to add to his crop.

Rice grows cowpea to boost soil fertility in his field and improve his productivity, only buying fertiliser when he can afford it.

According to local NGO Farm Inputs Promotions Africa (FIPS), which works with about 38,000 farmers in five districts in Manica Province, a 50kg bag of fertiliser costs about 33 dollars. And a farmer will need three bags per hectare of land.

Africa is paying the price of low productivity because of limited use of commercial fertilisers by smallholder farmers who produce the bulk of the continent’s food.

“For now I intercrop my maize with pigeon pea, to increase soil fertility and it works. But fertiliser could boost my productivity,” Rice tells IPS, during a walk around his farm as he points to the mature pigeon pea plants.

“Farmers need awareness on how fertiliser can improve their production for them so that they can save and buy it easily. Farmers are discouraged by having to travel long distances to buy inputs, often a high cost.”

Low fertiliser use by smallholder farmers like Rice is a common narrative in sub-Saharan Africa — a continent which currently uses about eight kg/ha of fertiliser. It is a figure that pales against the global average of 93kg/ha and 100-200kg/ha in Asia, according to the Montpelier Panel’s 2013 report, Sustainable Intensification: A New Paradigm for African Agriculture.

Rice, who was trained by FIPS as a village inputs promotion agent, runs demonstration plots teaching farmers how to use improved inputs. Farmers are given input kits of improved seed and fertilisers as an incentive for them to buy them themselves.

Agriculture currently contributes about 25 percent of Mozambique’s GDP and a 2004 Ministry of Agriculture and Rural Development evaluation report indicates that improved seeds, fertilisers and pesticides are capable of raising productivity by up to 576 percent.

Charles Ogang, the president of the Uganda National Farmers Federation, tells IPS via email that food security in Africa is compromised because farmers are not using enough agricultural inputs, in particular fertilisers.

“There are many reasons why farmers in Africa are still hardly making a living of agriculture. One of them is the lack of access to key tools and knowledge,” Ogang says.

“Fertilisers are often not even available for purchase for farmers who live remotely. I believe that the lack of rural infrastructure, storage and blending facilities, the lack of credit and limited knowledge of farmers of how to use fertilisers are the key constraints for an increased use.”

“Although no country in sub-Saharan Africa has achieved this target, there are some signs of improvement in the implementation of the Abuja Declaration on Fertiliser by the countries and Regional Economic Communities since June 2006,” says Richard Mkandawire, vice president of the African Fertiliser and Agribusiness Partnership (AFAP). He says that Malawi has increased its fertiliser use from an average of 10kg/ha in the 90s, to a current 33kg/ha, and shows the commitment of countries to reach the target of 50kg/ha.

Mkandawire tells IPS that the partnership is undertaking technical research to advance appropriate soil management practices, including the facilitation of soil mapping. It is also testing soil to ensure that smallholder farmers are able to access fertiliser blends that are suitable for their land.

Mkandawire acknowledges that there is no silver bullet to lowering the cost of fertiliser for smallholder farmers. But he says AFAP has employed several types of financial mechanisms to help lower the cost. The mechanisms include facilitating guarantees to fertiliser distributors for retailer credit, financing assistance to importers or blenders to improve facilities, training, financial and technical assistance to warehouses at ports.

In August, AFAP in collaboration with the International Fertiliser Industry Association (IFA) launched a multi-media campaign in the Ethiopian capital, Addis Ababa, to push African governments to invest in agriculture productivity.

According to the campaign, African governments should ensure farmers have access to adequate and improved inputs especially fertiliser for agriculture transformation and economic development.

In June, African heads of state committed themselves to use agriculture growth to double food productivity, halve poverty and eliminate child under nutrition by 2025 when they came up with the Malabo Declaration following a meeting in Equatorial Guinea.

Charlotte Hebebrand, IFA director general, says Africa’s fertiliser demand is less than three percent of the global market. The continent’s production continues to be low and a significant share of the local production is exported as raw materials.

“Our estimates are that demand will increase over the course of the next three to five years in countries that are stable politically, committed to allocate at least 10 percent of their budget to agriculture, and those that have established sound fertiliser subsidy schemes,” Hebebrand tells IPS.

“Equipped with the right inputs and the knowledge to use these inputs, yields can increase tremendously. For every one kilogram of nutrient applied, farmers obtain five to 30 kg of additional product.”

Poor supply chains for fertilisers where farmers often have to travel long distances to buy a bag of fertiliser, are a primary cause of low fertiliser use in Africa. Poor farming practises are also worsening soil health in Africa.

An analysis of soil health in Africa by the Nairobi-based Alliance for a Green Revolution (AGRA) shows that croplands across sub-Saharan Africa lose 30 to 80 kgs per hectare of essential plant nutrients like phosphorous and nitrogen annually as a result of unsustainable farming practices, which the report warns will “kill Africa’s hopes for a food-secure future.”

AGRA’s Soil Health Programme is working on solving the problem by supporting an extensive network of partnerships in 13 countries in which three million farmers have been trained in using organic matter, applying small amounts of mineral fertilisers, and planting legume crops like cowpea, soybean and pigeon pea.