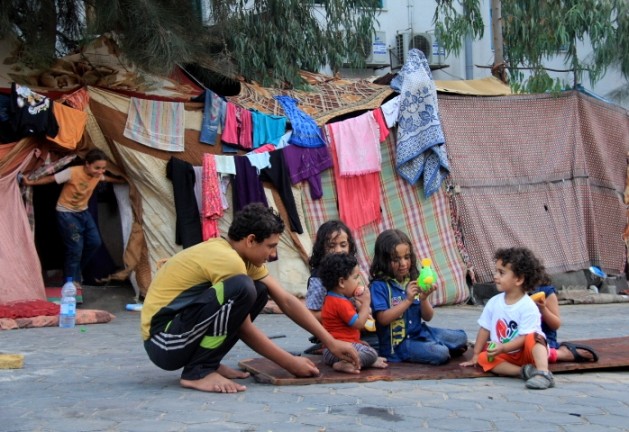 Members of Abu Sheira's family in front of the tent they set up in the grounds of Al-Shifa hospital, Gaza. Credit: Khaled Alashqar/IPS

GAZA CITY, Sep 8 2014 (IPS) - “When the [Israeli] shelling started, I gathered up my family and headed for what I though was a safe place, like a school, but then that became overcrowded and lacked sanitation, so we ended up in the grounds of the hospital.”

Islam Abu Sheira from Beit Hanoun, a city on the north-eastern edge of the Gaza Strip, was speaking to IPS in front of what has been his family’s makeshift ‘home’ at Al-Shifa Hospital in Gaza City for the last two months. His eyes misted over as he recalled his devastated home and his efforts to find a safe refuge for his family.

"I found no other safe place to shelter in but Al-Shifa Hospital. Together with our seven children we fled into the hospital grounds and slept our first night under trees to escape the Israeli missiles that were destroying whole areas, killing entire families" – Islam Abu Sheira, a refugee from Beit Hanoun, Gaza Strip

In his forties, Islam described his family’s ordeal after Israeli shelling left them homeless and they first sought refuge in a school run by UNRWA, the U.N. relief and development agency for Palestinian refugees, and were then forced by overcrowding and poor sanitary conditions to move out and seek shelter elsewhere.

“I found no other safe place to shelter in but Al-Shifa Hospital. Together with our seven children we fled into the hospital grounds and slept our first night under trees to escape the Israeli missiles that were destroying whole areas, killing entire families, ” said Islam,  adding that “during the war, the only thing we were looking for was a place that could protect us from the shelling.”

Like the majority of Palestinian families whose homes were destroyed, they have lost their belongings and, for the time being, their chances of living a life of dignity. Most families in the Gaza Strip were forced to leave their homes so quickly that they had no time to take anything with them.

“We simply have no livelihood and my children sleep every night on the ground without even a blanket to cover them,” lamented Islam. “We have been living a primitive life since we fled our home without even taking the clothes we need.”

As the numbers of people escaping the shelling mounted, so did the difficulty of sheltering them. Schools did their best, but there were insufficient basic necessities and medical supplies, and they were housing four or five persons, if not more, in each classroom. 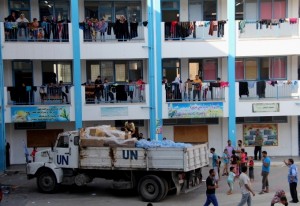 Palestinian families whose homes were destroyed by Israeli shelling of Gaza sheltering in a UNRWA school. Credit: Khaled Alashqar/IPS

Jamila Saad, a housewife who is taking care of her 12-member family and also fled to one of the UNRWA schools, told IPS: “The school was receiving more and more refugees, and we and the other refugee families were sharing one toilet. We need a better life for our children and we hope that our home will soon be rebuilt so that we can begin a new life there in our new home.”

The complex and harsh conditions that the Palestinian refugees are suffering in schools and other shelter centres has pushed most international organisations to provide the refugees with as much aid as possible, but this is far from finding a final solution for the refugees’ suffering.

The conditions of the thousands of refugees who have lost their homes has placed the new Palestinian government before an enormous challenge and a huge responsibility to provide these refugee families with care and a secure environment, as well take on the responsibility of implementing the reconstruction programmes financially aided by the European Union and donor states in accordance with ceasefire agreement brokered in Cairo between Israel and Hamas, especially in terms of the reconstruction of Gaza.

Mufid al-Hasayna, Minister of Public Works and Housing in the new Palestinian unity government, told IPS that “the amount of destruction of houses and economic facilities is massive, and the population of Gaza is living under hard conditions, so we are working hard to improve the living conditions of people. We are working on programmes to start reconstruction of the Gaza Strip and rebuild destroyed houses and

Al-Hasayna believes that the blurred vision Palestinians in the Gaza Strip have of their future after 50 days of war and their constant fear of being retargeted by the Israeli occupation forces have only added to a worsening of their situation.

Amjad Shawa, Director of the Palestinian NGO Network, told IPS: “The harsh circumstances that the Gaza Strip underwent over the 50 days of the Israeli occupation’s war reduced the population’s access to water and food and threatened people’s security, while the bombing of residential high ‘towers’ housing dozens of families has left serious impacts on civilians.

According to Shawa, the housing situation is now all the more dramatic because, even before Israel’s ‘Operation Protective Edge’, the Gaza Strip was already suffering from the deficit of 70,000 housing units that had been destroyed in the 2009 and 2012 wars.

“Following the two wars, scheduled housing projects to rebuild the infrastructure were not implemented, and the deficit of housing units has reached a state that has put the population in a situation of real disaster,” Shawa told IPS.

He called on the Palestinian Authority (PA) to form an independent body of Palestinian civil society organisations to create a plan for reconstruction of the Gaza Strip.

According to a report prepared by the Palestinian Central Bureau of Statistics (PCBS), in June 2014 the Gaza Strip was home to an estimated population of 1.76 million living in a coastal area that extends along the Mediterranean Sea and covers approximately 365 square kilometres with a maximum width of 12 kilometres.

The PCBS believes that Gaza Strip’s narrow surface area and high population has contributed to some extent to the distribution of people in large blocks and increased its population density, turning the Strip into one the most densely populated areas in the world.

Population density in the Gaza Strip has reached 2,744 per square kilometre, and experts say this means that food, health and education should be the top priorities for the future development agenda of decision-makers.