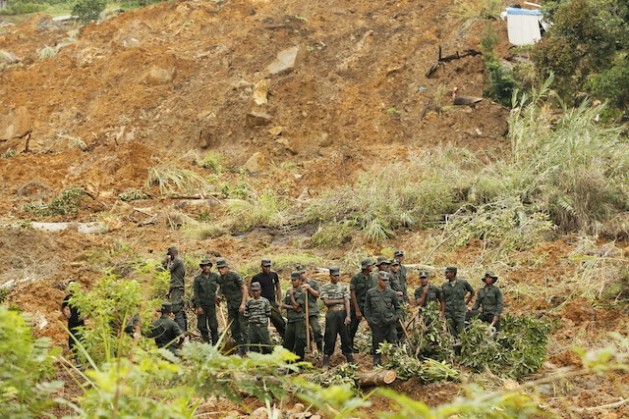 Soldiers wait for instructions before they begin search operations at the Meeriyabedda landslide site in central Sri Lanka. Credit: Contributor/IPS

COLOMBO, Nov 17 2014 (IPS) - Of the thousands of landslide-prone villages he has visited and worked with, R M S Bandara, a high-ranking official from Sri Lanka’s National Building Resources Organisation (NBRO), says only one has made him sit up and take note.

Keribathgala, located in the Ratnapura District about 120 km southeast of the capital, Colombo, is the only village out of thousands that keeps a regular tab on the rain gauge donated by the Disaster Management Ministry’s NBRO, the focal point for all landslide-related services in the country.

“It is the only village that calls us back to discuss the information they have and get advice from us. We have distributed thousands of rain gauges, and this has been the only interactive relationship,” Bandara, who heads the NBRO’s Landside Risk Research and Management Division, tells IPS.

“No one was looking at a rain gauge or other signs. People in these parts are more worried about where their next meal will come from.” -- B Mahendran, a resident of Meeriyabedda
The official said that most villages pay no heed to NBRO advice and training.

“A deadly landslide will occur maybe once every 10 years, so people don’t take notice of them or the dangers they pose,” he explains.

But such negligence can be deadly. On Oct. 29, at 7:15 in the morning, a large section of a hillside in the village of Meeriyabedda in the Badulla District, about 220 km from Colombo, caved in.

Two weeks later, when rescue workers finally gave up looking for victims, 12 bodies had been recovered and 25 were listed as missing.

This was a tragedy that could have been avoided, according to experts like Bandara. There had been two minor landslides in the village in 2005 and 2011. On both occasions the NBRO carried out surveys and recommended that the village be relocated.

In 2009 the NBRO carried out a large-scale community awareness programme that included conducting mock drills and handing a rain gauge over to the village. Bandara says another such programme was carried out last year as well.

All signs at Meeriyabedda prior to the landslide pointed to a disaster waiting to happen. Warnings for relocation had come as early as 2005 and the night before the disaster villagers were alerted to the possibility of a catastrophe. Very few moved out.

Though there is no evidence left of the reading on the rain gauge at Meeriyabedda, a similar device maintained by the NBRO at a nearby school indicated that at least 125 mm of rain had fallen overnight. That information, however, never reached the village.

“People really don’t pay attention to the equipment or the signs, partly [because] disasters don’t occur every day,” Bandara asserts, adding that despite the infrequency of natural hazards, daily vigilance is essential.

Testimony from villagers in Meeriyabedda supports his assessment.

“No one was looking at a rain gauge or other signs,” admits B Mahendran, a resident of the unhappy village. “People in these parts are more worried about where their next meal will come from.”

Villagers here travel 60 km daily to make a wage of about 400 rupees (a little over three dollars). Such hardships are not unusual in this region, home to many of Sri Lanka’s vast plantations. Government data indicate that poverty levels here are over twice the national average of 6.7 percent.

The literacy level in the estate sector is around 70 percent, roughly 20 percent below the national average, and U.N. data indicate that 10 percent of children living on plantations drop out of school before Grade Five, five times the national average dropout rate of just over two percent.

Most victims of this latest landslide were working at a sugarcane plantation about 30 km away, after they lost their jobs in nearby tea plantations, villagers tell IPS.

“Poverty here is a generational issue,” explains Arumugam Selvarani, who has worked as a child health official in Meeriyabedda since 2004. “Government and outside interventions are needed to lessen the impact.” She feels that the government needs to put in more effort to ensure the sector is linked to national planning and systems, and monitor such linkages continuously.

She herself has worked to improve nutrition levels among children for nearly a decade, but she believes that such efforts have “zero impact if they are ad-hoc and infrequent”.

Such initiatives need to be sustained over a long period of time in order to be really effective.

This is especially true in the arena of disaster preparedness, experts say, where government support is needed to keep early warning systems fine-tuned all year round, particularly in poverty-stricken areas where the fallout from natural disasters is always magnified by socio-economic factors like poor housing and food insecurity.

Sri Lanka has made some strides in this regard. Eight months after the 2004 Asian tsunami slammed the country’s coastal areas, the government established the Disaster Management Centre (DMC) to oversee preparedness levels around the island.

The 25 DMC district offices coordinate all alerts and evacuations with assistance from the police, the armed forces and the Sri Lanka Red Cross Society (SLRCS). In fact a village in the same district where the landslide occurred had a mock drill conducted by the DMC just six days before the disaster.

But DMC officials themselves admit there is an urgent need for a uniform country-wide disaster preparedness mechanism.

“Along the coast we are pretty prepared, because of all the work we have done since 2005, but we need such levels of action now to spread to the rest of the country,” says DMC spokesperson Sarath Lal Kumara.

NBRO’s Bandara has other ideas on how to strengthen disaster resilience. Effective utilisation of available data is topmost on his list. For instance, the NBRO has developed hazard maps for all 10 landslide-prone districts in the island. The map for the Badulla District, accessible online, clearly identifies Meeriyabedda as a high-risk area.

The problem is that no one is using this important information.

Bandara says these maps should form the basis of building codes and evacuation routes. Sadly, this is not the case.

DMC’s Kumara tells IPS that in a country comprising 65,000 sq km, land is at a premium and land management is a delicate issue. “There are so many overlapping concerns and agencies.”

He says it is not easy to follow each hazard map to the letter. The houses hit by the landslide, for instance, were built years before the maps were developed – relocating them would be a huge challenge, and efforts to do so sometimes run into resistance from the villagers themselves.

What experts and villagers can agree on is the need to have a dedicated government official overseeing disaster preparedness levels. Some experts suggest using the Divisional Secretariats, Sri Lanka’s lowest administrative units, to monitor their respective areas and feed into the DMC’s national network.

“All the drills, all the preparations will be useless unless there is an official or an office that is unambiguously tasked with coordinating such efforts in real time,” according to Indu Abeyratne, who heads SLRCS’s early warning systems.

In Meeriyabedda, such ambiguity cost three-dozen lives. Perhaps it is time to realign the system, to ensure that a trained official is present at the village level to carry information to the proper authorities.