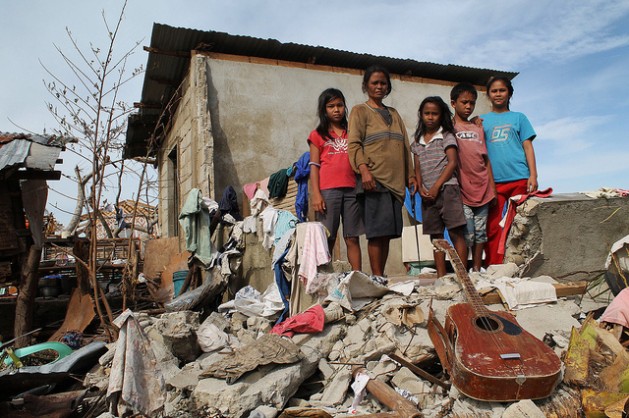 MANILA, Nov 10 2014 (IPS) - People covered their bodies with mud to protest against government ineptitude and abandonment; others lighted paper lanterns and candles and released white doves and balloons to remember the dead, offer thanks and pray for more strength to move on; while many trooped to a vast grave site with white crosses to lay flowers for those who died, and to cry one more time.

These were the scenes this past Saturday, Nov. 8, in Tacloban City in central Philippines, known as ground zero of Typhoon Haiyan.

One year after the storm flattened the city with 250-kph winds and seven-metre high storm surges that caused unimaginable damage to the city centre and its outlying areas and killed more than 6,500 people, hundreds remain unaccounted for.

Nov. 8 marked the first anniversary of Haiyan, known among Filipinos as Yolanda, the strongest storm ever to make landfall in recorded history.

Thousands of stories, mostly about loss, hopelessness, loneliness, hunger, disease, and deeper poverty flooded media portals in the Philippines. There were also abundant stories of heroism and demonstrations of extraordinary strength.

Understanding the scope of the disaster

"We have felt a year's worth of the government's vicious abandonment, corruption, deceit, and repression, and have seen a year's worth of news and studies that confirm this situation." -- Efleda Bautista, one of the leaders of People Surge, a group of typhoon survivors
There may be some signs that suggest a semblance of revival in Tacloban City, located about 580 km southeast of Manila, but it has yet to fully come back to life – that process could take six to eight years, possibly more, according to members of the international donor community.

Still, the anniversary was marked by praise for the Philippines’ “fast first-step recovery” from a disaster of this magnitude, compared with the experience of other disaster-hit places such as Aceh in Indonesia after the 2004 Asian tsunami that devastated several countries along the Indian Ocean.

“The ADB has been in the Philippines for 50 years, and we can say that other countries would not have responded this strongly to such a huge crisis,” ADB Vice President for East Asia and Southeast Asia Stephen Groff told a press conference last week.

Canadian Ambassador to the Philippines Neil Reeder echoed his words, adding, “The ability of the country to bounce back was faster than we’ve ever seen in other humanitarian disasters.”

“Yolanda was the largest and most powerful typhoon ever to hit land and it impacted a huge area, including some of the poorest regions in the Philippines. It is important that we look at the scale and scope of this disaster one year after Yolanda,” Groff stressed.

He said the typhoon affected 16 million people, or 3.4 million families, and damaged more than one million homes, 33 million coconut trees, 600,000 hectares of agricultural land, 248 transmission towers and over 1,200 public structures such as provincial, municipal and village halls and public markets.

Also damaged were 305 km of farm-to-market roads, 20,000 classrooms and over 400 health facilities such as hospitals and rural health stations.

In total, the storm affected more than 14.5 million people in 171 cities and municipalities in 44 provinces across nine regions. To date, more than four million people still remain homeless.

Philippine President Benigno Aquino III has faced criticism from affected residents, who used Saturday’s memorial to blast the government for its ineptitude in the recovery process.

Efleda Bautista, one of the leaders of People Surge, a group of typhoon survivors, told journalists, “We have felt a year’s worth of the government’s vicious abandonment, corruption, deceit, and repression, and have seen a year’s worth of news and studies that confirm this situation.”

Protesters burned a nine-foot effigy of the president on the day of the anniversary.

Early morning on Nov. 8 more than 5,000 people holding balloons, lanterns, and candles walked around Tacloban City in an act of mourning and remembrance.

The Roman Catholic Church declared the anniversary date as a national day of prayer as church bells pealed and sirens wailed at the start of a mass at the grave-site where nearly 3,000 people are buried.

Filipino netizens recalled that they cried nonstop while helplessly watching on their television and computer screens how Tacloban City was battered by the storm.

They posted and shared photos of Filipinos who were hailed as heroes because they volunteered to meet and drive survivors to their relatives in Manila and other places as they alighted from military rescue planes.

“Before” and “after” pictures of the area also made the rounds on the Web.

President Aquino in a visit to nearby affected Samar island before the storm anniversary said, “I would hope we can move even faster and I will push everybody to move even faster, but the sad reality is the scope of work we need to do can really not be done overnight. I want to do it correctly so that benefits are permanent.”

The Philippine government estimates the need for a 170-billion-peso (3.8-billion-dollar) master-plan to rebuild the affected communities, including the construction of a four-metre-high dike along the 27-km coastline to prevent further damage in case of another disaster.

Alfred Romualdez, the mayor of Tacloban City, told journalists two million people are still living in tents and only 1,422 households have been relocated to permanent shelters. As many as 205,500 survivors are still in need of permanent houses.

The recovery process was successful in erecting new electricity posts a few months after the storm, while black swaths of mud have now been replaced by greenery, with crops quickly replanted, and rice fields thriving once more.

Government, private, and international aid workers also restored sanitation and hygiene programmes in the aftermath of the storm.

The ADB announced it was trying to determine whether or not to provide a further 150 million dollars worth of official assistance to Yolanda survivors on top of the 900 million dollars already pledged in grants and concessions at the start of reconstruction efforts.

The United States’ Agency for International Development (USAID) is expected to provide a 10-million-dollar technical assistance plan to develop 18,400 projects across the country. These will cover other hard-hit areas outside of Tacloban City, such as Guian in Eastern Samar, which will also receive 10 million dollars from the United Arab Emirates (UAE) for rehabilitation programmes.

The Canadian government also offered 3.75 million Canadian dollars to restore livelihoods and access to water to the affected provinces of Leyte and Iloilo.

The Philippine government assured that the billions donated, offered and pledged by the international community would be safely accounted for, monitored, guarded and reported on with transparency.

Panfilo Lacson, a senator who was designated in charge of the rehabilitation programme, said that already he has confirmed reports that some bunkhouses in Tacloban and Eastern Samar were built with substandard materials and that someone had colluded with contractors for the use of substandard materials to generate kickbacks.

“That’s when I realised we have to monitor the funds,” he said.

He asked Filipinos to share information that they know about irregularities on the management and administration of the billions of pesos from the national coffers and donor organisations for rebuilding communities.