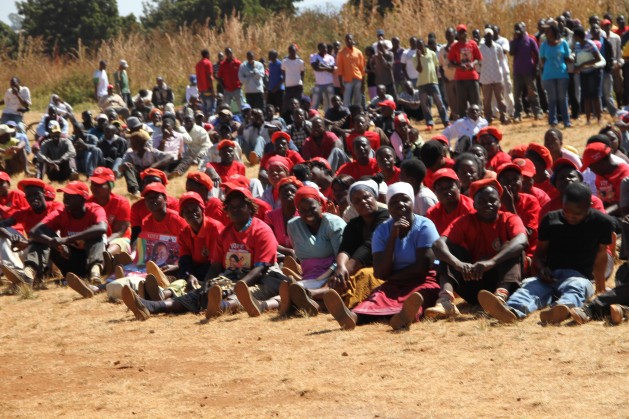 Supporters (wearing red) of the opposition Movement for Democratic Change led by Morgan Tsvangirai after witnessing their party losing to President Robert Mugabe in last year's elections. They now face another disappointment as the fight to succeed Mugabe turns attention away from development. Credit : Jeffrey Moyo/IPS

The eight MDGs targeted to be achieved by 31 December 2015 form a blueprint agreed to by all the world’s countries and the world’s leading development institutions.

“Every development area is at a standstill here as ZANU-PF politicians are scrambling to succeed the aged Mugabe here and they have apparently forgotten about all the MDGs that the country also needs to attain before the 2015 deadline” – Agrippa Chiwawa, an independent development expert

But, caught up in the succession fight among ruling party politicians as the country’s 90-year old President Robert Mugabe – who has ruled this Southern African nation for the last 34 years – reportedly  battles ill health ahead of the party’s elective congress in December, development experts say the Zimbabwean government has apparently shifted attention from development to party politics.

“Every development area is at a standstill here as Zanu-PF politicians are scrambling to succeed the aged Mugabe here and they have apparently forgotten about all the MDGs that the country also needs to attain before the 2015 deadline,” independent development expert Agrippa Chiwawa told IPS.

The battle to succeed Mugabe pits Justice Minister Emerson Mnangagwa and the country’s Vice-President Joice Mujuru, who is currently receiving a battering from the former’s faction which has won sympathy from the country’s first family, with First Lady Grace Mugabe venomously calling for the immediate resignation of Mujuru before the ZANU-PF congress.

Chiwawa told IPS that despite the government having contained recent strikes by medical doctors here through appeasing them by reviewing their salaries, the public health sector is in a state of decay amid acute shortages of treatment drugs.

Elmond Bandauko, an independent political analyst, agrees with Chiwawa. “Internal fights within the ZANU-PF party are stumbling blocks to national, social and economic prosperity; the ZANU-PF government is concentrating on its party succession battles as the economy is on its knees and there is no projected solution to the economic woes the country faces at the moment,” he told IPS. 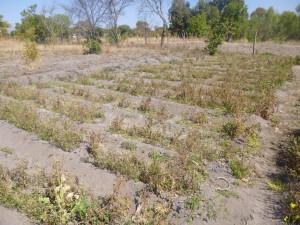 Fighting over who will succeed 90-year-old Robert Mugabe at the head of Zimbabwe’s ruling ZANU-PF party has relegated agriculture, like other development issues, to the side-lines if not outright neglect. Credit: Jeffrey Moyo/IPS

“Policy makers from the ZANU-PF government, who are supposed to be holding debates and parliamentary sessions and special meetings on how to move the country forward, are wasting time on political tiffs that do not save the interests of ordinary Zimbabweans,” Bandauko added.

Even the country’s education system has not been spared by the ruling party political milieu, according to educationists here.

“Nobody is talking about revamping the education system here as government officials responsible are busy consolidating their powers in the ruling party while national examinations are fast losing credibility amid leakages of exam papers before they are written, subsequently tarnishing the image of our country’s quality of education,” a top government official in the Ministry of Education told IPS on the condition of anonymity, fearing victimisation.

Even the country’s ordinary subsistence farmers, like Edson Ngulube from Masvingo Province in Mwenezi district, are feeling the pinch of the failure of politicians. “We can’t beat hunger and poverty without support from government with farming inputs,” Ngulube told IPS.

Yet for many Zimbabweans like Ngulube, reaching the MDGs offers the means to a better life – a life with access to adequate food and income.

Burdened with over half of its population starving, based on one of the U.N. MDGs, Zimbabwe nevertheless committed itself to eradicating hunger by 2015. But, with the Zanu-PF government deeply engrossed in tense power wrangles to succeed Mugabe, Zimbabwe may be way off the mark for reaching this target.

In addition, in September, the Food and Agriculture Organisation (FAO) sub-regional coordinator for Southern Africa, David Phiri went on record as saying that Zimbabwe could fail to meet the target to eradicating hunger by 2015 owing to conflict and natural disasters.

Zimbabwe’s 2012 National Census showed that more than two-thirds of Zimbabwe’s 13 million people live in rural areas and, according to the World Food Programme (WFP), this year about 25 percent of them need food aid or they will starve, and between now and 2015, 2.2 million Zimbabweans will need food support.

Zimbabwe’s Agriculture Minister Joseph Made is, however, confident the country is set to end hunger before the 2015 deadline. “We have land and we have hardworking people utilising land and for us there is no reason to doubt that by 2015 we would have eradicated hunger,” Made told IPS.

Claris Madhuku, director for the Platform for Youth Development (PYD), a democracy lobby group in Zimbabwe, perceive things rather differently.

“What actuates Zimbabwe’s failure to attaining MDGs is the on-going governance crisis, a result of the ruling ZANU-PF party’s internal wars to succeed the party’s nonagenarian President, which have not made development any easier,” Madhuku told IPS.

According to the PYD leader, in order for Zimbabwe to experience magnificent development, “the ruling party has to try and get its politics right.”

But with Zimbabwean President Mugabe apparently clinging to the helm of the country’s ruling party with renewed tenacity, it remains to be seen whether or not real development will ever touch the country’s soils.