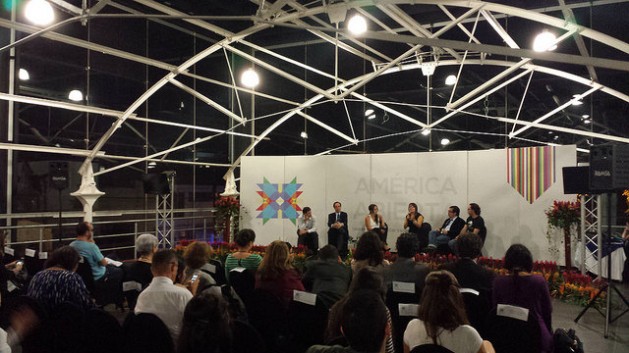 Latin American experts on transparency and open data participate in a debate during the Open Government Partnership Regional Meeting for the Americas, in the Costa Rican capital. Credit: Diego Arguedas Ortiz/IPS

That is the link that ties together open data and the transformation of society and that democratises access to rights and opportunities, said activists and government representatives working to democratise access to information and public records in the region.

During the Open Government Partnership Regional Meeting for the Americas, held Nov. 18-19 in San José, Costa Rica, experts in transparency referred over and over to a central idea: only empowered citizens can leverage information to create a better democracy.

“Simply opening up information never changed anyone’s reality, nor did it reduce the inequality gap,” Fabrizio Scrollini, lead researcher of the Open Data Initiative in Latin America, told IPS. “Just opening up access to information in and of itself doesn’t do that. Miracles don’t exist.”

What does happen, he said, “is that with a specific policy there is a set of parallel actions that can be major facilitators of these processes of empowerment of societies in the region.”

Scrollini said citizen participation makes it possible to turn a simple technological advance, such as a government platform or web site, into a tool for social change. Change is built from the grassroots level up, working with people, he said.

As an example, he cited the Uruguayan project Por mi Barrio (For My Neighbourhood), which enables the residents of the capital, Montevideo, to report problems in their community, from a pothole in the road or piles of garbage to a faulty street light, which are immediately received by the city government.

To that end, the municipal government allowed the developers of the project, a civil society group, access to its computer system for the first time.

“It brings the government closer to all segments of the population,” Fernando Uval told IPS. “We are holding workshops in different neighbourhoods, to inform people about how it works.”

“The emphasis is especially on those who have the least access to technology, so they can report problems in their neighbourhood and improve their living conditions,” said Uval, a Uruguayan who represents Open Data, Transparency and Access to Information (DATA), the organisation behind Por mi Barrio.

The key, experts say, lies in making open data and public policies on transparency a means to achieving social change, and not an end in themselves.

Moreover, if all information were open in real time, public policies and people’s response to social problems could be more effective.

“If government information were in a totally open format that would enable a political scientist to know where the inequality lies – through the GINI index, which measures it, for example – and to combine it with data related to economic or population growth, we could make better decisions,” Iris Palma told IPS.

Palma is the executive director of the non-governmental organisation DatosElSalvador, dedicated to securing the release of public information in that Central American country.

Open data is data that can be freely used, reused and redistributed by anyone – subject only, at most, to the requirement to attribute and sharealike – in easily managed formats.

For example, if an economist were to request information from a census, a digital version would be easier, to analyse the data using models and statistical programmes, instead of receiving them only in print.

The concept of open government stipulates that public administration should be transparent, provide easy access to information, be held accountable to the citizens, and integrate them in decision-making.

In the world’s most unequal region, governed by authoritarian regimes for decades, the concept of a participative government is relatively recent.

“We went from states and governments that operated on the basis of secrecy to a radical change, based on openness,” Scrollini said.

“That poses new challenges, because information should be used, and to be used, policies are needed to help people do so, and people need to be empowered,” he added.

Nevertheless, civil society in Latin America is forging ahead. For example, people in Mexico can find out how their tax money is used through the Open Budget programme.

In the region, the Latin American Network for Legislative Transparency brings together efforts to monitor the activities of the legislatures of nine countries in the region.

“With respect to the issue of open government, Latin America and the Caribbean are a step ahead, and are in the vanguard around the world,” said Alejandra Naser, an Economic Commission for Latin America (ECLAC) researcher who led a workshop on open government during this week’s regional meeting.

“It is precisely for that reason that we want to reinforce the movement with tools for decision-makers,” she added.

The challenge is how to get citizens involved in these processes.

Scrollini says technology cannot be the only route to achieve open data, and calls for a rethinking of traditional social input tools, such as community workshops or neighbourhood meetings, to figure out how people’s ideas can be incorporated into the design of these policies.

Other methods target key segments of the population, which could later foment greater use by other social sectors – from marathon sessions where the groups are invited to work with data to broader programmes with the users of the future.

“We actively work on ‘hackathons’ (an event in which computer programmers and others involved in software development collaborate intensively on software projects), to get journalists involved, because these reporters then foment the involvement of society at large,” said Cristina Zubillaga, assistant executive director of the National Agency for e-Government and Information Society, a Uruguayan government agency.

At the same time, she said, “we work with academia to train students in data management.”

International development aid, meanwhile, the big source of financing for these programmes in the region, underlines that it is essential to support civil society groups that already have some experience and can serve as spearheads.

“We support organisations that can translate information into easily understood terms, showing people that they can get involved and that the availability of information affects and involves them,” Ana Sofía Ruiz, an official with the Dutch development organisation HIVOS’ Central America programme, told IPS.

“We are trying to draw people in, to get them involved in this,” said the representative of HIVOS, which has financed projects like Ojo al Voto, a Costa Rican initiative that provided independent information during this year’s presidential and legislative elections.

Ojo al Voto wants to help provide oversight of the work of the Costa Rican parliament.