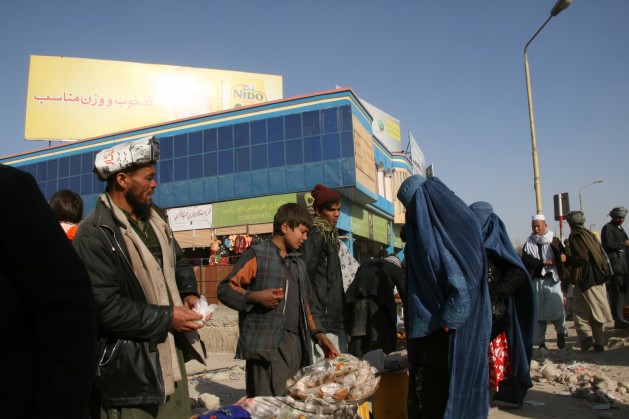 Peddlers in Mazar-e-Sharif, Balkh province, North Afghanistan. Concern is being expressed in Afghanistan about the country’s future after Western disengagement. Credit: Giuliano Battiston/IPS

KABUL, Dec 11 2014 (IPS) - The U.S./NATO International Security Assistance Force Joint Command lowered its flag for the last time in Afghanistan on Dec. 8, after 13 years. The ISAF mission officially ends on Dec. 31, and will be replaced on Jan. 1, 2015 by “Resolute Support”, a new, narrow-mandate mission to train, advise and assist the Afghan National Security Forces.

However, despite U.S. Secretary of State John Kerry’s recently pledged continuing assistance for years to come,here in Kabul many fear that donor interest in the country may now start waning and that Afghanistan will likely drop out of the spotlight because history has already shown that, when troops pull out of a country, funds tend to follow.

“We are very concerned about the Western financial disengagement. The country is still fragile, thus we believe that the international community should be committed over the whole ‘Transformation Decade’, spanning from 2015 to 2024, until the country is able to stand on its own,” Mir Ahmad Joyenda, a leading civil society actor and Deputy Director of the Afghanistan Research and Evaluation Unit (AREU), told IPS.

“We are very concerned about the Western financial disengagement. The country is still fragile, thus we believe that the international community should be committed over the whole 'Transformation Decade’, spanning from 2015 to 2024, until the country is able to stand on its own” – Mir Ahmad Joyenda, Deputy Director of Afghanistan Research and Evaluation Unit

Afghanistan’s gross domestic product (GDP) increased more than four-fold between 2003 and 2012, but economic growth was largely driven by international investments and aid.

Since the U.S.-led military intervention of 2001, Afghanistan has been the focus of large international aid and security investments, being the world’s leading recipient of development assistance since 2007, Lydia Poole notes in Afghanistan Beyond 2014. Aid and the Transformation Decade, a briefing paper prepared for the Global Humanitarian Assistance (GHA) programme which provides data and analysis on humanitarian financing and related aid flows.

On Dec. 4, delegations from 59 countries and several international organisations gathered for the ‘London Conference on Afghanistan’, co-hosted by the governments of the United Kingdom and Afghanistan, to reaffirm donor humanitarian and development commitments to the war-torn country.

The London Conference served as a follow up to the Tokyo Conference on Afghanistan in 2012, where the international community pledged 16 billion dollars to support Afghanistan’s civilian development financing needs through 2015, based on an agreement known as the Tokyo Mutual Accountability Framework (TMAF).

In London, the international community reaffirmed its Tokyo commitment and the vague willingness to “support, through 2017, at or near the levels of the past decade”.

However, the London Conference “produced no new pledges of increased aid, so the drop in domestic revenues to 8.7 percent of gross domestic product, down from a peak of 11.6 percent in 2011, leaves Afghanistan with a severe and growing fiscal gap”, John F. Sopko, Special Inspector General for Afghanistan Reconstruction, remarked in a meeting at the Carnegie Endowment for International Peace.

With the imminent withdrawal of NATO troops, the Afghan economy is already under strain, “We estimate that growth has fallen sharply to 1.5 percent in 2014 from an average of 9 percent during the previous decade”, Sri Mulyani Indrawati, Managing Director of the World Bank, stated on Dec. 4 in London.

Furthermore, many indicators from the 2015 Afghanistan Humanitarian Needs Overview Report of the U.N. Office for the Coordination of Humanitarian Affairs (OCHA) show that there is still a considerable humanitarian emergency: “1.2 million children are acutely malnourished; approximately 2.2 million Afghans are considered very severely food insecure; food insecurity affects nearly 8 million people with an additional 2.4 million classified as severe, and 3.1 million are moderately food insecure.”

Despite the many risks associated with Western disengagement, Joyenda prefers to emphasise the opportunities, advocating a fundamental shift of attitude: “The international community should use this opportunity to have a rebalancing of priorities: ‘less money for security and weapons, more money for civilian cooperation and reconstruction’,” he told IPS.

Since 2011, the primary focus of international expenditure in Afghanistan has been overwhelmingly security. When international troop levels were at their peak at 132,000 in 2011, “spending on the two international military operations – the NATO-led International Security Assistance Force (ISAF) and U.S.-led Operation Enduring Freedom (OEF) – reached 129 billion dollars, compared with 6.8 billion dollars in ODA, of which 768 million dollars was humanitarian assistance”, writes Poole.

“We also need a proper alignment of funds with the State’s economic planning,” Nargis Nehan, Executive Director and founder of Equality for Peace and Democracy, a non-governmental organisation advocating equal rights for all Afghan citizens, told IPS.

According to Nehan, “the international community made the State a less legitimate actor through the creation of parallel structures. Millions of dollars for example have been directed to development and humanitarian projects via the Provincial Reconstruction Teams”, which consisted of a mix of military, development and civilian components, conflating development/humanitarian aid with the agendas of foreign political and security actors.

“The political framework was never adequate,” Thomas Ruttig, co-director and co-founder of the Kabul-based Afghanistan Analysts Network, told IPS. “Over the past few years the international community was busier – at least at the government level – with preparing the withdrawal and designing a positive narrative, rather than with the Afghans left behind.”

“Afghanistan has been a rentier-State for one hundred and fifty years, and will be dependent on external support for quite a while. In this phase we have to lighten the country’s donor dependency, we cannot just walk away. We have the political responsibility to keep to our commitments,” he noted.