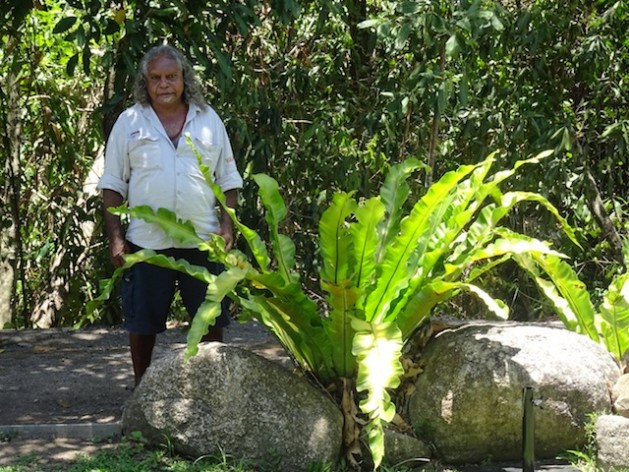 Roy Roger Gibson, an indigenous Kuku Yalanji elder, had to wait 20 years for his dream of being part of a native-owned sustainable ecotourism venture to become a reality. Credit: Neena Bhandari/IPS

MOSSMAN, Queensland, Australia, Jan 26 2015 (IPS) - Roy Roger Gibson, an indigenous Kuku Yalanji elder, would watch thousands of tourists and vehicles trampling his pristine land while working on the sugarcane fields in Far North Queensland. His people were suffering and their culture was being eroded. The native wildlife was disappearing. He dreamt of turning this around.

It took 20 years to bring his vision to fruition, but today the Mossman Gorge Centre is a successful indigenous ecotourism business in the world heritage-listed Daintree National Park in Queensland, Australia.

Indigenous people are three times less likely to own and run their own business than non-indigenous people.
With more people travelling the world and seeking authentic experiences, tourism has acted as a catalyst for preserving indigenous culture, providing employment, education and training opportunities and protecting the environment – especially in remote locations such as the Mossman Gorge, the ancestral home of the Kuku Yalanji people in the southern tip of the Daintree National Park.

Roy and the Mossman Gorge Aboriginal Community worked in collaboration with the Indigenous Land Corporation (ILC), to build the Centre, which has a 90-percent indigenous workforce – 61 employees and 21 trainees.

Roberta Stanley, 18, who joined the Centre as a trainee along with her twin sibling, says, “Every morning, when I step out of home in my work uniform, I can’t stop smiling. It has helped me reconnect with our history, legends, languages, music and the arts. I feel a sense of immense pride and have the confidence to pursue my dream of becoming an artist and dancer.”

This was something young people like her couldn’t do before the Centre began providing accredited skills training in tourism, hospitality, retail and administration. Both her parents also work at the Centre. With four members of the Stanley family employed, it has made life easier.

In 2011, an estimated 207,600 indigenous people were in the labour force. About two in five (42 percent) Aboriginal and Torres Strait Islander people aged 15 years and over were employed, compared with about three in five non-indigenous people (61 percent).

With limited employment opportunities, pursuing their dreams is not something every native Australian is free to do.

Pamela Salt, 41, used to be a cleaner and paint in colours representing the rainforest and sea during her spare time. Since she began working at the Mossman Gorge Centre, she feels a sense of ownership with the place.

“Physically, mentally and emotionally, it has given our people the confidence that we can do it. One of my daughters is also employed here,” Pamela told IPS. A self-taught artist with no formal training, today her work is on display in the Centre’s gallery and bought by national and international visitors.

Since July last year, 250,000 tourists, 40 percent of them international, have visited the Centre. As Mossman Gorge Centre’s General Manager Greg Erwin told IPS, “Indigenous tourism is gaining momentum. It will add a cultural depth to the experiences that visitors have in any destination. The Kuku Yalanji people, like other Aboriginal communities, have been nurturing and looking after the environment for thousands of years. It is their supermarket and their pharmacy.” 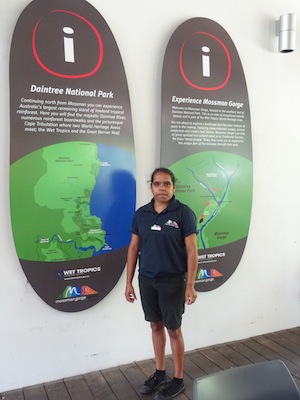 Eighteen-year-old Roberta Stanley joined the Mossman Gorge Centre as a trainee. Now she, along with four other members of her family, works there full time. Credit: Neena Bhandari/IPS

In the next 10 to 15 years, the business will be totally owned by the aboriginal people of the Gorge – a long way from the ‘Stolen Generation’: the tens of thousands of children who were forcibly removed from their families between 1900 and 1970 under Australian government assimilation policies to “breed out” their Aborigine blood and supposedly give them a better life.

Roy, 58, who also belongs to the ‘Stolen Generation’, doesn’t want his people to ever experience that psychological trauma again.

“This Centre is a role model for our younger generation dreaming of a better life.” He, along with other indigenous guides, takes visitors on “dreamtime walks” highlighting the nuances of the world’s oldest rainforest, relating stories spun around creation, food sources, flora and fauna, the caves and Manjal Dimbi (Mt. Demi), a mountain with spiritual significance for the indigenous people.

“Now we are able to protect our ecosystem and at the same time provide visitors an insight into the lives, culture and beliefs of the Kuku Yalanji people and their connection to the natural environment. Our emphasis is on sustainability,” Roy told IPS.

Sustainable indigenous businesses like the Mossman Gorge Centre are not only helping protect and preserve the ecosystem, but lifting out of poverty some of the most disadvantaged communities that suffer from alcohol abuse, domestic violence, chronic diseases, unemployment and high suicide rates.

Meanwhile, indigenous women are hospitalised for family violence-related assaults at 31 times the rate of non-indigenous women, according to the 2014 Social Justice and Native Title Report.

ILC subsidiary, Voyages Indigenous Tourism Australia, offers unique experiences in iconic locations around Australia. Besides the Mossman Gorge Centre, it manages the Ayers Rock Resort and Longitude 131° in the Northern Territory, Home Valley Station in The Kimberley in Western Australia.

As IBA’s CEO Chris Fry said, “Our Business Development and Assistance Programme (BDAP) assists indigenous entrepreneurs to start and grow their own enterprises, and indigenous-owned businesses to be strong employers of indigenous peoples.”

Jo Donovan, a beneficiary of the programme, turned her hobby into a business after attending IBA’s BDAP. She formed Bandu Catering with her son Aaron Devine and daughter Jessica, both chefs. Bandu (‘food’ in the Dhanggati language) provides quality food, blending native ingredients and flavours with innovative, contemporary Australian cuisine.

The BDAP, which has partnered with the banking sector, has provided over 90 loans valued at 55 million dollars during the last financial year.

“Our Aboriginal and Torres Strait Islander partners currently hold more than 68 million dollars in equity across a range of commercial businesses and assets through IBA’s Equity and Investment Programme and the IBA purchased over 2.4 million dollars [of] goods and services from approximately 30 indigenous businesses,” Fry told IPS.

As the international community prepares for a new era of development, one that puts sustainability at the heart of poverty-eradication, initiatives like these can provide a blueprint for inclusive and equal growth.