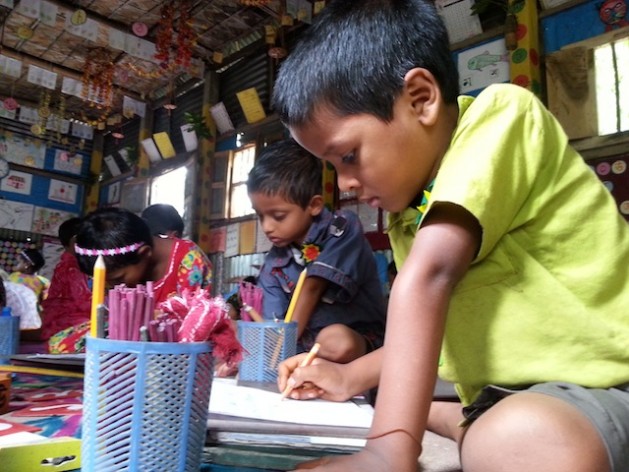 In the remote Mohonpur village, home to just 140 families, children are benefitting from a free preschool founded by a development NGO that promotes early childhood education in rural Bangladesh. Credit: Mahmuddun Rashed Manik/IPS

JAMALPUR, Bangladesh, Feb 4 2015 (IPS) - Shanta* is only four years old, but already she loves school. Every morning, her mother walks her to the small pre-primary facility in Mohonpur village, about 140 km away from Bangladesh’s capital Dhaka, and leaves her in the care of a young female teacher, who oversees the day’s activities: storytelling, drama, reciting poetry.

The little girl’s mother, Mosammet Laily Begum, is a housewife of humble means. She and her husband, a rickshaw puller who earns about 100 dollars each month carting passengers back and forth, live in a thatched-roof home. They grow vegetables in the garden to supplement their income, and between them only just manage to scrape together the funds to feed and clothe their three kids.

Bangladesh has made huge strides in improving education in the last two decades. It currently has one of the largest primary schooling systems in the world, with an estimated 20 million pupils between the ages of six and 10 years old, along with some 365,000 teachers working in over 82,000 schools.
Education is a luxury, one that – in a different time and place – they would have had to forego in favour of life’s necessities.

But the preschool located close to their home is free. Before Shanta, Laily’s two older children also passed through these classrooms, where they learned the alphabet in both English and Bangla. They have gone on to do very well in elementary school. She credits their love of lessons to the foundation they received here in Mohonpur.

“My daughter now plays with nothing but her school books at home,” Laily tells IPS. “She would rather do that than play with other children in the neighbourhood.”

This family is lucky; unlike scores of others across rural Bangladesh who have no access to preschool facilities, they live within walking distance of one of the several thousand schools run by BRAC, one of the world’s largest development organisations that focuses on early education for kids between the ages of three and five.

Laily knows that her children could easily have fallen into the same category as the 3.3 million ‘out-of-school’ youth in Bangladesh. Until 2012, the government offered no options for families like hers, that couldn’t afford private preschooling.

This meant that the roughly 45 million Bangladeshis who subsist on less than 1.25 dollars a day had little chance of preparing their offspring for mainstream education.

This fueled a vicious cycle: poorer children who couldn’t get a head start lagged behind their more privileged peers, with inequities continuing on into the secondary and tertiary levels.

Many of these disadvantaged youth make up the bulk of Bangladesh’s unemployed, who constitute some 4.5 percent of the population of 156 million people.

Organisations like BRAC have attempted to level this uneven playing field.

With 12,450 pre-primary schools across the country, which provide schooling for nearly 360,000 students each year, the BRAC (Pre-Primary) Education Programme (BEP) is the largest free preschool programme in the country.

Altogether, over 5.2 million kids have benefited from these facilities since BRAC first rolled out the initiative in 1997.

Easing the transition into mainstream schooling

Standing inside the small tin shed that serves as her classroom, 27-year-old Rowshanara Begum is in her element. She handles a group of 30 kids, 18 of them girls – a 50-percent female enrolment rate being a top priority for BRAC – and she knows she is making a difference.

For two-and-a-half hours a day, six days a week, she painstakingly takes her charges through the alphabet, peppering the tedious process with drawings, nursery rhyme recitals and games. The flexible, informal structure keeps families coming back for more.

“There is tremendous pressure from parents to open another such free school for the children here in Mohonpur village,” she tells IPS. 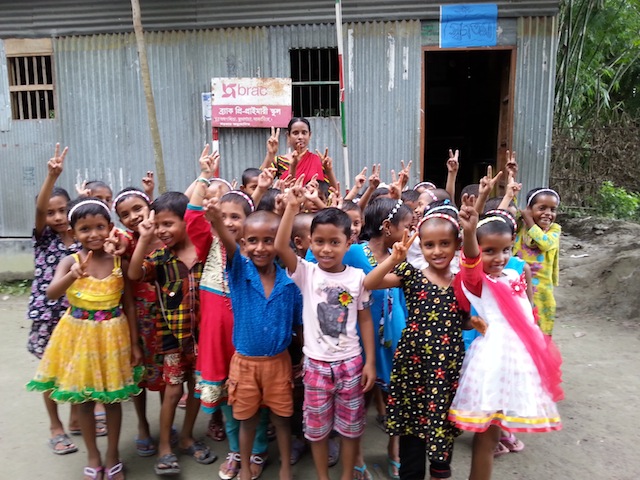 Poor families can seldom afford the cost of private preschooling. They rely on free education provided by NGOs like BRAC to give their children a leg-up in life. Credit: Mahmuddun Rashed Manik/IPS

Teachers are trained to nurture a child’s creativity, which in turn encourages better communication, language and social skills. Equal emphasis is placed on improving motor ability, using exercises such as free-hand drawing and painting.

In short, the whole curriculum is geared towards easing the transition into the public education system.

This is no small undertaking in a country where the average child takes 8.6 years to complete the five-year primary school cycle. The United Nations Children’s Fund (UNICEF) chalks this up to low standards in public institutions, and the fact that 24 percent of all teachers in government-run or registered non-government schools are untrained.

The NGO has a lot to show for its efforts. A senior BRAC official who did not wish to be named stated that they have achieved a “remarkable” transfer rate of students from preschool into primary school, touching 99.14 percent.

Still, this is only half the battle won.

Bangladesh has made huge strides in improving education in the last two decades. It currently has one of the largest primary schooling systems in the world, with an estimated 20 million pupils between the ages of six and 10 years old, along with some 365,000 teachers working in over 82,000 schools.

Since 1990, it has raised its enrolment rate from 72 to 97 percent and its completion rate from 40 to 79 percent. The number of primary schools receiving free textbooks has increased from 32 percent in 2010 to over 90 percent in 2014.

According to Rasheda K Choudhury, executive director of the Campaign for Popular Education (CAMPE) – a network comprised of over 1,000 NGOs working on education issues – Bangladesh has also lowered the dropout rate from 33 percent just a few years ago to 20 percent in 2014.

“Improved teacher trainings, a narrower gap in the student-teacher ratio [which now averages 49:1, compared to 67:1 in 2005], and provisions for stipends for students are among the reasons for its success,” she told IPS.

But there are gaping holes that need to be filled. Policy makers insist that the current allocation of 2.5 percent of the country’s gross domestic product (GDP) on the education sector must be upped to at least four percent in order to truly provide high-quality education for all.

Much work also needs to be done to improve access for the 71 percent of the population living in rural areas, as well as for indigenous communities who dwell in the country’s remote hill districts and residents of ‘chars’ – little islands formed from sedimentation that dot the country’s largest rivers.

According to Johannes Zutt, the World Bank’s country director for Bangladesh, the government is reaching out to those left behind by educational reform, “including slum dwellers, working children, indigenous children and children with disabilities.”

But unless programmes’s like BRAC’s BEP are rolled out on a massive scale all around the country, Bangladesh will continue to nurse a patchy educational track record, and the goal of universal primary education will remain out of reach.