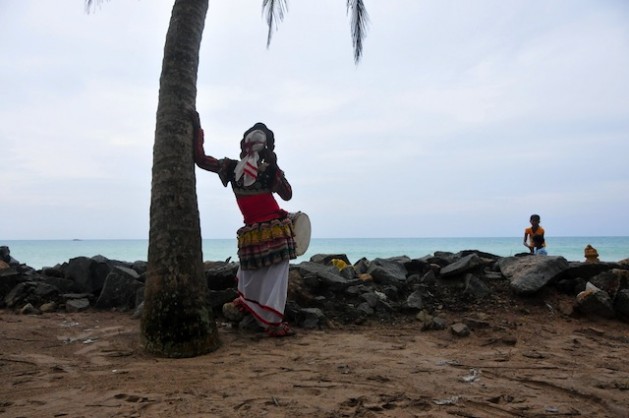 For most Sri Lankans seeking asylum in Australia, there is no pot of gold at the end of the rainbow, just a sad return journey home. Credit: Amantha Perera/IPS

COLOMBO, Feb 25 2015 (IPS) - Weerasinghearachilage Ruwan Rangana had it all planned out last year in September: the big break that would change his life and those of his extended family had finally arrived.

The Sri Lankan youth in his early twenties was not too worried that the arrangement meant he had to make a clandestine journey in the middle of the night to a beach, board a two-decade-old trawler with dozens of others and be ready to spend up to three weeks on the high seas in a vessel designed to carry loads of fish.

“Besides trade and security, a large driver of the Australian government’s foreign policy is its single-minded focus on ensuring that all asylum seekers or refugees are processed at offshore facilities." -- Human Rights Watch
He and his fellow commuters prayed that the boat would not crack in two before it reached Australian waters, where they all expected to find a pot of gold at the end of the proverbial rainbow.

Rangana told IPS that most of the roughly three-dozen people on board were leaving in search of better economic prospects, though members of the minority Tamil community are known to take the same journey to escape political persecution.

The boat ride was the relatively easy part. After reaching Australia, Rangana would have to seek asylum, land a job and secure an income, before beginning the process of bringing his family there to join him.

“At least, that was the plan,” said the young man who was a contract employee of the state-owned Ceylon Transport Board in the remote village of Angunakolapelessa in Sri Lanka’s southern Hambantota District earning a monthly salary of 12,000 rupees (about 90 dollars) when he took the boat ride.

Half of the plan – the life-threatening part – worked. The other part – the life-changing one – did not.

Despite a leaking hull, the vessel did reach Australian waters, but was apprehended by the Australian Navy, newly emboldened by a policy to turn back boatloads of asylum seekers after fast-tracked processing at sea, sometimes reportedly involving no more than a single phone call with a border official.

By mid-September Rangana was back in Sri Lanka, at the southern port city of Galle where he and dozens of others who were handed over to Sri Lankan authorities were facing court action.

Thankfully he did not have to spend days inside a police cell or weeks in prison. He was bailed out on 5,000 rupees (about 45 dollars), a stiff sum for his family who barely make 40,000 rupees (about 300 dollars) a month.

Now he sits at home with no job and no savings – having sunk about 200,000 rupees (1,500 dollars) into his spot on the rickety fishing boat – and makes ends meet by doing odd jobs.

“Life is hard, but maybe I can get to Australia some day. I did get to the territorial waters; does that mean I have some kind of legal right to seek citizenship there?” he asks, oblivious to the tough policies of the Australian administration towards immigrants like himself.

Clamping down on ‘illegal’ entry

Since Australia launched Operation Sovereign Borders in September 2013 following the election of Tony Abbott as Prime Minister, at least 15 boats have been turned back at sea, including the one on which Rangana was traveling, to Indonesia and Sri Lanka.

Last year only one boat reached Australia, according to the government.

The programme has resulted in a significant drop in the number of illegal maritime arrivals in Australia. Compared to the one boat that reached Australia in 2014, the 2012-2013 period saw 25,173 persons reaching the country safely.

In the 10 months prior to the controversial military programme, 281 unauthorized boats arrived with a total of 19,578 people on board, according to the Australian Department of Immigration.

Just this past week, Australian authorities interviewed four Sri Lankans at sea, and sent them back to the island. Officials claim that the new screening process saves lives and assures that Australian asylum policies are not abused.

“The Coalition government’s policies and resolve are stopping illegal boat arrivals and are restoring integrity to Australia’s borders and immigration programme. Anyone attempting to enter Australia illegally by sea will never be resettled in this country,” Immigration Minister Peter Dutton’s office said in a statement this week.

As of end-January, there were 2,298 persons in immigration detention facilities in Australia, of whom 8.1 percent were Sri Lankans.

The policy has been criticised by activists as well as rights groups, including by the office of the United Nations High Commissioner for Refugees (UNHCR).

“UNHCR’s position is that they (asylum seekers) must be swiftly and individually screened, in a process which they understand and in which they are able to explain their needs. Such screening is best carried out on land, given safety concerns and other limitations of doing so at sea,” the agency said in a statement earlier this month.

According to the international watchdog Human Rights Watch, “Besides trade and security, a large driver of the Australian government’s foreign policy is its single-minded focus on ensuring that all asylum seekers or refugees are processed at offshore facilities.

“The government has muted its criticism of authoritarian governments in Sri Lanka and Cambodia in recent years, apparently in hopes of winning the support of such governments for its refugee policies,” the rights group added in a statement released last month.

The end of Sri Lanka’s 26-year-long civil conflict and the election of a new, possibly more democratic government in January this year add to Canberra’s justification for turning away those who seek shelter within its borders.

In reality, the risk for asylum seekers is still high. Newly appointed Minister of Justice Wijeyadasa Rajapakshe told IPS that the government was yet to discuss any changes to accepting returnees. “They will face legal action; change in such a policy is not a priority right now,” he added.

Lawyers working with asylum seekers say their clients are unlikely to face extended jail terms, but could be slapped with fines of up to 100,000 rupees (750 dollars), still a lot of money for poor families.

Even if the legal process is swift, and those impounded are able to post bail, their reasons for wanting to leave remain the same.

Take the case of Kanan*, a young man from the war-torn northern town of Kilinochchi. He took a boat in August 2013 after paying a 750-dollar fee, agreeing to pay the remaining 6,750 dollars once he reached Australia.

He never even made it halfway. Six days into the journey, the boat broke down and was towed ashore by the Sri Lankan Navy.

He was fleeing poverty – his home district boasts unemployment rates over twice the national figure of four percent – and possible political persecution, not an unusual occurrence among the Tamil community both during and after Sri Lanka’s civil war.

He knows that very few have gotten to the Australian mainland and that even those whose cases have been deemed legitimate could end up in the Pacific islands of Nauru or Papua New Guinea.

But Kanan still hopes to give his ‘boat dream’ another try. “There is no hope here; even risking death [to reach Australia] is worth it,” says the unemployed youth.