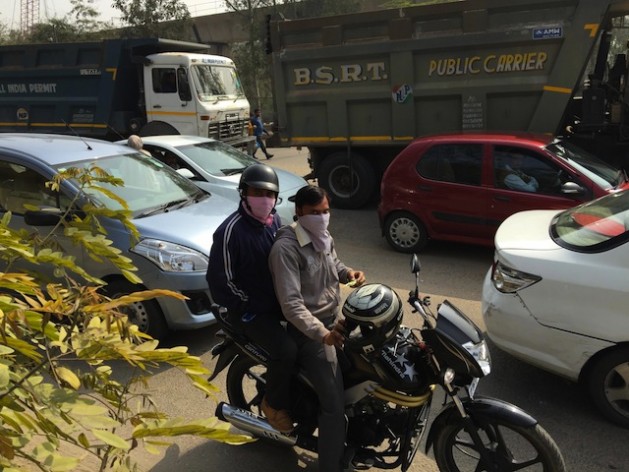 Vehicle ownership in India is projected to hit 400 million by 2040 from the current 170 million, which could prompt a five-fold increase in poisonous gases emitted by cars and trucks. Credit: Neeta Lal/IPS

NEW DELHI, Feb 25 2015 (IPS) - Like many others of her age, 15-year-old Aastha Sharma, a Class 10 student at a private school in India’s capital, New Delhi, loves being outdoors, going for walks with her friends and enjoying an occasional ice-cream. But the young girl can’t indulge in any of these activities.

An estimated 1.5 million people die annually in India due to indoor and outdoor air pollution.
For the past three years, Sharma’s life has been a whirligig of doctors’ prescriptions, missed social outings and a restricted diet that does not include most of her favourite foods. Along with books and a lunchbox, she also packs a nebulizer in her satchel daily to ward off the wheezing attacks that she has now come to dread.

“I’m sick of the endless do’s and don’ts I have to follow. When will I be able to lead a free life?” the teen wonders.

Many other youngsters in Delhi are asking the very same question as they grapple with the effects of rampant air pollution in this city of 18 million, believed to be world’s most polluted.

Greenpeace India, an environmental NGO, recently released findings of its air quality monitoring survey highlighting how poor the air was inside five prominent schools in the capital.

“Air pollution levels inside Delhi’s schools are alarmingly high and children are consistently breathing bad air. The new government needs to acknowledge the severity of air pollution in the city,” said Aishwarya Madineni, a campaigner with Greenpeace.

Another study conducted in 2014, which monitored 11,628 school-going children from 36 schools in Delhi in different seasons, found that every third child in the city had reduced lung function because of particulate pollution.

In a report submitted last year to the Supreme Court, the country’s Environment Pollution (Prevention and Control) Authority urged the apex court to order all schools in Delhi to shut down on days when air pollution levels posed a threat to public health.

Studies by the United States’ Environmental Protection Agency (EPA) point out that when children are exposed to particulate matter – a complex mixture of acids (nitrates and sulfates), organic chemicals, metals, and soil or dust particles – of 2.5 micrometers, it can trigger a raft of deadly respiratory illnesses.

The International Agency for Research on Cancer (IARC) classified particulate matter pollution as carcinogenic to humans in 2013 and designated it as a “leading environmental cause of cancer deaths.”

Mothers’ exposure to pollution for prolonged periods, adds the specialist, can lead to malformation of organs in newborns.

“[Particulate Matter] of less than 10 micrometers in diameter (PM 10) is particularly insidious as it gets lodged deep inside the lungs and penetrates the bloodstream, heightening a person’s vulnerability to cancer and heart disease,” she explains.

India’s high levels of air pollution, ranked by the WHO as being among the worst in the world, are adversely impacting the life spans of its citizens, reducing most Indian lives by over three years, says a study by economists from the Universities of Chicago, Harvard and Yale.

Over half of India’s population – roughly 660 million people – live in areas where fine particulate matter pollution is above India’s standards for what is considered safe, said the study.

If India reverses this trend to meet its air standards, this demographic would gain about 3.2 years in their expected life spans, according to the study. In other words, cleaner air would save 2.1 billion life-years, it said.

Furthermore, India has the distinction of recording the world’s highest death rate from chronic respiratory diseases, and more deaths from asthma than any other nation, according to the WHO. The health organisation also claims that India is home to 13 of the world’s 20 most polluted cities.

An estimated 1.5 million people die annually in India due to indoor and outdoor air pollution, which also contributes to both chronic and acute heart disease, the leading cause of death in the country.

In a report submitted to the Supreme Court in December 2014, the country’s Environment Pollution (Prevention and Control) Authority called for increasing the tax on diesel cars, and banning all private vehicles on high air pollution days.

The report also advised that cars older than 15 years be taken off the city’s roads and air purifiers installed at crowded markets; it also called for a crackdown on the burning of trash.

However, the implementation of these measures has been patchy at best, say health activists. Worse, vehicle ownership in India is projected to hit 400 million by 2040 from the current 170 million, says a joint study by the Energy and Resources Institute at the University of California, San Diego, and the California Air Resources Board.

The economic cost of pollution is already proving to be a heavy burden for Asia’s third largest economy. A 2013 World Bank Report highlighted how pollution and other environmental challenges costs India 80 billion dollars a year, nearly six percent of its gross domestic product (GDP).

About 23 percent of child mortality and 2.5 percent of all adult deaths in the country can be attributed to environmental degradation, the study further stated.

Air pollution is now the fifth-leading cause of death in India. Between 2000 and 2010, the annual number of premature deaths linked to air pollution across India shot up six-fold to 620,000, according to the Centre for Science and Environment (CSE), an advocacy group in New Delhi.

Another CSE study out this week has sounded alarm bells over air pollution, particularly from coal-based power plants. The two-year comprehensive environmental audit, conducted on 47 thermal power plants owned by the Centre, state governments and private players, has found that Indian thermal power plants were among the most inefficient in the world, on an average operating at 60 to 70 percent of their installed capacity.

The coal-based power plants were also found to have carbon dioxide emissions that were 14 percent higher than similar plants in China. Also, 76 percent of the plants were unable to meet the targets for ulitisation of ‘fly ash‘, imposed by the Union Ministry of Environment and Forests (MoEF).

With the government showing little interest in formulating a cohesive action plan – involving all stakeholders – for tackling the many-headed hydra of air pollution, it looks like Sharma and her nebulizer will be inseparable for a while.