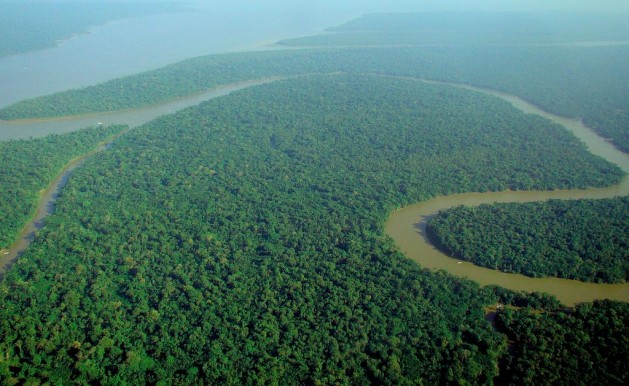 The future of the Amazon rainforest is “dangling by a thread”. Photo credit: By lubasi (Catedral Verde - Floresta Amazonica)/CC BY-SA 2.0

ROME, Apr 2 2015 (IPS) - A global civil society petition to save the Amazon is circulating on the internet and its promoters say that once one million signatures have been collected indigenous leaders will deliver it directly to the governments of Brazil, Colombia and Venezuela.

Launched by ”Avaaz” (“voice” in Persian), a global civic organisation set up in January 2007 to promote activism on issues such as climate change and human rights, citizens around the world the petition invites citizens around the world to voice support for an ambitious project to create the largest environmental reserve in the world, protecting 135 million hectares of Amazon forest, an area more than twice of France.

Avaaz says that the project will not happen “unless Brazil, Colombia and Venezuela’s leaders know the public wants it.” The organisation, which operates in 15 languages and claims over thirty million members in 194 countries, says that it works to “close the gap between the world we have and the world most people everywhere want.”

“This would become the world’s largest ecological (corridor) and would be a great contribution to (the) fight of all humanity to preserve our environment, and in Colombia’s case, to preserve our biodiversity,” Santos said.

The Colombian president added that his foreign minister, Maria Angela Holguin, had been asked to “establish all the mechanisms of communication with Brazil and Venezuela” in order to be able to present a joint “concrete, realistic proposal that conveys to the world the enormous contribution the corridor would make towards preserving humanity and mitigating climate change.”

According to Avaaz, “if we create a huge global push to save the Amazon and combine it with national polls in all three countries, we can give the Colombian president the support he needs to convince Brazil and Venezuela.”

“All three leaders are looking for opportunities to shine at the next U.N. climate summit [in Paris in December],” said Avaaz. “Let’s give it to them.”

The Amazon is widely recognised as being vital to life on earth – 10 percent of all known species live there, and its trees help slow down climate change by storing billions of tonnes of carbon that would otherwise be released into in the atmosphere.

Avaaz says that “the fate of the Amazon rainforest is dangling by a thread.” After declining for a few years, deforestation rates started rising again last year, and shot up in Brazil by 190 percent in August and September.

Current laws and enforcement strategies are failing to stop loggers, miners and ranchers, and according to Avaaz, “the best way to regenerate the forest is by creating large reserves, and this ecological corridor would go a long way to help save the fragile wilderness of the Amazon.”

Countering possible criticism of those who argue that reserves hold back economic development and others who say that they are often implemented without consulting the indigenous communities, Avaaz says that “those behind this proposal have committed to full engagement and collaboration with the indigenous tribes. Eighty percent of the territory in this plan is already protected – all that this ground-breaking proposal really requires is regional coordination and enforcement.”

According to the petition’s promoters, “this is an opportunity to win a tangible and vital project that could help guarantee all of our futures. If it works, this could be replicated in all the world’s most important forests. Together, this could plant a seed that helps look after the whole world.”