NEW DELHI, May 10 2015 (IPS) - President Barack Obama’s Nowroz greeting to the Iranian people earlier this year was the first clear indication to the world that the United States and Iran were very close to agreement on the contents of the nuclear agreement they had been working towards for the previous 16 months.

In contrast to two earlier messages which were barely veiled exhortations to Iranians to stand up to their obscurantist leaders, Obama urged “the peoples and the leaders of Iran” to avail themselves of “the best opportunity in decades to pursue a different relationship between our countries.” 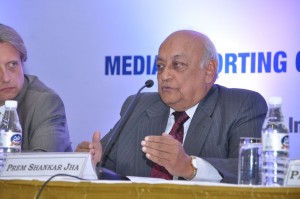 This moment, he warned, “may not come again soon (for) there are people in both our countries and beyond, who oppose a diplomatic solution.”

Barely a fortnight later that deal was done. Iran had agreed to a more than two-thirds reduction in the number of centrifuges it would keep, although a question mark still hung over the timing of the lifting of sanctions against it. The agreement came in the teeth of opposition from hardliners in both Iran and the United States.

Looking back at Obama’s unprecedented overtures to Iran, his direct phone call to President Hassan Rouhani – the first of its kind in 30 years – and his letter to Ayatollah Khamenei in November last year, it is clear in retrospect that they were products of  a rare meeting of minds between him and  Rouhani and their foreign ministers John Kerry and Muhammad Jawad Zarif that may have occurred as early as  their first meetings in September 2013.

The opposition to the deal within the United States proved a far harder obstacle for Obama to surmount. The reason is the dogged and increasingly naked opposition of Israel and the immense influence of the American Israeli Political Action Committee (AIPAC) on U.S. policymakers and public opinion.

Both of these were laid bare came when the Republican party created constitutional history by inviting Israeli Prime Minister Benjamin Netanyahu to address  a joint session of Congress  without informing the White House, listened raptly to his diatribe against Obama, and sent a deliberately insulting letter to Ayatollah Khamenei in a bid to scuttle the talks.

Obama has ploughed on in the teeth of this formidable, highly personalised, attack on him  because he has learnt from the bitter experience of the past four years what Harvard professors John Mearsheimer and Steven Walt had exposed in their path-breaking  book, ‘The Israel lobby and American Foreign Policy’ in 2006.

“Quietly, and utterly alone, Obama decided to reverse the drift, return to diplomacy as the first weapon for increasing national security and returning force to where it had belonged in the previous three centuries, as a weapon of last resort”

This was the utter disregard for America’s national interest and security with which Israel had been manipulating American public opinion, the U.S. Congress and successive U.S. administrations, in pursuit of its own security, since the end of the Cold War.

By the end of 2012, two years into the so-called “Arab Spring”, Obama had also discovered how cynically Turkey and the Wahhabi-Sunni sheikhdoms had manipulated the United States into joining a sectarian vendetta against Syria, and created and armed a Jihadi army whose ultimate target was the West itself.

Nine months later, he found out how Israel had abused the trust the United States reposed in it, and come within a hairsbreadth of pushing it into an attack on Syria that was even less justifiable than then U.S. President George W. Bush’s 2003 invasion of Iraq.  And then the murderous eruption of the Islamic State (ISIS) showed him that the Jihadis were out of control.

Somewhere along this trail of betrayal and disillusionment, Obama experienced the political equivalent of an epiphany.

Twelve years of a U.S. national security strategy that relied on the pre-emptive use of force had  yielded war without end, a string of strategic defeats, a  mauled and traumatised army, mounting international debt and a collapsing hegemony reflected in the impunity with which the so-called friends of the United States were using it to serve their ends.

Quietly, and utterly alone, Obama decided to reverse the drift, return to diplomacy as the first weapon for increasing national security and returning force to where it had belonged in the previous three centuries, as a weapon of last resort. His meeting and discussions with Rouhani and Iranian foreign minister Zarif gave him the opportunity to begin this epic change of direction.

Obama faced his first moment of truth on Nov. 28, 2012 when a Jabhat al Nusra unit north of Aleppo brought down a Syrian army helicopter with a Russian man-portable surface-to-air missile (SAM).

The White House tried to  pretend that that the missile was from a captured Syrian air base, but by then U.S. intelligence agencies were fed up with its suppression and distortion of their intelligence and  leaked it to the Washington Post that 40 SAM missile batteries with launchers, along with hundreds of tonnes of other heavy weapons had been bought from Libya, paid for by Qatar, and transported to the rebels in Syria  by Turkey through a ‘rat line’ that the CIA had helped it to establish, to funnel arms and mercenaries into Syria.

A day that Obama had been dreading had finally arrived: heavy weapons that the United States and the European Union had expressly proscribed, because they could bring down civilian aircraft anywhere in the world, had finally reached Al Qaeda’s hands

But when Obama promptly banned the Jabhat Al Nusra, he got his second shock. At the next ‘Friends of Syria’ meeting in Marrakesh three weeks later, not only the   ‘moderate’ Syrian rebels that the United States had grouped under a newly-formed Syrian Military Council three months earlier, but all of its Sunni Muslim allies condemned the ban, while Britain and France remained silent.

Obama’s third, and worst, moment of truth came nine months later when a relentless campaign by  his closest ‘allies‘, Turkey and Israel, brought him to the verge of launching an all-out aerial attack  on Syria in September 2013 to punish it for “using gas on rebels and civilians in the Ghouta suburb of Damascus.”

Obama learned that Syria had done no such thing only two days before the attack was to commence, when the British informed him that soil samples collected from the site of the Ghouta attack and analysed at their CBW research laboratories at Porton Down, had shown that the sarin gas used in the attack could not possibly have been prepared by the Syrian army.

This was because the British had the complete list of suppliers from which Syria had received its precursor chemicals and these did not match the chemicals used in the sarin gas found in the Ghouta.

Had he gone through with the attack, it would have made Obama ten times worse than George Bush in history’s eyes.

Hindsight allows us to reconstruct how the conviction that Syria was using chemical weapons was implanted into policy-makers in the United States and the European Union.

On Sep. 17, 2012, the Israeli daily Haaretz reported that the highly-reputed German magazine Der Speigel, had learned, “quoting several eyewitnesses”, that Syria had tested delivery systems for chemical warheads   at a chemical weapons research centre near Aleppo in August, and that the tests had been overseen by Iranian experts.

Since neither Der Speigel nor any other Western newspaper had, or still has, resident correspondents in Syria, it could only have obtained this report second or third-hand through a local stringer. This, and the wealth of detail in the report, suggests that the story of a test firing, while not necessarily untrue, was a plant by an intelligence agency. It therefore had to be taken with a large pinch of salt.

One person who not only chose to believe it instantly, but also to act on it was Israel’s Prime Minister Benjamin Netanyahu. On Dec. 3, 2012, Haaretz reported that he had sent emissaries to Amman twice, in October and November, to request Jordan’s permission to overfly its territory to bomb Syria’s chemical weapons facilities.

* The second part of this two-part analysis can be accessed here.