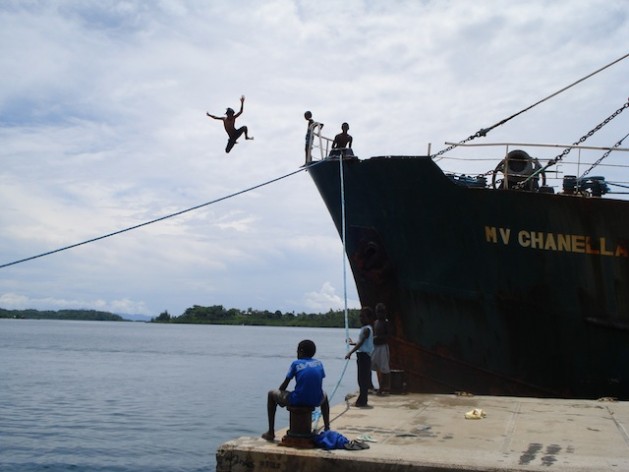 In the Pacific Islands, transportation, including cargo boats that ply the waters between islands, is heavily dependent on fossil fuels. Credit: Catherine Wilson/IPS

CANBERRA, Australia, May 6 2015 (IPS) - The recent dramatic fall in world oil prices, with Brent crude plummeting from a high of 115 dollars per barrel in June last year to around 47 dollars in January 2015, is beginning to benefit Pacific Islanders who are seeing lower prices for fuel and energy.

Although the global price per barrel inched up to 68 dollars in early May, regional experts continue to anticipate fiscal gains as the trend eases costs of government operations and service delivery.

“How and to what extent [Pacific Island governments] will be able to derive benefits from the dramatic oil price drop depends on how quickly they [...] channel public spending on infrastructure and other development programmes.” -- Dr. Dibyendu Maiti, associate professor at the School of Economics at the University of the South Pacific, Fiji
“There is evidence to suggest that reduced fuel costs are having some impact in all Pacific Island markets, at least through lower prices charged for fuel, but the impact on secondary markets, like food and transport, may take longer to be realised,” Alan Bartmanovich, Petroleum Adviser to the Secretariat of the Pacific Community (SPC) in Fiji, told IPS.

It will take time for the oil price drop to fully impact island governments and all economic sectors due to the length of supply chains and other factors, such as price fuel regulation within countries, he added.

A global oversupply of oil, due to a surge in United States production and decline in consumption driven by reduced growth in Europe and Asia, have been the main causes of the downward price trend.

The decision of the Organisation of Petroleum Exporting Countries (OPEC), including Saudi Arabia and Venezuela, which produces 40 percent of the world’s crude oil, to maintain its level of output has diminished the likelihood of prices soaring again quickly.

The Pacific Islands region is home to 10 million people living in 22 countries and territories totalling thousands of islands spread across 180 million square kilometres of the Pacific Ocean.

According to the World Bank, more than 20 percent of Pacific Islanders are unable to afford basic needs, while employment relative to population is a low 30-50 percent in Micronesia, Fiji, Kiribati, Marshall Islands, Nauru, Samoa, Tonga and Tuvalu.

Capitalising on lower oil prices will be vital to improving the lives and development outcomes of millions of people in this region, where the vast majority live in rural areas with little access to basic facilities and global job markets.

Many countries have embarked on plans to transition to renewable energy, but the region still depends heavily on fossil fuels, especially for power and transportation.

In Fiji, Maureen Penjueli, coordinator of the Pacific Network on Globalisation, a regional civil society organisation, said, “Only a month ago the people of Fiji started to enjoy the real benefits of the fall in oil prices, particularly at the gas pumps, but also for basic energy needs, such as kerosene.”

Since 2014, the price of diesel in Fiji, commonly used to fuel power generators, has dropped from 1.17 dollars to 0.82 dollars per litre in April this year.

Over the same period, the cost of kerosene has fallen from 1.09 dollars to 0.62 dollars per litre.

“The cost of kerosene coming down is significant as this benefit trickles right down to rural and urban areas where most people are dependent on it as a source of energy for cooking,” Penjueli continued.

The trend is welcomed in the region after soaring oil prices from 2002-2008 and the global financial crisis intensified fiscal pressures, costing many Pacific Island countries about 10 percent of their gross national incomes. 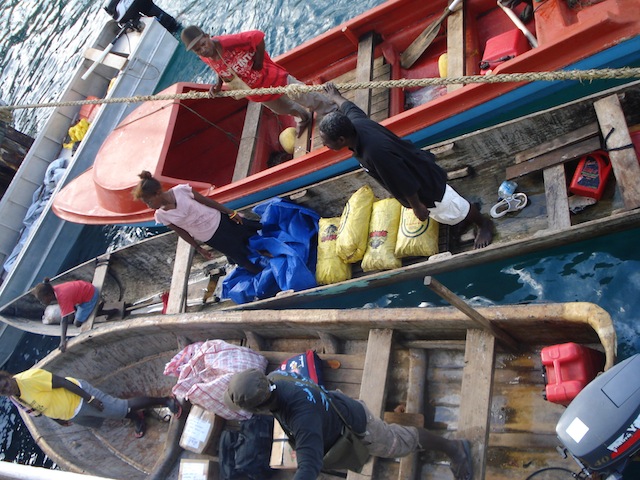 Rural communities in the Solomon Islands use fossil fuels for transportation, such as motorized canoes. Catherine Wilson/IPS

At this time ordinary Pacific Islanders witnessed escalating food, electricity and transport costs. Between 2009 and 2010 some staple food prices increased by 50-100 percent in at least six Pacific Island countries.

In Vanuatu, the price of taro rose from 1.95 to 3.91 dollars and yams from 6.85 to 14.68 dollars. The purchasing power of family incomes shrunk, with the poorest often the worst hit.

But, according to Penjueli, food prices remain largely unaffected so far by fuel price reductions.

“The rationale is that there should be a drop in prices of both imported foods and local produce because transportation costs will come down, however, we really haven’t seen that benefit yet. Retail stores have not brought their prices down,” she said.

The World Bank claims that a decline of 10 percent in world oil prices is likely to boost economic growth in oil importing countries about 0.1-0.5 percentage points.

But while prices declined about 30-40 percent in 2014-15, current growth forecasts for the region remain modest. GDP growth in the Solomon Islands, Fiji and Vanuatu is predicted to remain the same from 2015-2016 at 3.5 percent, 2.5 percent and 3.2 percent respectively.

Global oil prices are forecasted to remain low during the course of this year and increase marginally in 2016.

Dr. Dibyendu Maiti, associate professor at the School of Economics at the University of the South Pacific, Fiji, emphasised it was important for Pacific Island governments to respond to the price shift.

“How and to what extent they [governments] will be able to derive benefits from the dramatic oil price drop depends on how quickly they adjust the inflation target and channel public spending on infrastructure and other development programmes.”

Some priorities include investing more in higher education and skills development and “encouraging the private sector to participate with more investment. This would have a long term spill-over effect […] such as raising employment,” Maiti told IPS.

Beyond the oil market, reducing the vulnerability of the Pacific Islands to economic shocks and alleviating the financial burden of fossil fuel imports demands that countries remain on course with plans to convert to locally generated renewable energy.

Three years ago, Tokelau, a tiny Polynesian territory in the central Pacific, led the way by converting to 100 percent renewable energy with a large off-grid solar system providing power to its population of 1,411.

It was a critical move toward sustainable development given Tokelau’s GDP is about 1.5 million dollars, while its annual fuel importation bill was around 754,000 dollars.