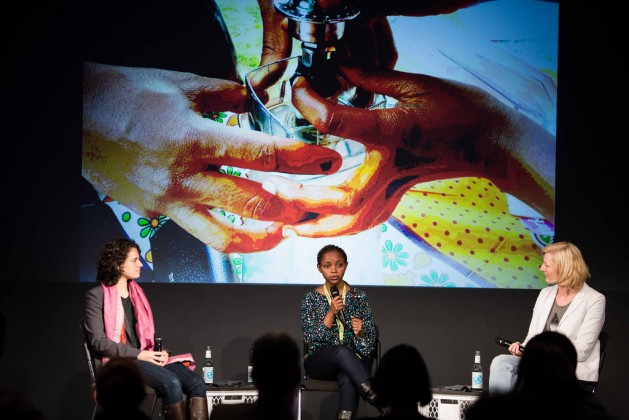 During re:publica 2015, Juliet Wanyiri (centre), illustrates a practical workshop organised by Foondi*, of which she is founder and CEO. Credit: re:publica/Jan Zappner

BERLIN, Jun 26 2015 (IPS) - In a major paradigm shift, the German government is now placing its bets on digitalisation for its development cooperation policy with Africa, under what it calls a Strategic Partnership for a ’Digital Africa’.

According to the German Federal Ministry for Economic Cooperation and Development (BMZ), “through a new strategic partnership in the field of information and communication technology (ICT), German development cooperation will be joining forces with the private sector to support the development and sustainable management of Digital Africa’s potential.”

“Digitalisation offers a vast potential for making headway on Africa’s sustainable development,” said Dr Friedrich Kitschelt, a State Secretary in BMZ, noting however that this “benefits all sides, including German and European enterprises.”

Broad consensus about the overlap between public and private interests in attaining sustainable development goals was apparent at two high-profile events earlier this year – the annual re:publica conference on internet and society, and BMZ’s ‘Africa: Continent of Opportunities – Bridging the Digital Divide’ conference, both held in Berlin.

"Governments will put up walls, but young people will always find ways of circumventing barriers – the key issue is how to bring services locally and work together in democratic internet governance, promoting civil society engagement and private sector partnerships” – Muhammad Radwan of icecairo

In Berlin for re:publica 2015 in May, Mugethi Gitau, a young Kenyan tech manager from Nairobi’s iHub, an incubator for “technology, innovation and community”, delivered a sharp presentation titled ‘10 Things Europe Can Learn From Africa’.  “We are pushing ahead with creative digital solutions,” said Gitau, delivering sharp know-how and hard facts.

The Kenyan start-up iHub is a member of the m:lab East Africa consortium, the region’s centre for mobile entrepreneurship, which was established through a seed grant from the World Bank’s InfoDev programme for “creating sustainable businesses in the knowledge economy”.

In turn, m:lab East Africa is part of the Global Information Gathering (GIG) initiative, which was founded in Berlin in 2003 as a partnership of BMZ, the German Federal Enterprise for International Cooperation (GIZ), the Centre for International Peace Operations (ZIF) and the International Telecommunications Union (ITU).

The m:lab East Africa consortium has spawned 10 tech businesses which have gone regional, and boasts a portfolio of 150 start-ups, including Kopo Kopo, an add on to the M-Pesa money transfer application which has scaled into Africa, the PesaPal application for mobile credits, the Eneza ‘one laptop per child’ project, and locally relevant rural applications such as iCow and M-Farm which help farmers keep track of their yields and cut out the middleman to reach buyers directly.

“We are by nature a people who love to give, crowdsourcing is in our genes, our local villages have a tradition of coming together to help each other out, so it’s no wonder we have taken to sharing and social media like naturals,” Gitau told IPS, mentioning the popular chamas or “merry-go-rounds” whereby people bank with each other, avoiding banking interest costs.

Referring to the exponential tide of 700 million mobile phone users in Africa, which has already surpassed Europe, Thomas Silberhorn, a State Secretary in BMZ, told a re:publica meeting on e-information and freedom of information projects in developing countries: “This is a time of huge potential, like all historical transformations.”

The pace and range of innovative mobile solutions from Africa has been formidable. The creative use of SMS has enabled a range of services which enable urban and, significantly, rural populations to access anything from banking to health services, job listings and microcredits, not to mention mobilising “shit storms” against public authority inefficiencies.

However, the formidable pace of digital penetration has raised concerns about the “digital divide” – the widening socio-economic inequalities between those who have access to technology and those who have not.

Increasingly a North-South consensus is growing concerning three core aspects of digital economic development – the regulation of broadband internet as a public utility; the sustainable potential of mobile technology and low price smart devices to bring effective solutions to a whole gamut of local needs; and the need for good infrastructure as a precondition for environmental protection and as the leverage people need to lift themselves out of poverty.

New models of development cooperation, technology transfer and e-participation governance are emerging in response to the impact of digitalisation on all sectors of society and service provision in areas as disparate as they are increasingly connected including health, food and agriculture – access to education, communication, media, information and data and democratic participation.

“Tackling the digital divide is crucial,” said Philibert Nsengimana, Rwandan Minister of Youth and ICT, addressing BMZ’s ‘Africa: Continent of Opportunities – Bridging the Digital Divide’ conference. “It encompasses a package of vision, implementation and much needed coordination among stakeholders.”

Rwanda, which now boasts a number of e-participation projects such as Sobanukirwa, the country’s first freedom of information project, is committed to universally accessible broadband and is rising to the forefront of Africa’s power-sharing technical revolution.

The most active proponents of the e-revolution argue that digitalisation also offers the possibility to place governments under scrutiny and have leaders judged from the vantage point of e-participation, open data, freedom of expression and information – all elements of the power-sharing models that have seen the light  in the internet age.

“Governments will put up walls, but young people will always find ways of circumventing barriers – the key issue is how to bring services locally and work together in democratic internet governance, promoting civil society engagement and private sector partnerships,” said Muhammad Radwan of icecairo.

The icecairo initiative is part of the international icehubs network, which started with iceaddis in Ethiopia and icebauhaus in Germany.

The icehubs network (where ‘ice’ stands for Innovation-Collaboration-Enterprise) is an emerging open network of ‘hubs’, or community-driven technology innovation spaces, that promote the invention and development of home-grown, affordable technological products and services for meeting local challenges.

The network is enabled by GIZ, a company specialising in international development, which is owned by the German government and mainly operates on behalf of BMZ, which is now intent on using a “digital agenda” to guide German development cooperation with Africa.

“Let us take digitalisation seriously,” said Kitschelt. “Let us use the potential of ICT for development, address the digital and educational divide and build on that resourcefulness in our partnerships by advocating for digital rights and engaging in dialogue with the tech community, software developers, social entrepreneurs, makers, hackers, bloggers, programmers and internet activists worldwide.”

Kitschelt’s words certainly found their echo among African e-revolutionaries whose rallying cry has moved forward significantly from “fight the power“ to “share the power”.

However, while this may be well be what the future looks like, there were also those at the re:publica meeting on e-information and freedom of information who wondered about priorities when Silberhorn of BMZ told participants: “”The fact that in many development countries we are witnessing better access to mobile phones than toilets is a clear catalyser for changing development priorities.”

*  Foondi is an African design and training start-up that focuses on creating access to open source, low-cost appropriate technology-related sources to leverage local technologies for bottom-up innovation. It provides a platform for problem setting, designing and prototyping entrepreneurial-based ventures. Its larger vision is to nurture a group of young innovators in Africa working on building solutions that target emerging markets and under-served communities in Africa.