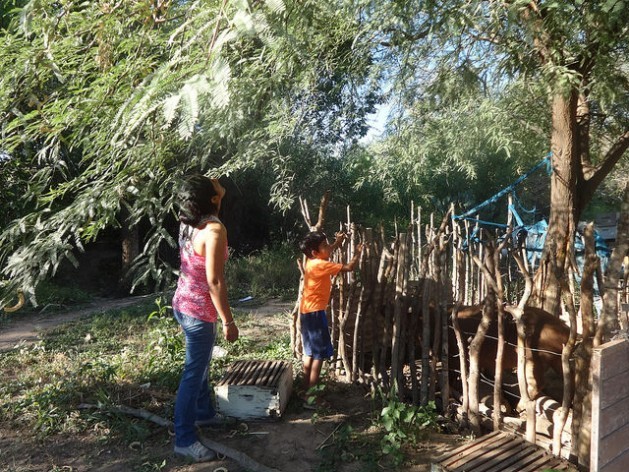 A boy helps his mother, Graciela Ardiles, do chores on their small farm in Arraga in the northern Argentine province of Santiago del Estero. Thanks to a rural development programme that has boosted the family’s income, she says her children will be able to continue studying, and even go on to university, unlike her parents. Credit: Fabiana Frayssinet/IPS

BUENOS AIRES, Jun 23 2015 (IPS) - Until not too long ago, youngsters in Argentina faced a choice: whether to study or drop out and go to work. But now most children and adolescents in Argentina who work also continue to study – a change that poses new challenges for combating school dropout, repetition and truancy, as well as the circle of poverty.

The change is revealing, according to Néstor López at the United Nations Educational, Scientific and Cultural Organisation’s International Institute for Education Planning (IIEP UNESCO), which together with the International Labour Organisation (ILO) produced the report “Trabajo infantil y trayectorias escolares protegidas en Argentina” on child labour and education, launched this month, which discusses the new situation.

“When you analysed what was happening with teenagers 20 years ago, you saw two different situations,” López said in an interview with IPS. “There were adolescents in school and adolescents who worked.”

“But what you see now is that school enrollment rates have gone up significantly, which has meant to some extent a reduction in their rates of participation in the labour market, but has also meant an increase in the proportion of adolescents who both study and work,” he said.

In 2013, practically all children in Argentina between the ages of five and 14 and 84 percent of adolescents between 15 and 17 were in school, the study says.

Gustavo Ponce, an ILO expert in prevention and eradication of child labour, said measures like the 2006 National Education Law, which made education obligatory until the last year of secondary school (17 or 18 years of age), contributed to the new trend of adolescents working and studying at the same time.

“Progress has also been made in terms of legislation and regulations, with a law that raised the minimum working age to 16, which included the question of protection of adolescent workers aged 16 and 17,” Ponce told IPS.

He was referring to a law that protects young people from heavy or dangerous work, or work that makes it impossible for them to attend school or endangers their health.

He was also referring to the 2013 reform of the penal code, which made child labour a crime.

In their report, the ILO and UNESCO mentioned these measures as well as others, such as the Universal Child Allowance cash transfer programme, which have helped discourage child labour by boosting the incomes of poor families.

“Yes, you could say there has been a policy to eradicate child labour,” said Ponce.

López said that what is needed now is to continue improving school enrollment and attendance among adolescents. According to the new study, of the children between the ages of five and 13 who both work and attend school, approximately one-third repeat the year, compared to 13 percent of children who do not work.

And in the case of adolescents who work, 26 percent do not go to school, and 43 percent of those who do attend school are held back. Among those who only study, 27 percent repeat the year.

“It’s better than if they were just working,” said López. “It’s good for kids who are working to also be studying, preparing for their future. You could say it’s a positive thing if the kids who have to work can also go to school.”

Overall, though, “it’s negative because what the statistics, studies and common sense show is that these kids have a lower quality educational experience, because they don’t have time to do their homework, they don’t have time to study, they go to school tired, they miss school more, and they get less out of the educational experience for different reasons,” he added.

But another concern are less visible forms of child labour, such as unpaid housework and caregiving, which especially affect girls and young women, including caring for younger siblings, cleaning the house, fixing meals, and taking care of small barnyard animals.

“Educational level is one of the main mechanisms used by the labour market to select workers. Access or lack of access to formal education is one of the aspects most heavily associated with the process of intergenerational accumulation of social disadvantage,” says the report.

Among the measures to encourage school attendance, the ILO proposes improving the network of free public services that support caregivers, including childcare centres, preschools, and double shifts in schools. In Argentina, schoolchildren attend either the morning or the afternoon shift. But full-day schools are becoming more common in low-income areas, enabling mothers to work.

“When we interview parents, for example, it’s clear that they think it’s normal to feed and milk the livestock before going to school, as if it were a way to help out at home and a positive learning experience rather than work that children do at home,” the report says.

The trade unions, meanwhile, say the concept of eradicating child labour should also be included in the educational curriculum.

Hernán Rugirello, with the Confederación General del Trabajo central trade union’s social research centre, told IPS about an initiative carried out by the union in Mar del Plata, a city 400 km south of Buenos Aires. With the help of the teachers’ union, the issues surrounding child labour have begun to be taught in schools there.

“It’s important to put this problem on the agenda, so that young people will also start understanding it and will become agents of transmission of knowledge, bringing the issues home with them,” he said.