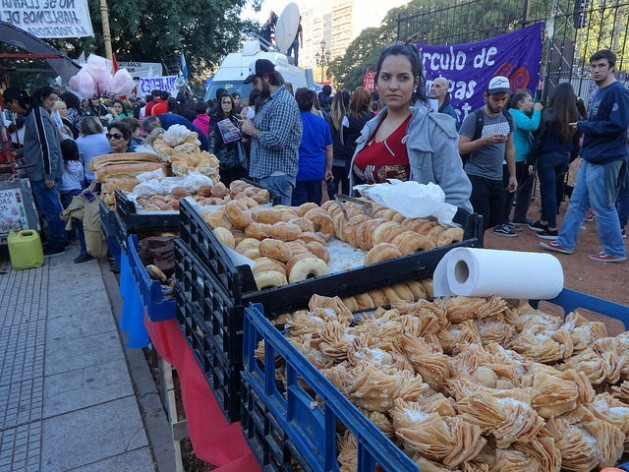 BUENOS AIRES, Jul 23 2015 (IPS) - The 56 million young people who form part of Latin America’s labour force suffer from high unemployment, and many of those who work do so in the informal sector. Governments in the region have begun to adopt more innovative policies to address a problem that undermines the future of the new generations.

According to an International Labour (ILO) report, unemployment among young people between the ages of 14 and 25 is three times higher than among adults.

That is just one aspect of the problem, however according to the coordinator of the study, Guillermo Dema from Peru. “These statistics are compelling, but the main problem faced by young people in Latin America is the precariousness and poor quality of the work they have access to,” he told IPS.

The region’s seven million unemployed young people represent 40 percent of total unemployment. But another 27 million have precarious work, which aggravates the phenomenon.The total population of young people in Latin America is around 108 million, of the region’s 600 million people.

“Six out of every 10 jobs available to young people today are in the informal sector,” said Dema. “In general they are poor quality, low-productivity and low-wage jobs with no stability or future, and without social protection or rights.”

Gala Díaz Langou with Argentina’s Centre for the Implementation of Public Policies for Equity and Growth said “An informal sector worker has no job security, health coverage, trade union representation, or payments towards a future pension. That means unregistered workers do not have decent work.”

In summary, “their basic labour rights are violated, and they can’t demand respect for their rights by means of representation or social dialogue,” she told IPS.

“Six out of every 10 jobs available to young people today are in the informal sector. In general they are poor quality, low-productivity and low-wage jobs with no stability or future, and without social protection or rights.” -- Guillermo Dema

The poor are overrepresented in the informal economy. Only 22 percent of young people in the poorest quintile have formal work contracts, and just 12 percent are registered in the social security system, according to the ILO.

But precarious employment also affects middle-class young people, including those who have higher education.

“The big problem in landing a serious job today is what I call the ‘vicious cycle’. To get a job you need work experience, but to get experience you need a job,” Hernán F, a 23-year-old from Argentina who juggles work and university studies and speaks several languages, told IPS.

“Obviously if you’ve studied at university you go farther,” said Hernán, who asked that his last name not be used.” But that’s where you see the big difference between ‘good’ and ‘bad’ universities. The good ones, which are recognised and have good names, open many more doors for internships – even if they’re poorly paid – in better places.”

Most precarious jobs are in small and micro enterprises that do not formally exist. But 32 percent of young people who work in formal companies also suffer from precarious employment, the ILO reports.

The rate of informal labour among young wage-earners is 45.4 percent, while among those who are self-employed, the proportion climbs to 86 percent.

“When you’re young you don’t think about the future, about your retirement. You think about the present, paying rent, vacation. You don’t care about working in the black economy. You care about having a job, probably earning a little more than if you were formally employed,” said Hernán F.

But for Hernán, who worked as an unregistered employee in a boutique hotel in Buenos Aires, “it’s not the young people’s fault.”

“Capitalism, which created this system, and the people who hire you without registering you are to blame. They want more, easier money. They make you hide in the bathrooms when the inspectors come to check the hotel. And it’s also the state’s fault, because it doesn’t oversee things as it should, and allows labour inspectors to be bribed,” he said.

Dema said informal labour fuels “discouragement and frustration among those who feel that they don’t have the opportunities they deserve.

“This has social, economic and political repercussions, because it can translate into situations where people question the system, or situations of instability or marginalisation, which can affect governance,” he warned.

It also perpetuates the cycle of poverty and hinders the fight against inequality.

But in spite of the continued problems, the region is “slowly” improving, he added.

From 2009 to 2013, the proportion of young people in informal employment in the region fell from 60 to 47 percent. But there are some exceptions like Honduras, Paraguay and Peru, where no significant progress was made.

Innovative policies to the rescue

Dema attibutes the improvement to government measures, which are cited by the ILO report, launched in April by the organisation’s regional office in Lima with the promising title: “Promoting formal employment among youth: innovative experiences in Latin America and the Caribbean”.

He said initiatives have emerged that focus on combining attempts to formalise employment while adapting “to the heterogeneity of the economy and informal employment,” together with strategies to help young people land their first formal sector job.

He mentioned Brazil’s Apprenticeship Act, which introduced a special work contract for young apprentices, that can be used for a maximum of two years.

The law requires all medium and large companies to hire apprentices between the ages of 14 and 24, who must make up five to 15 percent of the payroll.

These laws, he said, “provide for monetary subsidies, subsidies for wages or social security contributions, or tax breaks. “

For her part, Díaz Langou, with the Centre of Implementation of Public Policies for Equity and Growth, mentioned Argentina’s “More and better work for young people” programme, which targets people between the ages of 18 and 24.

“It was a very interesting and successful initiative aimed at combining education with active employment policies, to achieve better insertion of this age group in the labour market,” she said.

Dema also cited Mexican programmes aimed at promoting the regularisation of informal sector employment, such as the Let’s Growth Together programme, which “incorporates the concepts of gradualism, advice and support in the transition from informal to formal employment.”

Another model, the expert said, is offered by Colombia with its “formalisation brigades,” which incorporate benefits and services for companies that regularise their activities and employees.

These initiatives are complemented by social protection policies.

“In Argentina, the Universal Child Allowance is compatible with the workers registered in the ‘monotributo social’ (simplified tax regime for small taxpayers) and those who are registered in the domestic service regime. And in Colombia, the law on the formalisation and generation of employment establishes the coordination of contracts with the ‘Families in Action’ programme and Subsidised Health Insurance,” he said.

Díaz Langou said that international experiences have shown that one of the policies that works best is the introduction of incentives to hire young workers, such as offering subsidies or tax breaks to companies that hire them.

“But this has provided much better results for men than for women,” she said. “Policies tailored towards improving the skills of young people by means of training and education have more modest effects on wages for young people, and also present gender disparities.”