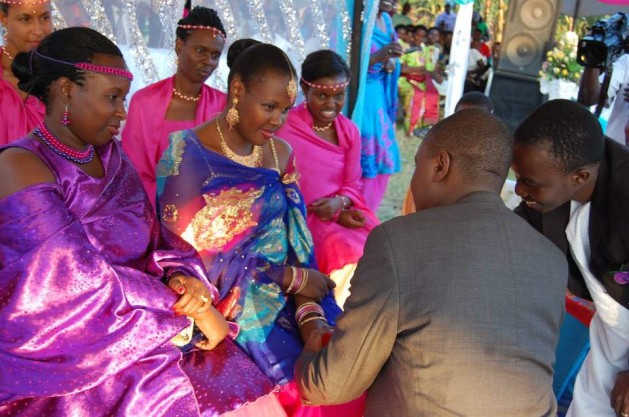 A Ugandan marriage ceremony known as ‘kuhingira’ at which the groom pays a ‘bride price’. The country’s Supreme Court has now ruled that refunding them if the marriage breaks up is unconstitutional. Credit: Wambi Michael/IPS

KAMPALA, Aug 7 2015 (IPS) - After years of a protracted battle against Uganda’s “bride price” practice, the country’s Supreme Court this week ruled that husbands can no longer demand that it be returned in the event of dissolution of a customary marriage but has stopped short of declaring the practice itself unconstitutional.

In a country in which most marriages are customary, women’s rights activists have hailed the decision as a step in the right direction for greater equality in the marriage relationship but had hoped that the court would rule the bride price – or dowry – itself unconstitutional.

In Uganda, the bride price is the gift that is given as a token of appreciation by grooms to the families of their brides. Traditionally, it takes the forms of cows or goats, besides money, and some tribes have recently been demanding articles such as sofas and refrigerators among others.

The legal battle over “bride prices” started back in 2007 when MIFUMI, a non-governmental women’s rights organisation based in Kampala, filed a petition to Uganda’s Constitutional Court, seeking to have them declared unconstitutional.

“Refund of the bride price connotes that a woman is on loan and can be returned and money recovered. This compromises the dignity of a woman" – Uganda’s Chief Justice Bert Katureebe

MIFUMI, whose work revolves around the protection of women and children experiencing violence and other forms of abuse, argues that if women are empowered they can rise above many of the cultural traditions, such as bride price, that hold them back, blocking their potential contribution to development.

The MIFUMI petition argued that the demand for and payment of bride price by the groom to the parents of the bride, as practised by many communities in Uganda, gives rise to conditions of inequality during marriage contrary to the country’s constitutional provisions which guarantee that men and women be accorded equal rights in marriage and its dissolution.

Undeterred, MIFUMI decided to appeal to the country’s Supreme Court and finally, in a 6-1 decision, the judges have ruled that the act of refunding the bride price is contrary to the country’s constitution regarding equality in contracting marriage, during marriage and in its dissolution.

Justice Tumwesigye further argued that one effect of the bride’s parents no longer having bride price goods or cash to refund could force a married woman into a situation of marital abuse for fear that her parents would be in trouble owing to their inability to refund the bride price.

Uganda’s Chief Justice Bert Katureebe, one of the six judges, ruled that “refund of the bride price connotes that a woman is on loan and can be returned and money recovered. This compromises the dignity of a woman.”

The judges of the Supreme Court unanimously agreed that referring to bridal gifts as bride price reduces its significance to a mere market value.

Solomy Awiidi, a legal officer with MIFUMI told IPS after the judgment that she was happy that ruling had partly struck off some of the cultural practice that has held women hostage in abusive marriages.

She said much as MIFUMI had wanted the whole issue of bride price totally abolished, the fact that court had ruled against refund was something to celebrate after 15 years of struggle against the practice.

“There are fathers and brothers of brides facing civil suit because they failed to return the bride price, while thousand if not millions of women across the country who have been abused because of failure to refund the bride price. This ruling will liberate many of them,” said Awiidi.

Kampala-based human rights lawyer Ladislaus Rwakafuzi, who has been the principal lawyer for the MIFUMI petition, told IPS: “We have not got everything we wanted but at least we know that people will start being cautious paying too much when they know there is going to be no refund when there is failure of the marriage.”

Rita Achiro, Executive Director of the Uganda Women’s Network (UWONET), told IPS that the ruling has shown that women of Uganda can use courts of law to fight against laws that oppress them.

She said there were precedents in which Ugandan courts had nullified laws discriminating against women but Parliament and government had failed to enact the laws needed enforce the judgments.

Achiro cited the March 2004 Constitutional Court ruling that struck down ten sections of the Divorce Law on the grounds that they contravened a clause in the constitution that guaranteed women and men equal rights.

Uganda’s Divorce Law had previously allowed men to leave their wives in cases of adultery, while women were not granted the same right because they had to prove their husbands guilty not only of adultery but also of a range of crimes including bigamy, sodomy, rape and desertion.

A panel of five constitutional judges unanimously upheld the view that grounds for divorce must apply equally to all parties in a marriage.  Women activists had hailed the judgment as a landmark ruling that would bring equality of the sexes but, eleven year later, no law has yet been enacted to enforce the ruling.