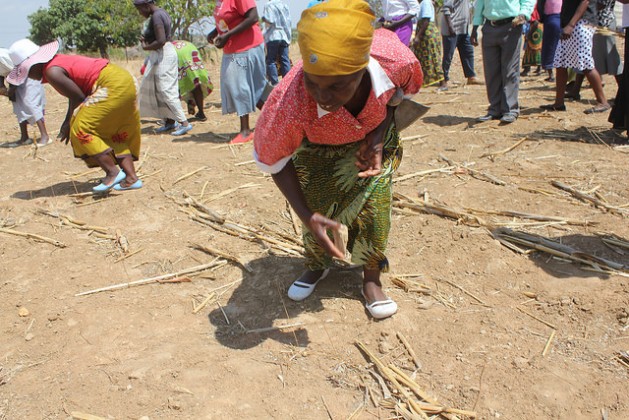 HARARE, Mar 22 2017 (IPS) - To take his mangoes to Shurugwi, 230 kms south of Harare, requires Edward Madzokere to hire a cart and wake up at dawn. The fruit farmer sells his produce at the nearest “growth point” at Tongogara (the term for areas targeted for development) where the prices are not stable.

“As a fruit grower, I have been forced to sell the fruits for very little rather than let them rot,” he told IPS.

The poor performance of the economy has not made life easier for Madzokere, who struggles to provide for his family’s basic needs.

“I wish to have knowledge to make mango fruit jam or to be able to dry fruits for selling,” he said. Madzokere believes with better information and the creation of links to outside markets for his produce, he can go a long way in this sector.

The U.N. Food and Agriculture Organisation (FAO) has highlighted the concentration of smallholder farmers in subsistence farming rather than farming as a business, which means they have low demand for inputs, resulting in few incentives for input suppliers to reach the farmers.

For Elias Matongo, an agribusiness dealer in Shurugwi, it’s the same story. Matongo has been struggling to convince financial institutions to give him enough capital to expand his business. So far he has only managed to raise 2,500 dollars, which isn’t enough.

“Agricultural inputs are very expensive, I need to get a loan for 5,000 dollars and more to be able to make farming inputs available and closer to farmers,” Matongo told IPS.

FAO notes that 68 percent of Zimbabweans live in rural areas, where the economy is dominated by agriculture. In 2012, 76 percent of rural households were found to be poor. The agency further states that smallholder farmers often live in remote locations where infrastructure is poor and where input suppliers and buyers do not travel.

Ali Said Yesuf, FAO’s Chief Technical Advisor, told IPS that his organization, with financial support from the United Kingdom’s Department for International Development (DFID) of 72 million dollars, has launched the Livelihood and Food Security Program (LFSP) to increase agricultural productivity, increase incomes, improve food and nutrition security, and reduce poverty in rural Zimbabwe. The project, which commenced in 2015, will ultimately be implemented in eight districts in the country.

“LFSP will actively address the specific constraints that smallholder farmers face in raising the productivity of their farms and creating markets for their farming produce,” says Yesuf.

More than 349,000 Zimbabweans are expected to be reached by 2018, selected based on poverty levels, food uncertainty and potential for market development.

Another key player, the World Food Program (WFP), is also working with FAO to support 5,389 smallholder farmers with the production of drought tolerant small grains, in order to strengthen their resilience. Last December, 93 percent of the planned 646 hectares were planted in selected areas in the country, including extension services, as WFP and FAO provide farming inputs such as seeds and fertilizers to small-scale farmers.

“Building resilience before, during and after disasters is necessary for supporting the government of Zimbabwe to achieve food security and adequate nutrition for all people by 2030, in line with the Sustainable Development Goals,” Rowe told IPS.

FAO believes smallholder farmers play a critical role in food and nutrition security in Zimbabwe as they account for the bulk of the food that is produced in the country. Zimbabwe’s has since put in place its Country Strategic Plan (2017-2021) to enable smallholder farmers to have increased access to well-functioning markets by 2030 supporting initiatives that promote efficient and profitable marketing.

In Manicaland Province, the Extended Nutrition Impact for Positive Practice (ENIPA) has been introduced. The program is a nutrition behaviour change methodology for promoting identified good nutrition and health practices. The approach encourages the participation of men to so that they become the change agents and champions in the communities.

“Men’s participation is transformative as it transforms the household decision-making dynamics. It’s turning out that a man who understand the importance of consuming nutritious food will support his wife to purchase/grow the same,” Yesuf said.

The project is providing training in nutrition-sensitive agriculture through modules such as healthy harvest where there is selection, production, processing and preparation of diversified food types.

Supporting small holder farmers in the country is a certain path to sustainable production, with farmers like Madzokere already learning new concepts, broadening their horizons and focusing on outside markets. In this context, investing in agriculture simply makes good business sense.