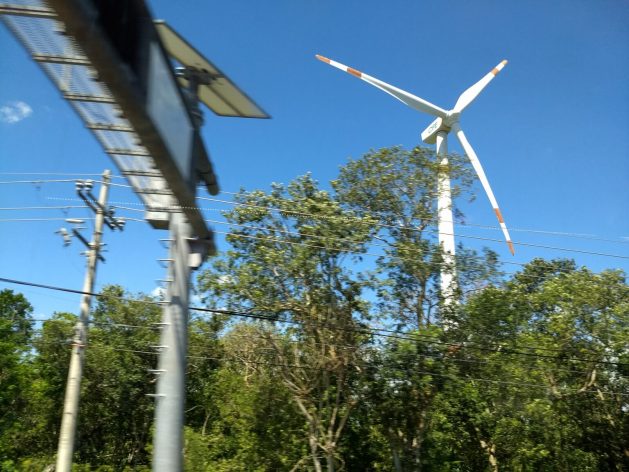 The Yucatán peninsula in southeastern Mexico has abundant solar and wind resources, but relies on fossil fuels for electricity generation. The photo shows a wind turbine belonging to the state-owned CFE next to a section of the power grid between Cancún and Puerto Morelos, in the state of Quintana Roo. CREDIT: Emilio Godoy/IPS

MÉRIDA, Mexico , Apr 18 2022 (IPS) - At home, Isabel Bracamontes uses gas only for cooking. “We try to prepare food that doesn’t need cooking, like salads,” she says in the southeastern Mexican city of Mérida.

The 20-kilogram cooking gas cylinder lasts her between three and four months, and by using it less she saves money, since the price has increased in recent months. The electricity in her home comes from plants fired by gas that is essentially methane, which has 86 times more capacity to absorb heat than carbon dioxide over a period of 20 years, hence the danger it poses to the climate.

An environmental activist and mother of one, Bracamontes lives in a middle-class neighborhood where other families face a similar situation to hers with regard to gas.

Comprised of the states of Campeche, Quintana Roo and Yucatán, of which Mérida is the capital, Yucatán receives enormous amounts of sun and wind but depends on gas to meet its electricity needs.

Quietly, this fuel is spreading throughout the peninsula, which is particularly vulnerable to droughts, intense storms and rising sea levels – symptoms of the climate crisis, one of the main causes of which is the burning of fossil fuels.

The peninsula receives gas through the Mayakán pipeline, a 780-kilometer pipeline owned by the Italian company Engie. The gas is injected from Ciudad Pemex, in the state of Tabasco, adjacent to the west of the peninsula, and the pipeline has been in operation since 1999.

In 2020, the Cuxtal I expansion also came into operation, with a 16-kilometer pipeline which connects to the Cactus Gas Processing Complex in the state of Chiapas, to the south of the peninsula.

The government’s Comisión Federal de Electricidad (CFE) purchases gas from the state-owned oil giant Petróleos Mexicanos (Pemex) to deliver it to its thermoelectric plants Lerma in Campeche, Valladolid and Mérida II in Yucatán, as well as to the private combined cycle plants Mérida III and Valladolid III, which operate with gas and steam.

“The big problem is the direction the energy sector is headed. It's not what the transition needs. Climate action is full of false solutions, like trying to fight climate change with gas." -- Pablo Ramírez

The peninsula has a generation capacity of 2455 megawatts (MW), of which combined cycle thermoelectricity contributes 1463, turbogas 368, conventional thermal 314, wind 244, solar 50, and internal combustion 14, according to the U.S. government’s National Renewable Energy Laboratory (NREL).

According to official Mexican data, five solar and wind farms are operating in the state of Yucatán alone. But communities opposed to renewable initiatives have managed to block at least six other projects of this type, due to their environmental impact and the failure to carry out consultations with local indigenous residents.

In December, the state of Yucatán was the sixth of the 32 Mexican states with the highest number of contracts for the installation of residential solar panels of less than 0.5 MW, with 12,458 producing a total of 89 MW. Quintana Roo had 3969 that produced 27 MW, while Campeche was the state with the fewest, with 1515 producing 11 MW, according to figures from the official Energy Regulatory Commission.

In the entire peninsula, the CFE requires about 340 million cubic feet of gas per day for its plants in this region, while total demand is about 500 million, including 160 million for industry and commerce, according to the Confederation of National Chambers of Commerce, Services and Tourism. 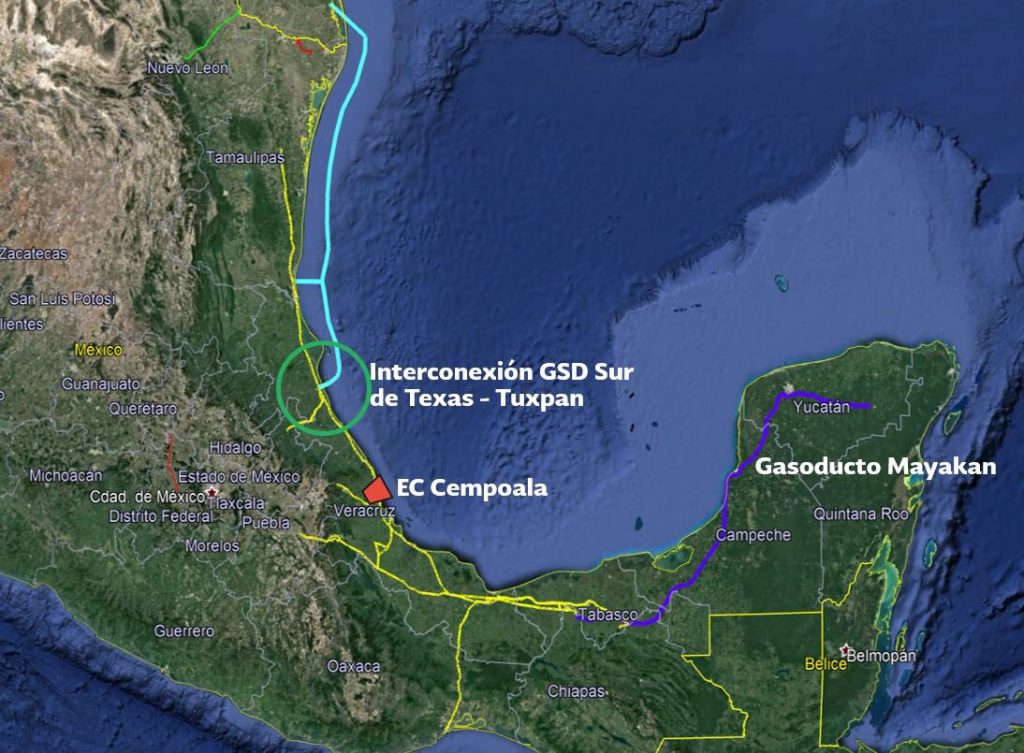 A map of the Yucatán peninsula on the Caribbean Sea in southeastern Mexico shows the route of the 780-kilometer Mayakán pipeline, which carries natural gas from the state of Tabasco to the three states of that region. CREDIT: Sener

Running against the current on fossil fuels

Pablo Ramírez, Energy and Climate Change specialist with environmental watchdog Greenpeace Mexico, questioned the expansion of gas in Yucatán and the rest of the country.

“The big problem is the direction the energy sector is headed. It’s not what the transition needs. Climate action is full of false solutions, like trying to fight climate change with gas,” he told IPS from Mexico City.

Mexico is the 12th largest oil producer in the world and the 17th largest gas producer. In terms of proven reserves, it ranks 20th for crude oil and 41st for natural gas, but its hydrocarbon industry is declining due to the scarcity of easily extractable deposits.

In February, 75 percent of electricity generation was based on fossil fuels, followed by wind energy (7.5 percent), hydroelectric (7.0 percent), solar (4.94 percent), nuclear energy (4.23 percent), geothermal (1.56 percent) and biomass (0.07 percent), according to data from the non-governmental Energy Transition Observatory in Mexico.

Gas production has been declining in Latin America’s second largest economy. In February 2020, according to official data, extraction totaled 4.93 billion cubic feet per day, and had dropped to 4.83 billion 12 months later, and to 4.67 billion in February 2022.

The shortfall forces the country to import gas, especially from the United States, from which it has imported a maximum of 904.6 million and a minimum of 640 million cubic feet every February over the last three years.

For its distribution over a territory of almost two million square kilometers, a network of gas pipelines has been laid in this country of 131 million inhabitants, with 27 state and private pipelines. In addition, the construction of three others has been halted due to opposition from the communities through which they would run.

The recipients of the gas are 50 thermoelectric, combined cycle and turbogas plants, both state-owned and private. In addition, six more combined cycle plants, using two thermal sources, gas and steam, are under construction.

This shows how Mexico has tied itself to gas, despite its climatic effects, and the difficulties of abandoning it in the future, since this infrastructure has a useful life of decades. It also raises questions regarding the increase in international gas prices, due to the Russian invasion of Ukraine. 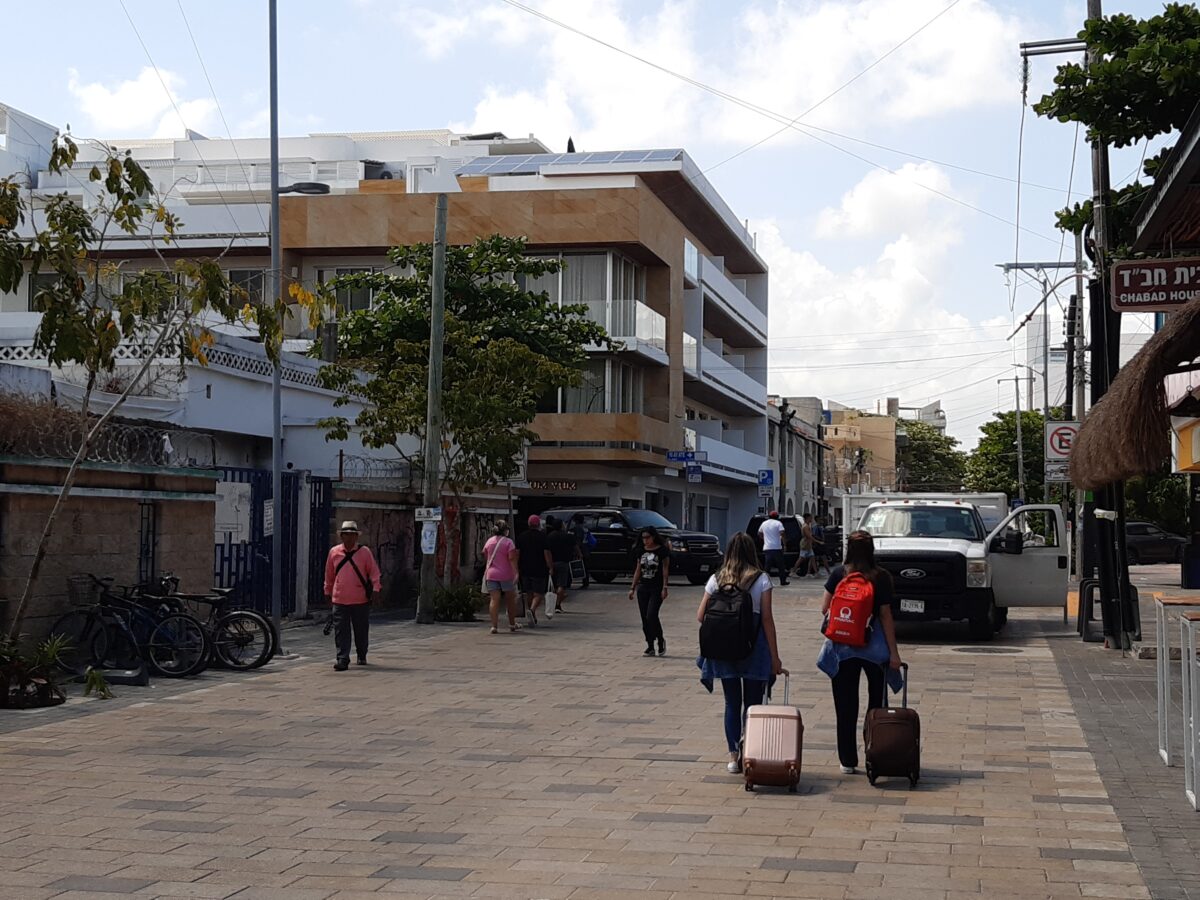 The use of solar energy is still limited on the Yucatán peninsula, despite the high levels of solar radiation. The photo shows a hotel with solar panels on its roof in the city of Playa del Carmen, in Quintana Roo, one of the three states of Mexico’s southeastern region. CREDIT: Emilio Godoy/IPS

In Mexico, the energy transition has been paralyzed since 2019 due to the policies of the government of President Andrés Manuel López Obrador, which have favored fossil fuels and hydroelectric power plants, to the detriment of new clean energies.

In September 2021, López Obrador presented a legal proposal to annul the 2013 reforms that opened the power industry up to domestic and foreign private participation, so that the public sector would resume the direction of strategic planning in the industry.

The projected changes favor the CFE and prop up gas as the preeminent source of electricity.

At the national level, in January, the CFE directly awarded the construction of six combined cycle plants that would come into operation in 2024, to provide a total of 4,000 MW, with an investment of 3.4 billion dollars.

In the case of the Yucatán peninsula, the CFE would need 200 million cubic feet of gas per day for two new combined cycle plants in Mérida and Valladolid, with a capacity of 1519 MW, considering the projected annual growth in demand of between 3.2 and 3.5 percent.

Meanwhile, the peninsula is wasting its available renewable resources.

Bracamontes, the Mérida environmentalist and representative of the global youth movement Fridays for Future Mexico in Yucatán, criticized the waste of renewable energy potential.

“There are many alternatives to take advantage of the sun and wind and solid waste, the disposal of which the state has not solved,” she said. “We ignore all that potential. We must analyze what is best for us and what has the least impact. If we are still married to the idea that fossil fuels are the only way, we are wrong. Sunshine is free.”

The local population also faces energy instability under the current energy scheme. For example, the neighborhood where Bracamontes lives, in western Mérida, suffered three short blackouts in one week.

Like other cities on the peninsula, Mérida also has high electricity rates, even with public subsidies, and unstable electricity generation.

Greenpeace’s Ramírez said the winners of the electricity counter-reform are Pemex and the gas companies.

“The possibility of making a transition to renewable sources and distributed generation is erased,” he said. “We are talking about a model that has serious implications for health, air, soil and water pollution, and climate externalities, which are not in the equation.”