KARACHI, Jan 29 2012 (IPS) - “It was a dark and dingy room, where an elderly woman asked me to take off my panties, made me sit on a low wooden stool with my legs parted and then did something…I screamed out in pain,” recalls Alefia Mustansir, 40, of her childhood experience. 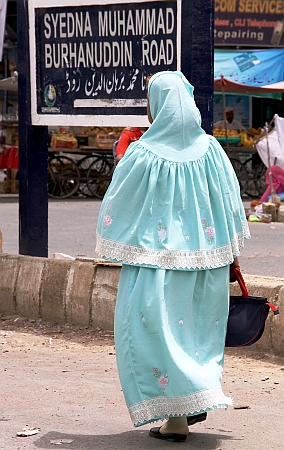 Her friend, Sakina Haider, remembers “putting up a good fight” before she succumbed. “I was told by my grandmother that I was being taken to the doctor to address burning in the genital area when soap went there while bathing!”

Both Haider and Mustansir have refused to have their daughters undergo circumcision or female genital mutilation/cutting (FGM/C), the Dawoodi Bohras’ best-kept secret until young women from the community first began to speak up against it a few years ago.

Bohras, a sub-sect of Ismaili Shia Muslims, are a tight-knit community, with a majority residing in India and Pakistan, and estimated to number two million the world over.

An article in the Dec. 12 issue of the popular Indian weekly ‘Outlook’ says: “Khatna (circumcision) is a tradition the Bohras trace back to their origins in (north) Africa, one they continue with because they see this as an attempt to stay true to their faith.”

The Outlook article goes on to say that “most Bohra women and men even today would rather keep this practice a secret rather than question a custom that is now universally seen as a gross violation of a woman’s body.”

The World Health Organisation defines FGM/C as a procedure that “intentionally alters or injures female genital organs for non-medical reasons.” FGM/C, as practiced in some African countries, may involve removal of the entire clitoris and labia.

The practice persists in 28 African countries, as well as in some Middle Eastern countries with varying degrees of cutting or mutilation. African countries that have banned it include Burkina Faso, Central African Republic, Djibouti, Eritrea, Ethiopia, Togo, Uganda, Kenya and Egypt.

Bohras insist that their practice is not harmful since it is done with care and moderation. Many justify it as a means to curb a woman’s sexual drive and keep her chaste.

Haider finds that argument “highly problematic” and sees it as a way of controlling women.

Dr. Nighat Shah, former president of the Society of Obstetricians and Gynaecologists in Pakistan, finds it hard to believe that a community as “progressive and educated” as the Bohras carries out this practice.

“Medically speaking,” she explained, “a little snip or clip (of the clitoris) may not affect childbirth, but it may rob the woman of sexual pleasure. It is a very sensitive tissue.”

Another gynaecologist and obstetrician, Dr. Shershah Syed, finds no medical benefit to support female circumcision. “I am no religious scholar, so if a community believes it is an Islamic injunction, I’d suggest the girls should at least be old enough to understand the reason so that they can make an informed decision.”

“Why do women’s sexual drives have to be curbed?” Haider asks. “Women who are not circumcised are not necessarily promiscuous!” she says.

A young Indian girl belonging to this Muslim sect, who goes by the name of Tasleem, has now found the courage to initiate an online petition asking the community’s high priest, Dr. Syedna Mohammad Burhanuddin, to have this “cruel, inhuman and undemocratic ritual” stopped.

The petition addressed to the 96-year-old prelate, who is based in the western Indian city of Mumbai, states: “Such a barbaric ritual has no place in a progressive community like the Bohras. So we pray to His Holiness to stop this misogynist ritual.” Mustansir and Haider are in a minority among Bohra women who refuse to accept the practice. Most still get their daughters circumcised because it is an order from the community’s high priest.

“I have blind faith in my leader. I believe there must be some goodness in this that there is so much insistence,” said Zahabia Mohammad, 38, mother of three circumcised daughters.

Mohammad conceded that her own experience was “gross” and “barbaric”, but justifies its continuation because “it is done in a very safe manner today by doctors.”

She was present for all of her daughters’ circumcisions. “It takes less than five minutes and the procedure is done under local anaesthesia. Just a very minute bit of the clitoris is clipped off,” she said.

She acknowledged she had little information on the rite except what was told her by an aunt “that the foreskin of the clitoris is unclean and circumcision is for the benefit of the women.”

She also concedes that today, with a deluge of information circulating against this practice, it is imperative to equip the community with information to enable them to make informed decisions.

“Not everyone will accept this blindly, not the next generation. They will question and prod, so it is important to prepare them,” she says of a rite that is kept secret from male members of the sect.

Arwa Mohammad, who is in her 20s, signed the petition because “it’s archaic and nonsensical.” She was circumcised when she was seven by her grandmother’s doctor friend. “Just goes to show how this ritual perpetuates without anyone questioning!”

Married a year back, Mohammad was “not traumatised” for life for getting circumcised, but cannot comprehend the reason still. “I have friends who have been circumcised like me but have a high sex drive. On the other hand, she admits to “frigidity” in bed.

“The thought of snipping off a bit of a young child’s clitoris gives me the goosebumps,” said 37-year-old uncircumcised Amena Ali. She refuses to put her two daughters, aged six and eight – considered the right age band for circumcision – under the blade.

The petition, put up last October, has opened an animated forum for discussion on both sides of the border, perhaps for the very first time, within the community on a subject that was taboo.

“Initially, only the non-Bohras were signing, but once the media got into the act, many women from the community openly began talking about their painful experience,” Tasleem told IPS in an email exchange from India.

So far, Tasleem has been able to collect 1,059 signatures. “I will keep this going till Dr. Syedna bans it. Raising awareness is the first step towards solving the problem.”

“Whether the ritual will be abolished by this petition, only time will tell,” says Zainab Hussain, 49, but she feels the petition will make a difference. “They (community leaders) may eventually break their silence and give a plausible answer.”