MALAGA, Spain, Sep 12 2012 (IPS) - “It’s possible that two children died so that you could have that mobile phone,” says Jean-Bertin, a 34-year-old Congolese activist who wants to end the “absolute silence” around the crimes committed in his country to exploit strategic raw materials like coltan.

The Democratic Republic of the Congo (DRC) has at least 64 percent of worldwide reserves of coltan, the colloquial African name for a dull black ore composed of two minerals, columbite and tantalite.

Tantalum, the metal extracted from this ore, is a rare, hard, blue-gray, lustrous transition metal that is highly corrosion resistant. It is used in the production of capacitors for electronic equipment such as mobile phones, computers and tablets, as well as in earphones, prosthetics, implants and turbine blades, among many other products. 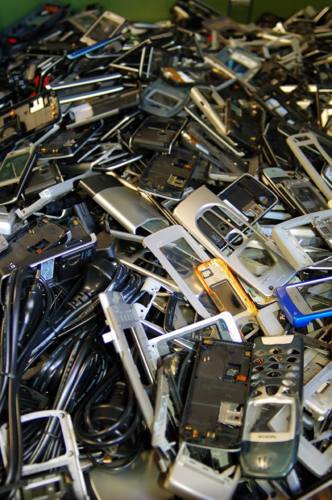 “The DRC’s greatest curse is its wealth. The West and all the others who manufacture weapons have their noses stuck in there,” laments Jean-Bertin, who arrived eight years ago to the southern Spanish city of Málaga from Kinshasa, where his parents and two brothers still live.

The extraction of coltan contributes to maintaining one of the bloodiest armed conflicts in Africa, which has led to more than five million deaths, massive displacements of the population, and the rape of 300,000 women in the last 15 years, according to human rights organisations.

This fact was acknowledged by the United Nations Security Council in 2001, which confirmed the “links between the exploitation of natural resources and the continuation of the conflict in the Democratic Republic of the Congo.”

As of 2003, a Panel of Experts convened by the Security Council had identified 157 companies and individuals from around the world involved in some way with the illegal extraction of valuable raw materials in the DRC.

The exploitation of coltan in dozens of informal mines, scattered throughout the jungle in the eastern DRC, is used for financing armed groups and the personal enrichment of military and government officials.

Artisanal mining, with no controls, is carried out in semi-slave labor conditions and causes significant damage to the environment and the health of workers, including children, according to the 2010 documentary film “Blood in the Mobile” by Danish director Frank Piasecki.

But industry sources, such as the Tantalum-Niobium International Study Centre (TIC), take pains to stress that the coltan reserves in the DRC and elsewhere in central Africa are far from being the world’s main source of tantalum.

Australia was the leading producer of tantalum for several years and production has recently grown in South America and Asia, in addition to production from other sources, such as recycling.

According to the TIC, the largest known reserves of tantalum are in Brazil and Australia, and discoveries have recently been reported in Venezuela and Colombia.

The DRC possesses other forms of natural wealth that are also widely smuggled, such as gold, cassiterite (a tin oxide mineral), cobalt, copper, precious woods and diamonds. Nevertheless, the country ranks in last place on the 2011 Human Development Index.

Faced with this situation, civil society organisations are placing ever more emphasis on raising awareness among consumers of products containing these materials.

In Spain, a network of non-governmental groups and research centres that focus on the DRC launched a campaign in February to demand a commitment from manufacturers that they will not use illegally sourced coltan.

The discovery of new sources of tantalum and recycling should contribute to reducing the demand for Congolese coltan.

The NGO Entreculturas and the Spanish branch of the Red Cross have joined forces since 2004 in a campaign called “Dona tu móvil” (Donate Your Mobile), encouraging the public to drop off their old electronic devices for reuse or recycling of their components. The money raised is invested in educational, environmental and development projects for poor sectors of the population.

As of this July they had collected 732,025 devices and earned more than a million euro, Ester Sanguino, the coordinator of the campaign for Entreculturas, told Tierramérica.

But the organisations and companies involved in recycling consulted by Tierramérica concurred that it would be impossible for this source of tantalum to contribute to meeting the growing worldwide demand for the metal to any significant extent.

Market pressures encourage people to replace their mobile telephones after only a short time, which means that even if recycling took place on a large scale, the tantalum obtained would not meet demand, said a source at BCD Electro, a company that specialises in the reuse and recycling of electronic and computer equipment.

And mobile phones represent just one market segment in which tantalum is currently used.

Apple and Intel announced in 2011 that they would no longer buy tantalum from the former Belgian colony. Nokia and Samsung have made similar pledges.

Samsung states on its website that it has taken steps “to endeavour that our mobile phones do not contain materials derived from illegally mined Congolese coltan.”

Such corporate codes of conduct essentially fill the void left by the lack of prescriptive rules.

The most far-reaching effort in this regard is that of the OECD (Organisation for Economic Co-operation and Development) Guidelines for Multinational Enterprises, since it extends to all of the industrialised nations that are members of this group.

But the long and shadowy paths travelled by Congolese coltan make it difficult to prove whether these codes are upheld.

Illegally mined minerals are smuggled through neighbouring countries like Rwanda and Uganda to Europe, China and other markets.

“Rebel groups proliferate because of the land’s wealth of coltan, diamonds and gold,” said the coordinator of the humanitarian organisation Farmamundi in the DRC, Raimundo Rivas.

Neighboring governments are “complicit” and “up until now this has all been supported and covered up by the companies that benefit from these riches at their final destination,” he told Tierramérica.

“There are many economic interests around the coltan business,” stressed Jean-Bertin, who describes himself as one of the “combattant congolais”, Congolese living abroad who protest and denounce the human rights violations in their country. In the meantime, in the DRC, “the killings are real. The blood is everywhere.” And nevertheless, “it is as if the Congo didn’t exist.”

This is why expectations have been raised by a recent decision of the U.S. Securities and Exchange Commission (SEC), which adopted new rules on Aug. 22 under Section 1502 of the Dodd-Frank Wall Street Reform and Consumer Protection Act relating to the use of “conflict minerals”.

Section 1502 establishes that all national and international companies already required to report annually to the SEC which manufacture or contract to manufacture products containing at least one of four conflict minerals (tin, tantalum, tungsten and gold) must adopt measures to determine their origin through supply chain analysis.

But the first report would not be filed until May 31, 2014, considered an overly long waiting time by human rights defenders, who stress that crimes continue to be committed in the DRC despite the presence of a UN peace mission since 2010.

Holding his six-month-old daughter in his arms, Jean-Bertin is visibly upset as he describes how armed groups in the DRC “give weapons to children and force them to join with one side or the other.”

For Rivas, “the only solution is a strong government in the DRC that can respond to the attacks, and real international support that penalises companies suspected of importing minerals from conflict zones.”