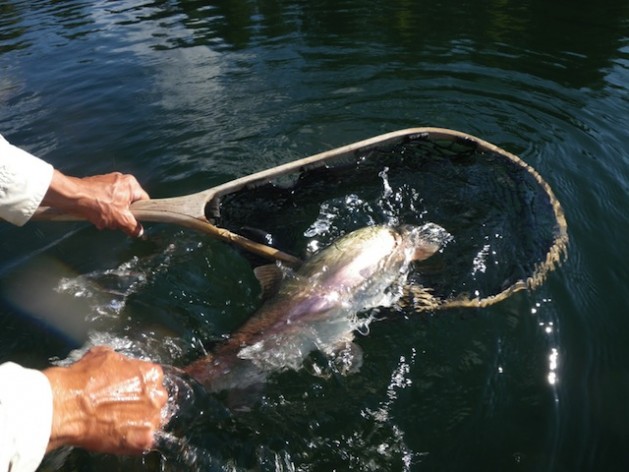 PESHAWAR, Feb 14 2013 (IPS) - The rivers in northern Pakistan’s Khyber Pakhtunkhwa (KP) province were once thick with trout. Spanning hundreds of kilometres, these water bodies played host to the exotic fish, first introduced by the British in the early 1900s, which eventually became a staple in the diets and livelihoods of the province’s 20 million residents.

Over the years, hundreds of state-run hatcheries and private fish farms popped up to rear and harvest brown trout and rainbow trout.

Khan Daraz, a fish farm owner from the Swat valley, located in the north of KP, once earned close to 3,000 dollars a month selling trout in the local market. His family could count on fresh fish on the dinner table every night, and Daraz himself had no fears of ever going hungry.

But over a decade of militancy in the region — which reared its head after U.S. troops toppled the Taliban-led government in Kabul in 2001, sending scores of extremists fleeing across the border into Pakistan’s mountains – gradually destroyed the sector.

Constant violent activity between 2007 and 2009 kept tourists at bay, cutting fish farmers off from one of their primary consumer markets.

Meanwhile, local populations in Swat were uprooted by military operations and forced to flee to the neighbouring regions of Peshawar and Mardan, abandoning their farms and hatcheries.

Heavy floods that swept through Khyber Pakhtunkhwa in 2010, destroyed an estimated 56,000 homes, killed 344 people, injured over 1,200 more and carried off what was left of the fish farms.

It is only now, thanks to a 5.25 million-dollar grant from the United States Agency for International Development (USAID) designed to revive the local industry, that people like Daraz have begun to get back on their feet.

“I never thought that I would be able to restore my business,” Daraz told IPS. “Now I am finally back on the path to success.”

Although Europeans introduced trout to the streams and rivers in the 1960s, it was not until the 1970s and 1980s that the government demonstrated a vested interested in developing robust fisheries in the northern province, Pervez Khan of the Khyber Pakhtunkhwa Fisheries Department told IPS.

Rainbow trout, considered the more resilient of the two species, quickly became more popular but because of their propensity to displace indigenous fish – such as the popular snow trout – and disrupt local ecosystems, they were reared to become sterile in adulthood.

The fish provided a nutritious addition to the local diet, and also enabled communities to supplement their income by “selling excess harvest to local fish stands”, he added.

Because of subsistence fisheries’ vital role in providing food security and a living wage to people in mountain areas like Swat, the government quickly integrated the practice into its broader rural development initiatives.

Two types of fish farms proliferated throughout the region: full farming systems, in which trout are raised from a young stage to adulthood, included hatcheries for breeding and fry production; while partial farming systems were dedicated to growing young fish to market size.

According to a report by the provincial Fisheries Department, 38 private farms cultivating rainbow trout in KP produced 162 tonnes per year.

Prior to 2007, revenue from the sale of market-sized fish in Swat was an estimated 2.1 million dollars annually.

A business census of the private trout farms in Swat in early 2010 found that, by 2006, just before the escalation of extremist militancy, annual farmed production of rainbow trout had dropped from 162 tonnes to an estimated 40 tonnes. By the end of 2007 production had come to a near complete standstill.

In early 2010, trout farmers reported roughly one million dollars’ worth of damages to their farms and hatcheries as a direct result of military activity in the region.

Shah Rasool, who works on a local fish farm, told IPS the collapse of the industry stripped over 20,000 people of their livelihoods.

Muhammad Jawad, a schoolteacher in Swat, told IPS his family used to buy trout twice a week, since it was cheaper than any other meat in the region.

“As the militancy destroyed everything here, we could no longer afford any meat – the imported stuff was too costly.”

The revival effort first began in 2010, as part of USAID’s Pakistan FIRMS Project, an initiative designed to strengthen industries and the private sector, particularly in the country’s politically unstable regions.

The grant aims to “provide technical support for (reconstruction) of businesses adversely affected by the militancy and the 2010 floods”, according to Khan.

“This will be conducted in line with government efforts and the United Nations Food and Agriculture Organisation (FAO)’s National Policy on Fisheries and Aquaculture 2006, through a broad, bottom-up consultation with stakeholders,” he added.

Already, things are returning to normal and the bustling marketplaces are replete with fish stalls and customers rushing to purchase trout at affordable prices.

Khursheed Alam, president of the Swat Fish Farms Association, told IPS that funds, training and technical support in the form of equipment and supplies have all contributed to the revival of the sector.

As of June 2012, construction material, fish feed, fish eggs, and equipment worth nearly 960,000 dollars had been distributed to fish farmers throughout the region.

Aqeel Zaman, a fish farmer who has spent over 10 years delivering fish door-to-door to his customers in the Swat valley, is jubilant about the changes taking place.

“For two years our activities were halted by the militancy,” he told IPS “Now we have taken up our jobs again and the earnings are better than they were in the past”, since farmers and vendors have been trained on how to preserve their produce.