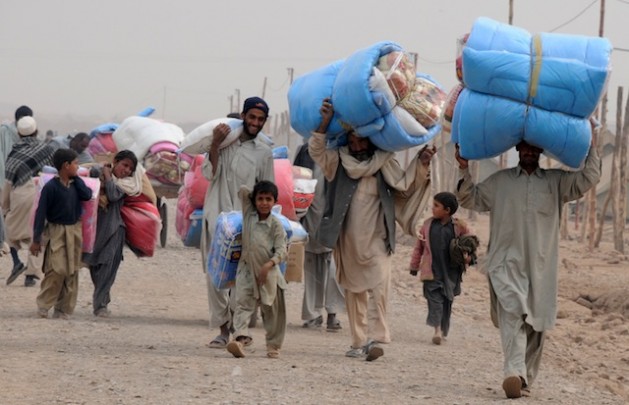 A rise in militancy in Pakistan's Federally Administered Tribal Areas (FATA) has forced residents to flee in search of employment. Credit: Ashfaq Yusufzai/IPS

That is, until a 2006 army operation against the Taliban destroyed his business and devastated the arable land on which he cultivated his grain.

After that, “We couldn’t use our agricultural land,” Shah told IPS. He was forced to sell his property for a paltry sum of money and, in a final act of desperation, sent his sons abroad to work – a decision that ended up completely changing his life.

His sons, both working in Dubai, a city in the United Arab Emirates (UAE), now send home about 1,500 dollars every month, enough for the entire family to live on comfortably.

Five years since the boys left for the Gulf, “I have bought a house in the adjacent Dera Ismail Khan district and started my business again here,” Shah told IPS over the phone.

Shah’s story is not an unusual one. A majority of the 5.5 million people living in FATA have been similarly affected by the decade-old militancy, which began in earnest in 2001 when U.S.-led forces toppled the Taliban government in Kabul, forcing the militants to cross over to Pakistan and establish sanctuaries along the 2,400-kilometre-long border between Afghanistan and Pakistan.

FATA soon became infested with Taliban cells. As Pakistan emerged as a frontline state in the U.S.’ ‘war on terror’, armed forces poured into FATA in a full-scale military offensive in 2005 designed to root out the Taliban.

The army offensive, coupled with the militants’ resistance, made it impossible for civilians to carry on with everyday life.

Now, for the first time in years, people like Shah are finally starting to see improvements in their lives, as remittances from a younger generation of migrants who fled the region in search of employment abroad streams into FATA, easing the financial burden of unrelenting militancy.

Usman Wali once hailed from the Orakzai Agency, one of FATA’s seven tribal districts, which has been battered by endless violence. Life there was hard, with most families confined to their homes by the threat of the Taliban’s activities or army-imposed curfews.

Under the shadow of conflict, “We lost everything we had,” Wali told IPS. Even acquiring the basic necessities of life was a daily struggle, due to a lack of money and mobility.

“One day we decided to leave our ancestral village and take refuge in a government-run camp in the Hangu district of the Khyber Pakhtunkhwa (KP) province.

But life in the camp was like hell on earth, and soon the family of 13 knew they had no choice but to leave. “Then a local contractor took my two sons and a brother to Saudi Arabia, which changed our lives,” he said.

With the help of remittances from his family, Wali recently migrated to the nearby Hangu district and established a booming cloth business there.

“Now, we own a beautiful house and a cement business,” he added.

A daily wage labourer named Ghaffar Khan, from the violence-wracked Mohmand Agency says the radicalisation of FATA and an escalation in militancy ironically brought him benefits.

“In 2005, I earned about five dollars per day but now my daily income is more than 120 dollars,” Khan, who is currently on leave from his job in the emirate of Sharjah, the third largest in the UAE, told IPS.

His house in Mohmand Agency is still intact but his seven-member family has moved to the nearby Charssada district of the KP province due to the deterioration of law and order in their native village.

Khan returns home for a month every year to spend time with his family.

Abu Zar, an official at the FATA Secretariat, told IPS that the militarisation of the region has brought misery to many residents but has also fuelled a wave of migration to Gulf states like the UAE, Saudi Arabia and Oman, which is now helping people get back on their feet.

“The younger generation has been going abroad in droves because of the prolonged insurgency”, in order to escape a sharp decline in trade, business opportunities and income in FATA, he added.

Akhunzada Mohammad Chittan, a lawmaker from Bajaur Agency, says immigrants from FATA have a reputation for being “extremely hard working. Once they land abroad they can earn a lot because they are honest and dedicated,” he said.

About 95 percent of the tribal residents currently working abroad are uneducated, and initially lacked skills, but have performed very well in their new jobs, Chittan added.

“I know at least 500 people who learnt skills such as driving, tailoring and carpentry before going abroad, showing their dedication (to starting life afresh),” he told IPS.

Adnan Ali, manager of a Peshawar-based overseas recruitment agency, says that the demand for FATA migrant workers in the Gulf is growing exponentially.

“Last month we sent 100 young men from different FATA areas to the UAE, Qatar and Dubai. All of them are very happy,” he told IPS.

According to Najamuddin Khan, an overseas employment manager, “We place advertisements in newspapers about various vacancies in foreign countries.

A majority of the respondents are youth from FATA who are desperately looking for work, he told IPS in Peshawar.